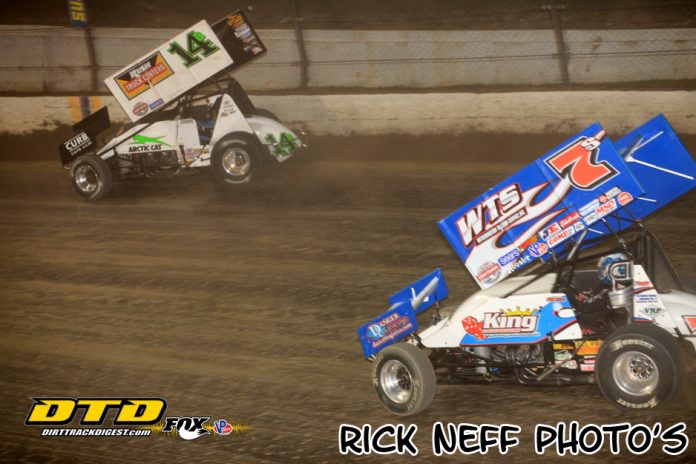 ROSSBURG, OH – Christopher Bell pounded the cushion to perfection up against the Eldora Speedway wall to win his fourth career World of Outlaws Craftsman Sprint Car Series Feature, but first of 2018, Sunday evening at the Ohio half-mile. Bell fell as far back as eighth but took the lead on Lap 14 and never looked back. Donny Schatz extended his Series points lead finishing second for a Tony Stewart Racing/Curb-Agajanian Racing one-two punch. Parker Price-Miller, who led the first 13 laps, completed the podium.

Tim Shaffer won the Sears Craftsman Dash and led the field down the backstretch, but a strong sweeping move across the racing surface from Parker Price-Miller saw the youngster lead the opening lap by a nose.

Carson Macedo, aboard the Jason Johnson Racing No.41, took second from Shaffer on Lap 9 and began closing in on Price-Miller for the lead.

Christopher Bell fell back from his fifth-starting spot on the initial start, but began his cushion-pounding charge forward immediately. As Macedo passed Shaffer for second on the ninth circuit, Bell re-entered the top five. Two laps later, Bell was third and visibly closing on the leaders. Bell passed Macedo for second on Lap 13 and took the lead the following lap from Price-Miller in turn one.

From there, Bell set sail, rim riding his way to a sizable advantage through lapped traffic.

Donny Schatz worked his way forward from his eighth starting spot to take third just past the halfway point.

The lone caution of the event flew on Lap 21 for a slowing Aaron Reutzel, setting up a double-file restart.

Price-Miller, who had fallen back to fourth, got an excellent restart and challenged Bell for the lead before settling into second. Bell once again powered away from the field, establishing a sizeable lead over the field.

Schatz went to work on Price-Miller for second, completing the pass with one to go. At this point, his TSR teammate was gone, as Bell cruised to win by over four seconds.

“I’m very grateful to run this thing, it’s a rocket every time I come to this place. It was so fast on the top, I could zoom right around,” Bell said in Victory Lane.

When asked about riding the wall at Eldora with a near-perfect race car, Bell didn’t hold back saying, “It’s the most fun thing you’ll ever do.”

“It’s a dream come true to be able to win World of Outlaws races at Eldora,” Bell, who was making his fifth Outlaw start of the season, added with a smile.

Donny Schatz settled for second for the second consecutive night and was pleased with his car, “My car was really good. These guys keep working on it and making some gains, it was great to have some grip out there.”

Parker Price-Miller, in one of three Indy Race Parts entries, held off Macedo to complete the podium, “We were really good, when you are out front, you don’t know how strong you really are, and Christopher blew my doors off. He was the class of the field. I can’t thank Bernie and Betsy enough for giving me this opportunity.”

Macedo, who will return to the JJR No.41 at Port Royal in two weeks, finished fourth with Ian Madsen completing the top five.

Sheldon Haudenschild charged from 18th to eighth and Logan Schuchart earned KSE Hard Charger honors coming from 20th to ninth. Pennsylvanian Brock Zearfoss, who will finish out the season following the Outlaw tour, completed the top-ten.

A night after breaking a 19-year-old track record at Terre Haute, teenager Gio Scelzi was within striking distance of the 16-year-old Eldora track record in Qualifying, missing it by seven hundredths of a second.

It was an early start at Eldora, which was coming off a double-header World 100 program the night before, with the Outlaw Feature ending before 7:30 on a brisk October evening.

A rare off-weekend for the NASCAR Xfinity Series allowed Bell to compete back in his dirt track roots. Bell currently leads Xfinity points and recently set the single-season win record for a rookie with six. Bell finished 11th last night at Terre Haute.

The World of Outlaws Craftsman Sprint Car Series returns to action next weekend with a pair of dates in Kansas, starting Friday, October 19 at Lakeside Speedway in Kansas City for the FVP Platinum Battery Shootout and concluding Saturday, October 20 at Dodge City Raceway Park in Dodge City, KS. If you can’t make it to the track, watch all the action LIVE on DIRTVision.com!