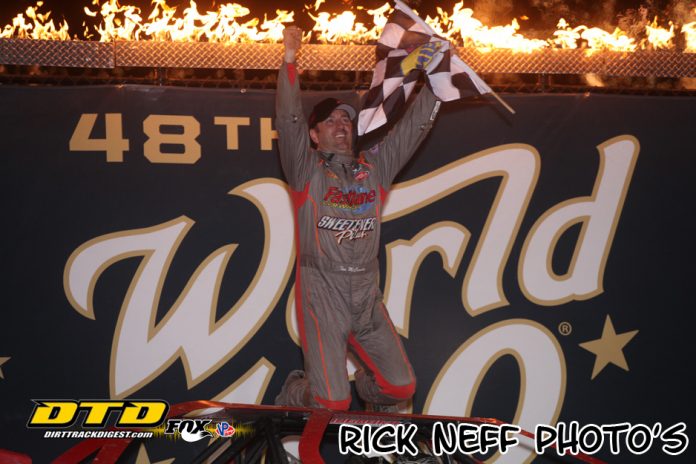 In the back corner of the pit area at Eldora Speedway sat an older dually pickup and small trailer.  In this unlikeliest of spots was where the celebration was occurring after Tim Mcreadie won the biggest event in Late Model racing, the World 100. Even though there were much flashier teams in the pit area that likely had not faced as much adversity as
McCreadie had over the past year. The joy was evident as McCreadie discussed his winning run at Eldora on Saturday.

“It’s everything man, its everything they say it is,” McCreadie said about winning Eldora coveted globe trophy and $51,00 payday. “It’s the one you want to win and the one everybody covets, right? I come here a lot and try to pretend it’s not as big as it is because I didn’t grow up in late models, but it is everything. Its electric when you go out for
the heat, its nerve racking, and for us to finally win it is surreal.”

Surrounded by massive trailers throughout Eldora’s infield McCreadie had one of the 10 smallest, rustiest haulers in the pit area with no backup car to fall back on if he encountered major problems.

“We just try to do our best and we’ve done it with that little truck and trailer over there for five or six months, said McCreadie. “It’s hard. It’s very hard. The focus is on one car, but you only have one car. We left a $200,000 to win race after Friday because we had no cars. It’s tough to do it that way, but it will just show these guys with Longhorn and the guys back home that we are on the right track with the same team last year that was winning a good bit of races. We just need to get refocused and keep working hard.”

Even with those things weighing on his mind McCreadie did have a good feeling based on his performance at the Dream at Eldora in June leaving with a top 10 finish and feeling they were close to contending.

“We came here at the Dream and tried a setup that we thought was really good,” said McCreadie. “We ran sixth at the dream and I told the guys afterwards I truly believe our car is capable of winning. We just needed to tune on somethings.”

During the rescheduled date for the World 100 in October the Friday program was rained out again, leading to the preliminary event being contested on Saturday afternoon before the finale later that night. McCreadie had an up and down day that saw him make a redraw position after several drivers did not proceed to post-race tech and eventually a podium finish in one of the twin 25-features, yet McCreadie felt he was not fast enough in that configuration to contend in the World 100.

“When we unloaded it here for hot laps and qualifying we hot lapped great and qualified terrible,” said McCreadie of the Saturday afternoon program. “We made it through the heat, but we decided to take it all off for the feature and put in stuff we had run before. Just because we thought starting outside pole the way the track works if you get a run you can hold people off. They dropped the green and we were dead in the water. We didn’t have movement in the car or nothing. Jimmy passed us and then it latched up at both ends and then it just made us better. They were all too tight in the rubber and I could just cut right through it, so once that happened we got out and I told (his crew) and they said
the same thing, they said ‘man, your car is flat’.”

McCreadie was able to win his heat race and move his way to the front  just past half way in the 100 lap feature. After building up a lead of over five seconds McCreadie’s winning story appeared to be disrupted with a caution flag with just 16 laps to go. McCreadie was up to the challenge though and continued to drive away from the field following the restart.

“I probably put my best three laps together right after the restart and they were taking so many pictures I assumed he was right behind me and I guess we were inching away, but I didn’t know it,” said McCreadie. “I’ve been racing long enough that if the photographers start taking pictures all the way around the track its either the end of the race or there is somebody right up you.”

The final lap McCreadie spotted his crew and knew winning the World 100 was likely going to become reality.

“When I came down the backstretch on the while flag lap my crew guy was spreading the sticks apart and that’s a good feeling.”

After it was all said and done the normally outspoken McCreadie was lost for words, but the joy and relief of winning such a major event like the World 100 was evident.

McCreadie also was quick to credit his longtime sponsor, Sweeteners Plus, for all the support they have given him during a very unusual route from East Coast Modified Racing to Late Models.

“I won’t even be in a late model if it wasn’t for them,” said McCreadie. “They had the cars when I first got hired there. I thought we should try it and that led to running for a rookie of the year title and we were not even ready to run Late Models. That led to winning a title a couple of years later and that led to what I’ve done. Even a chance to drive big time stock cars, so it led to a lot of things. I owe all of it to Ann and Carl Meyers, Vic Coffey, and Sweeteners. Now we’re at the point that we just need to forge ahead and figure out what we really want to do with this team and what we really want to do period.

For McCreadie winning the World 100 turned out to be his biggest racing accomplishment and still appears humble that people appreciate his driving talents.

“Next to my wife and my kids and stuff like that, which we’ve grown together as a family, you miss that, and you miss things that crack you up. It’s not as good as that, but it’s as close of a second as you can get to that. It’s crazy to have people collectively think I’m pretty good at what I do or jump for joy for me or be happy. Everybody deserves a little happiness every now and again.”