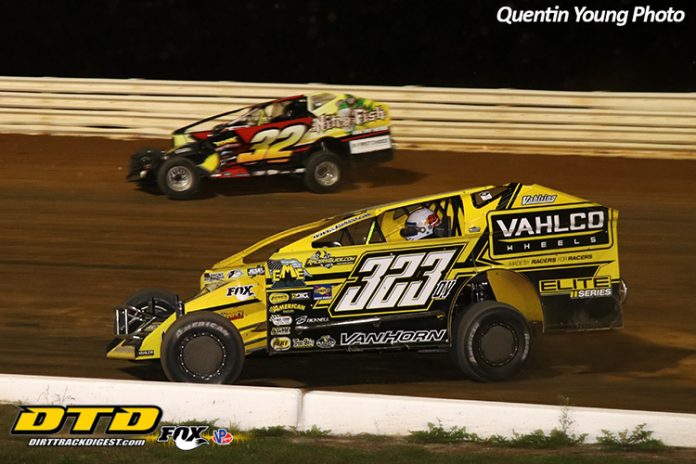 After a very long absence dating back to the 1980’s, the Modifieds made their return to the new and improved Port Royal Speedway. Promoter Brett Deyo brought his traveling Short Track Super Series to the Juanita County dirt oval and to say the show was a success would be an understatement. Paired the mighty winged 410 sprints, the racing was tremendous as the ground pounding Modifieds put on a show for the central, PA fans as they battled one another on the multiple grooved 5/8’s red clay oval.

Deyo took a chance bringing his STSS Modified series to Sprint Car country three years ago at the Susquehanna Speedway (now BAPS) and the series had done well with great crowds and even greater racing. When the opportunity was presented to Deyo to bring his series to Port Royal, he was a little hesitant at the time not wanting to over saturate the Central PA market. By spacing the races, a couple of months apart the hope was that wouldn’t be the case. Well, after Friday’s rousing success, that thought can be put to rest. Deyo along with the track management of Port Royal did a wonderful job getting the night’s events run off in a fast pace on a cool October night.

The facility was topnotch, with a track surface that provided multiple grooves for racing. The LED lighting system makes you feel like you watching a day race. Every driver that was interviewed during the night had nothing but praise for the track and facility. The most common comment heard from the drivers was that I hope we come back next year. I second that notion, as a first-time visitor to Port Royal I was very impressed by the track and the facility.

Watt on Point at the Port

When the racing was completed it was once again that driver who can’t seem to win big races Ryan Watt standing in victory lane at the inaugural event.

Watt started the feature from the 10th spot and quickly moved into the top five as Duane Howard and David VanHorn battled for the top spot in the opening stages. Watt settled in their content to save his tires for a second half run. While Howard and VanHorn waged war upfront all eyes were on the No. 32 of Brandon Grosso as he rocketed his way through the field using the extreme outside line to take the lead on lap 21 from VanHorn.

“We tried to take it easy there early on,” mentioned Watt. “Cars were all over the place and I knew I could run a little faster but I saw Grosso running up there and he almost got pinched a couple of times so I just wanted to take it a little easy there so we had tires at the end and I really wanted to try to make sure we didn’t get involved any wrecks.”

After a lap 23 caution for a spinning Brett Kressley, it was Watt’s turn to make his way to the front. Watt slipped under Howard and VanHorn on consecutive laps to leap into the runner-up spot. Now it was time for Watt to turn up the wick as Grosso kept hustling the high-side as he started to approach lapped traffic. Grosso hitting the lapped traffic was the break Watt was looking for as the laps started to wind down. Watt was finally able to pull up to Grosso’s back bumper with five laps to go as the leader was having troubles negotiating lapped traffic.

Watt made his move to the inside of Grosso with three laps to go and as the field took the two to go flags from starter Warren Alston, Watt was the new leader of the race. A yellow with one lap to go gave Grosso a chance to redeem himself, but Watt had it all under control as Grosso tried his best to go around Watt going into turn one on the restart. The veteran Watt never flinched and went on to take the popular win along with the $5000 plus first-place prize.

“I could see we were catching him with about 10 to go but I wasn’t sure if I was going to have enough time to get by,” Watt explained about his winning move. “Then I could see as he was reeling in the lapped cars that they were running up top where he was so that slowed his momentum quite a bit. I saw he tried to go to the bottom on the one lap but he wasn’t that good down there. I just kept working the middle and by doing that I think I was able to keep my tires a little cooler.  Finally we were able to slide by him to get the lead. Grosso ran a great race and it’s a shame he couldn’t hold on there, but he’ll get one eventually.”

As far as the facility goes, Watt had nothing but praise for the track and the speedway in general.

“This facility is awesome! The lighting here is phenomenal, the race track surface was great. There was a top, bottom and middle groove. The heats are what they are and as the cushion moved up everyone just ran the cushion but for the feature that track was phenomenal. You could race anywhere. I really hope we come back here next season.”

Watt may have won the race, but it was the young Grosso who stole the show Friday night at the Port Royal Speedway. Running the high-line to perfection Grosso rocketed his way to the front in a fashion that would’ve made any USAC dirt driver proud as he hung his No. 32 up on the cushion sometimes even leaning the right side of his rear bumper up on the fence.

“On lap three we already dropped back to ninth after starting sixth,” Grosso explained on his decision to start running the top. “We weren’t good and I remembered watching Peter Britten run Oswego and he kept hammering the top to try and find a line up there.  It looked the same with the way the walls are and everything. I had nothing on the bottom so I just decided to try it and see what happens. We had a hard tire on and once it got hot, the car just took off.”

It was quite a display of driving for the second-generation driver as he had the crowd on their feet while zipping around the outside and passing the likes of Watt, Howard and VanHorn as he marched his way to the lead. Once in front, Grosso continued to rim ride the speedway and extend his lead.

Unfortunately for Grosso, his car worked the best on the high-side and as approached lapped traffic he was finding cars using the same lane which was slowing his momentum. This allowed Watt to eventually catch and pass Grosso for the win.

Grosso had one last chance to grab the lead back on a restart with one to go but the enthusiasm of the young driver got the best of him as he went for broke at the drop of the green and pushed it a little too hard going into turn one and started to bounce off the wall allowing both Vanhorn and Howard to get by and knock him out of a podium finish. Grosso hung on to finish fourth but was very disappointed afterwards as he had time to reflect on what could’ve been.

“Yeah, I was just trying a little too hard there on that last restart and just got up too far out of the groove,” cited Grosso. “The lapped cars killed me, they were throwing the blue flag but they wouldn’t move down so I had to go to the bottom where it was slick and the only place I was good was on the top. I don’t know how big of a lead I had but he (Watt) caught me pretty quickly. Just a very disappointing finish.”

Bad to Good for Pauch Jr.

The last time Billy Pauch Jr., drove the Pasqual Racing No. 3, the driver ended up on his roof at the Albany-Saratoga Speedway. The newly formed team was looking for a much-improved outing this Friday night at Port Royal Speedway.

After timing third fastest in their group, Pauch was scheduled to start on the pole in his heat race after the invert. Unfortunately, when it came time to hit the track for his heat race, the recently built car refused to fire forcing Pauch to be pushed back into the pits. It was not a great start for the team.

The team went to work to diagnose the problem and after making the necessary repairs Pauch headed out for the consolation race. The car was fast right from the start as Pauch easily advanced into a qualifying position locking him into the 40-lap main event.

At the start of the feature event Pauch went to work immediately and quickly drove the car up into a top ten running position. For the remainder of the race Pauch raced in and amongst the sixth thru tenth spots before ultimately crossing the finish line in eighth after a hard battle with his legendary father Billy Pauch Sr., who got the best of his son on this night. All of the team’s hard work paid off in the end as Pauch Jr., earned the hard charger award for his driving efforts.

“The team put this car together in a week and a half and the ground cable just came loose,” said Pauch Jr.  “Stuff like that happens sometimes. For what we had I am tickled pink, this car was really good all night. I thought I had a shot at a top three but we got a little loose and it started hanging on me a little bit. It was good to have a good run for this team. We’ll run this same car on Thursday night at Orange County in the Deyo show and save the good car for the (Eastern States) 200.”

Rick Regalski made the long tow from western Pennsylvania. Unfortunately, Regalski was a DNQ for the night…

Anthony Perrego was a DNQ also in the No. 12 owned by Gary Simpson when engine issues arose…

Richie Pratt Jr was in the field driving the Danny’s Pizza Pizzazz No. 51, formerly piloted by Billy Pauch Jr. Not a good debut for pairing as Pratt was a DNQ…

After running a SpeedSTr on Friday afternoon for the first time at Selinsgrove Speedway, Ryan Godown was an early arrival at the speedway. However, the team’s hauler carrying the Dieter Schmidt No. 5 was late getting to the track due to heavy traffic. The car finally arrived just in time for Godown to hit the track for his timed warm-up session…

Andy Bachetti, who has been driving TEO ProCars for the many seasons debuted a new Bicknell chassis No. 4 on Friday night. After a solid qualifying effort in his heat race to garner a redraw position Bachetti started ninth in the feature event. Mechanical issues forced the team to make multiple pitstops during the race putting a damper on the cars debut…

There is only one race remaining for the STSS South region with that being on October 26th & 27th at Georgetown Speedway for the Mid-Atlantic Championship Weekend. Going into the final event Ryan Watt is the points leader (565) over David Vanhorn (-43), Craig Von Dohren (-65), Duane Howard (-73) and Matt Sheppard (-74). Watt will be aiming for his third STSS South region title in four years…