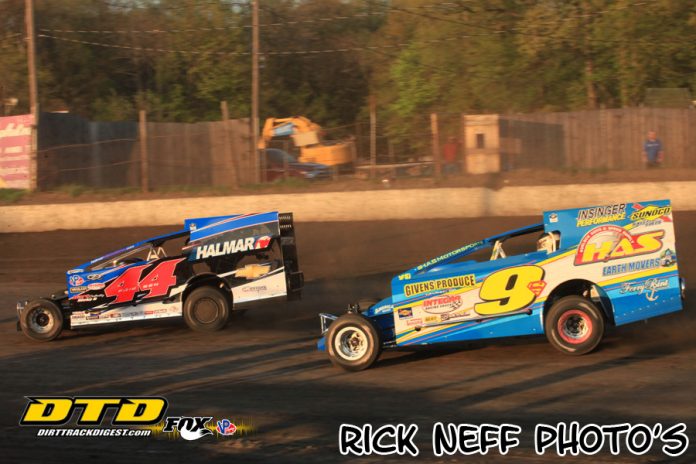 Just like last year, the Hard Clay Finale for the Short Track Super Series will kick-off the 2018 version of Eastern States Weekend. This year’s edition features the Modifieds in conjunction with the 360 Sprint Cars. It’s an awesome night of racing to get one of the best Modified event weekends of the year under way.

Coming into the event the point chase is a good one. Billy Decker leads all challengers in the point standings. He leads Orange County regular Anthony Perrego by 30. We should be in for a great end to the North Region for the series.

Before we get to Eastern States Weekend, DirtTrackDigest.com takes a look at the event with information that includes the format, purse, history, favorites and more.

Heat-race lineups will be determined via a draw for position at the pre-race drivers’ meeting. Top qualifiers will transfer to the redraw; other remaining qualifiers go to the main-event.

Consolations, with top finishers transferring, will set the remainder of the 28-car starting field.

Heats and consolations are eight laps in distance. There will be two series provisionals from STSS North Region point standings will start 29th and 30th in the feature event.

Stewart Friesen: The STSS has visited the Orange County Fair Speedway on six occasions including the Hard Clay Open and the Hard Clay Finale. Friesen has won three of those six. It’s hard to not to think that he’ll find his way to the win on Thursday night before challenging for the small and big-block Modified titles over the weekend as well.  You’ll see his name a lot the next couple of days.

Andy Bachetti: Bachetti, the multi-time STSS champion, is a former Orange County regular and a two-time winner in STSS action at the track. He’ll be in contention as he was last year in the event. It wouldn’t be a surprise if he found his way to the win on Thursday.

Anthony Perrego: Perrogo has been the man to beat at OCFS in 2018. The Montgomery, N.Y., pilot dominated the track this season. He won the big-block title and came up three points short in the small-blocks to Brian Krummel. He’s also second in STSS North Region points. He’s going to be in the mix at the end.

Billy Decker: Decker has yet to win a STSS event. He comes into Thursday night as the point leader as he chases his first series title while driving for Jeremy Smith. He knows how to win big races at Middletown. He’s been on the podium with the series in the past in OCFS events, so another podium or his first win wouldn’t be a surprise.

Matt Sheppard: It’s hard to believe that OCFS is one of the tracks that Sheppard hasn’t won at. He’s won at nearly every track that he’s raced at. He needs some help in the point chase as he looks for the North Region title. A win on Thursday isn’t a stretch for the Waterloo, N.Y., driver if he can just get some luck.

Tommy Meier: Meier has been on the podium in 50 percent of the STSS events at Orange County including a win. Meier is one of the best ever to compete at Middletown winning a title in every division he’s competed in. He could pull off the upset. Orange County is the home of his only series win. You never know, he may leave Thursday night with another one.

Tire Wear: In 2017 version of the event tire wear was a factor with several of the top runners getting a flat during the 50-lap feature. Eventually, as mentioned, Friesen went on to claim the feature. Will it be more of the same in 2018 or will the new track surface change how things go? That remains to be seen, but the reviews from other races tell a different story as tire wear isn’t nearly what it once was. Either way, last year’s event was exciting as you didn’t know who was going to get to victory lane.

Weather: Thankfully the long range forecast for the weekend looks pretty good. It’s going to be cold but the racing should get in as there isn’t any rain on the radar. Yes, I just jinxed it. Let’s hope that holds true as you never know when you get to fall racing.