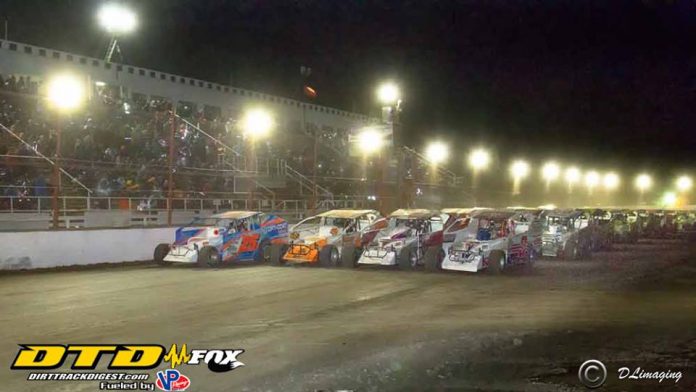 Once again the Brockville Speedway’s Fall Nationals didn’t disappoint with a capacity crowd for this annual two-day event. The 10th addition of the Nationals, which added the first RTD Trailers Bullringer 110 to this year’s event, proved to be the crowd favorite. The weekend of racing started off on Friday, October 12, with the Super DIRTcar Big Blocks. Erick Rudolph, one of the most talented drivers to ever come out of the Ransomville, NY, area, picked up the win.

Rudolph battled hard trying to keep up with early race leader David Herbert in the “ONE” car. Hebert, the man to beat, was on a tare, having dialed the car to track conditions, was in total command but on lap 66, disaster struck. Herbert’s car slowed, relinquishing the lead to Rudolph, allowing the Ransomville native to come home with the Loud & Dirty Brand Fall Nationals’ win unchallenged. Peter Britten came home in second, followed by the “Doctor” Danny Johnson in third. With this visit to victory lane, Rudolph moves ever closer to challenging Matt Sheppard for the Championship, which now moves on to Charlotte, S.C., on November 1 to 3.

Friday’s racing also hosted the DIRTcar Sportsman Series race, won by Martin Pelletier, giving the young Quebec driver his 24th win of the season. The 50-lap feature also saw the crowing of the 2018 DIRTcar Sportsman Champion, Kevin Root, who came across the finish line in 6th place but giving Root enough points to clinch the title. The capacity crowd also witnessed Jocelyn Roy taking home the 2018 DIRTcar Pro Stock Series Championship. This was his third Championship, after coming home fourth in the feature race, won by C.D Beauchamp. Beauchamp, having more feature wins in the series fell short on claiming the title by just 38 points

Saturday’s portion of the weekends’ racing would see two more champions crowed along with the inaugural running of the “Bullringer 110,” worth $10,000 to the winner. The first feature of the day was the Open 360 Sprint car race. The 24-car field was led from green to the checkered by 2018 ESS Sprint car champion Steve Poirier. The eight-time ESS champion went unchallenged and crossed the line, 3.4 seconds ahead of second place Jeff Cook in the No. 10. Jason Barney, the 2017 series champion, rounded out the top three.

Up next was the last chance for the 358 Modifieds sponsored by Engine Research, won by Brian McDonald in car 151. The win transferred McDonald into the final position for The Bullringer 110. The main event on Saturday was up next, the RTD Trailers “Bullringer 110” with $10,000 up for grabs. With such a large purse on the line, several of the big named-drivers stayed over after the Super DIRTcar Series big-block show to try and capture the biggest prize of the weekend.

With drivers like Matt Sheppard, Erick Rudolph, Gary Tompkins and Larry Wight going to battle on the 3/8-mile oval, all in hopes of taking home the top prize.

The RTD Trailers “Bullringer 110” lived up to its name with several dramatic lead changes as the race unfolded.  Sheppard took the early lead after the start but was challenged after an early race restart due to a caution. Quebec’s Steve Bernard charged past Sheppard on the green, taking the lead but was quickly passed by Rudolph who would then maintain the lead for the majority of the race. The last 20 laps would define the race as tire wear came into play.

Steve Bernier, Mario Clair, Ronnie Davis III, and Jordan McCreadie all lost right rear tires as the laps clicked. On lap 105, disaster struck the leader Rudolph when he pulled into the pits during a late race caution, to what appears to be a rear flat tire, handing the lead over to Canadian Mat Williamson. Once the race went green again, Williamson raced his way to victory 2.7 seconds ahead of veteran driver Tim Fuller, followed by Larry Wight in third.

“This is an awesome win for us,” explained Williamson. “We had a last lap loss last week at Thunder Mountain, but this makes up for that disappointing loss and finally gets the gremlins off our backs here at Brockville with some past disappointments.”

With this win, its now off to Orange County Fair Speedway this coming week the team, Mat went on to explain. Long-time racer and 2018 track champion Danny O’Brien claimed his fourth Ogilvie’s Auto and Fleet 358 Modified Championship, after finishing in 13th, in the 110 Feature which gave O’Brien enough points to claim the series championship. The Ogilvie’s Auto and Fleet final race was a part of the Bullringer 110 as it was rescheduled due to weather earlier this year, and made a part of the 110 Feature. After accepting the accolades of winning the series, O’Brien announced to the fans that his 32-year career of racing has come to an end and it was time to move on to other things in life.

I asked Les Hatz of Loud & Dirty Brand and primary sponsor of the 2018 Fall Nationals what he thought of the event as a whole. “For someone who has never been directly involved with this sport previously, it is very impressive, to say the least. The quality of racing is excellent and the fans are great! It turns out that our line of clothing fits this sport just perfectly and we look forward to building our presence throughout dirt track racing in the coming years.”

It was a great weekend of racing and entertainment all around. Paul and Cheryl Kirkland accommodated over 300 motorhomes and campers along with all the race fans for the weekend. The event was wrapped-up with their annual “After Party” with live music and bonfire — a fitting end to a great weekend and season of racing at the Brockville Speedway.