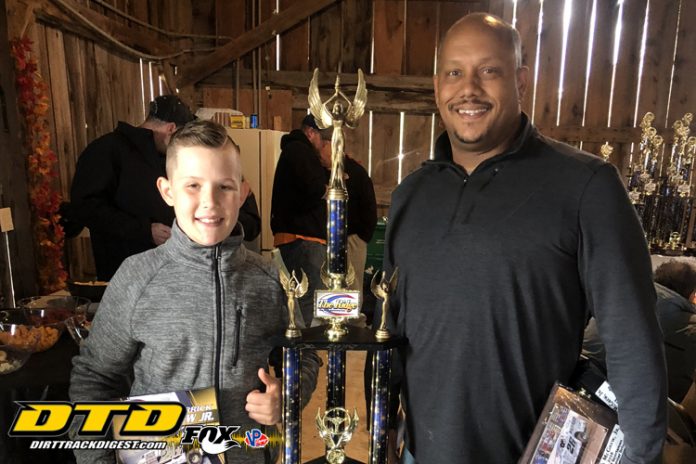 This weekend brings us back to one of the rich traditions in our sport, the 57th running of the Eastern States 200 Weekend. Looking back on the prior 56 events we came up with one interesting fact; seven drivers have won over 50% of the Modified events, Brett Hearn with 12, Danny Johnson, six; Will Cagle, four; Frankie Schneider, three and Frank Cozze, Gerald Chamberlain and Jimmy Horton with two.

We also search info on the small block portion of the weekend, Saturday’s headline event. This portion of the weekend was added in 1977 and six drivers have won 78% of the 41 events. Leading the way once again is Brett Hearn with 16 wins, Danny Johnson with five, the late Doug Hoffman with four, Kenny Tremont with three and Stewart Friesen and Jeff Heotzler both with two each. We are looking forward to our fourth visit to Orange County this season and anticipate the improvements since our last trip. This past Saturday the track on the hill, Glen Ridge, held their year ending banquet. It was easy to get to as it was held very near the race track at Eion’s Hideaway Pavilion located across from the pit sign in area at the track. Once we were inside we saw a large crowd of racers, crews and owners on hand to celebrate the year’s accomplishments. In talking with Promoter, Ray Sefrin, he said he was pleased with the turnout of over 150 people. Maybe it was the more than $18,000 in point fund money that brought many out on the chilly afternoon.

Before the meal got under way, the track announcer, Jay Severson called young Derrick McGrew, Jr. to the front, saying that the young racer had to leave the gathering early to participate in a football game, so they would be giving him his awards before the meal. Young McGrew, Jr. received accolades for the Limited Sportsman Championship, (nine wins) Rookie of the Year and Ultimate Fan Favorite, no bad for an eleven-year-old.

After a delicious meal including several varieties of food the awards were next on the menu. Track Champions for each division received a huge trophy and envelope. Dave Constantino received the Crate Modified Championship award, (10 wins); Luke Horning was the Pro Stock Champion, locally Ivan Joslin was second and also collected the Most Popular Driver award in the division. Malcum Warner was fifth in points, and Andy Graves, eighth. In Street Stocks the Champion was Steve Cosselman, second was Cliff Haslun. Haslun also received the Most Popular Driver award in the division and the Omar Richer Award for Sportsmanship for his dedication to the track and his willingness to help everyone. Also in Street Stocks Kenny Hollenbeck was sixth in points. P. J. Bleau was the Champion in the Dual Cam Four Cylinders division, in fourth was Andy Graves. The Single Cam Four Cylinders division saw C. J. Shepler as Champion. In All Star Slingshots Mike Hill was Champion and Danny Ballard was second. In Jr. Slingshot, Garrett Poland received the Championship award.

Also announced at the banquet, longtime supporter of The Ridge, Bill and Cindy Yurkewecz of Yurkewecz’s Auto Crushers will be the official title sponsor of the 2019 Pro Stock division. We made our way to the meeting with the new Fonda Speedway promoter, Brett Deyo and his crew on Monday night. The meeting was predominately for those interested in working for the speedway next season and that wasn’t us but we have known Brett for many years and have a great interest in seeing Fonda continue it’s historic tradition. An estimated 150 people were on hand and from those we spoke with it was a positive experience for all. The new team also felt that things moved in a positive direction and they look forward to continuing.

Racing lost a fan way to soon this past week, Craig Champion, son of Don and Diane Champion went home to the Lord. Many may remember Craig working with his dad, Don at the Fonda side gate during the Compani era of the track. Don and Diane have been dedicated fans at Fonda for many years, sitting in their chair seats on the concrete patio in front of the historic grandstand. Craig is also survived by his wife Jennifer and daughter, Reagan. We sent our condolences and prayers to the Champion family.