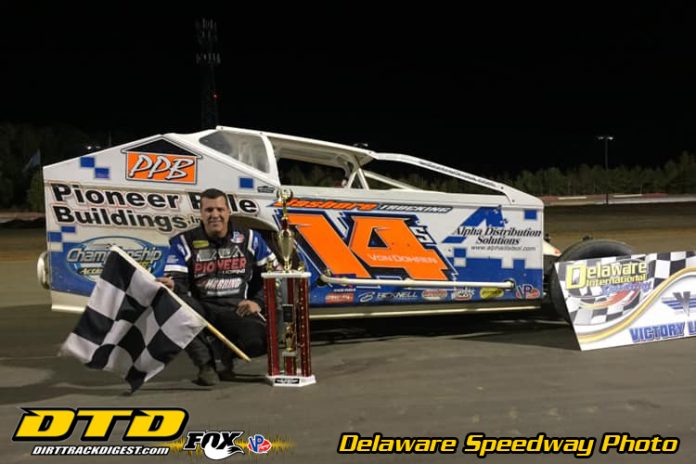 DELMAR, DE – By virtue of the redraw, Craig Von Dohren started from the pole position and held off many challenges from Ryan Watt and lapped traffic to capture the Delaware State Dirt Track Championship Small Block feature event, pocketing more than $5,000 with the gambler’s fee and lap money.

“We had a good car tonight,” said Von Dohren in victory lane. “The track was a little different then how we are used to, so we threw some things at it.”

From the drop of the green, Von Dohren controlled the feature event, with Jamie Mills challenging Ryan Watt on the top of the racetrack for the second position. Mills would complete the pass in turns one and two, with Watt diving back to the bottom in turns three and four to regain the second position.

The top three; Von Dohren, Watt, and Mills, filed out, while Neal Williams, Carson Wright, H.J. Bunting and Brad Trice were all fighting for a top five position.

By halfway, Watt was beginning to put serious pressure on Von Dohren, closing to the bumper of the Dick Beaver No. 14s, but unable to make the pass as Von Dohren would power off the corner.

With ten laps remaining, the top two contenders were challenged with dense lapped traffic, who were also racing for a top-ten position in the feature event. Von Dohren and Watt would swap the most strategic lane each lap to try to negotiate the cars, with little success. Finally, Von Dohren cleared the lapped car and put one more obstacle between him and Watt.

Only the fourth caution of the event, and the first caution in the second half of the event would wave on lap 47 for a spinning car.

A single-file restart would shape up, but would be no contest for Von Dohren, as he collected the checkered flag and $5,000 plus payday over Watt, Mills, Williams, and Trice.

“I did not know how far out we were when we hit lapped traffic,” said Von Dohren. “They are racing for position too, so it was tough.”

“We could stick with him (CVD), but we could not pass him,” said Watt in post-race interviews. “At the end I tried the outside, then he moved up. I wish there was a little more track in turns three and four.”

Many drivers could race the top and bottom surfaces of turns one and two, but had to revert to the bottom of the track in turns three and four.

Jamie Mills, who has spent more time out of a racecar then in this season, rebounded with a solid top three, stating, “These guys (CVD and Watt) had it covered. We were a third-place car tonight.”

Each of the top-three will try to repeat their performances in the Big-Block feature event. Von Dohren and Watt with separate big blocks and Mills attempting to qualify his small-block for the event.

Kirk Lawson drag raced Joe Tracy for nearly half of the 12-lap feature event to capture the Little Lincoln feature event. Lawson, who predictably races the top of the racing surface, dove to the bottom of turns three and four to defend the win over Tracy.

Jerry Barker had to fight off the hard challenges of Joey Waters to capture the Delmarva Chargers feature event. The two rubbed fenders, slide-jobbed, and drag raced for the entire 12-lap event. Barker stating in victory lane, “We are all friends, but that was maybe too hard of racing for my liking. We will talk it over in the pits and move on.”

David Smith and Jerry Hill fought for the top position for the duration of the Delaware Super Trucks feature event, with Smith taking the checkered after Hill did not meet weight requirements in post-race inspection.