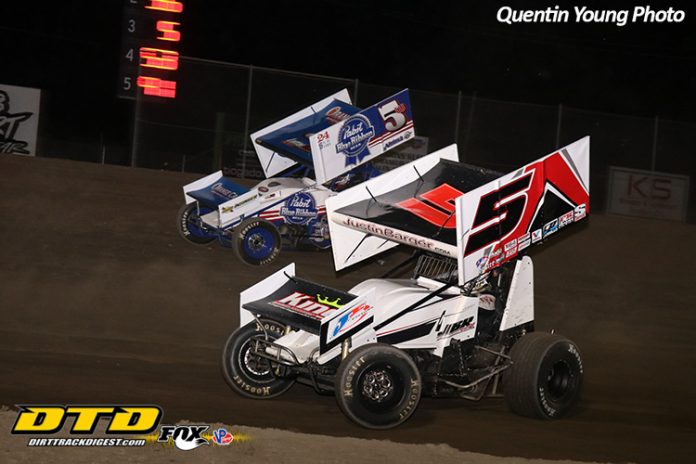 DUNDEE,NY – A partly sunny and warm day became a chilly fall evening as 176 cars signed into the pits for the first of two days of racing at Outlaw Speedway for the Dutch Hoag Weekend, the final event of the 2018 season at the Yates County oval.

The Lucas Oil Empire Super Sprint ‘A’ Main started with Shawn Donath holding the lead from the pole until Justin Barger battled him for the top spot.  Lucas Wolfe caught Barger in traffic and took the lead as Donath fell to fourth behind Jared Zimbardi with five laps to go.  At the checkers, Wolfe took the win over Barger, Zimbardi, Chuck Hebing, and Donath.

Lucas Oil ESS heats were won by Lucas Wolfe, Chuck Hebing, and Jared Zimbardi.  The Dash was taken by Shawn Donath and the B-Main was captured by Jeff Cook.

The Hoosier Tire Crate Sportsman feature only made it to lap 1 when Brent Ayers went for a wild flip on the backstretch in a multi car crash.  He was OK.  Will Shields got the lead after the race restarted and held it till a lap 13 yellow.  On the next restart, the second flip of the race happened when Garrett Rushlow got upside down on the frontstretch.  Shields and Stacy Jackson battled up front after the restart with Zach Sobotka in third.  Shields and Jackson continued to fight for the lead as Dave Marcuccilli was able to move into third on lap 24.  The trio diced for the lead to the checkers, with Jackson winning by a car length over Shields and Marcuccilli, followed by Karl Comfort and Sobotka.

In the 30-lap 4 Cylinder feature, Ron Darling battled Adam Austin for the lead till Steve Perkins brought out the yellow on lap 6.  Austin took the top spot on lap 8 and briefly lost it to Ray Hyer on a lap 15 restart, but got it back a couple of laps later.  Cole Suscie moved past Hyer for second on lap 18 but could not catch Austin, who took the win.  Hyer grabbed second from Suscie at the line with Darling and Scott Lehman rounding out the top five.

The Marion Decker Agency Hobby Stock feature began with a lead battle between Jamie Eldridge, Aaron Miller, and Jared Dennis fighting for the lead.  Eldridge was having front end issues and faded back to third as Miller had a flat right rear tire, which left Dennis and Shawn Lloyd to battle for the top spot.  Lloyd grabbed the lead as Marc Minutolo fought his way up to second, but Frank Brunell got by both of them and held Minutolo off for the win, followed by Greg Young, Shawn Lloyd, and Justin Eldridge.

The Street Stock field of 32 was split into a pair of 15-lap Dash events, with the winners earning the 3rd and 4th starting spots in Saturday’s Empire 100.  In the first Dash, Jared Hill came from mid-pack to beat Carl Cleveland and Nick Robinson to take the win.  The second Dash was dominated start to finish by Dylan Cecce, taking the win over Jake Karlnoski and Jon Carpenter.

The remainder of the Outlaw Speedway Dutch Hoag Weekend will feature the $7,000 to win ‘Gunslinger 70’ for the