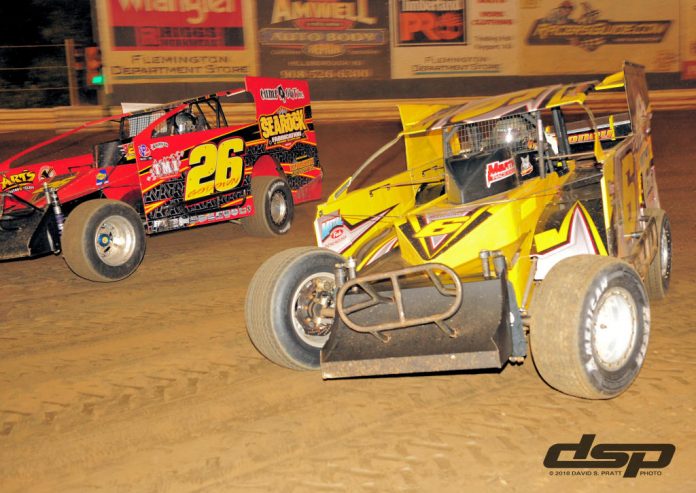 As the 60-lap Modified feature got underway, Jimmy Horton grabbed the lead with Cale Ross and Ryan Godown next in line. Following a caution on the first circuit, Godown zipped to the front of the pack on the restart with Horton dropping into second. Horton regained the top running spot on the third tour. After two additional appearances of the yellow flag, Horton was still in command on lap seven with Godown in his tracks. After a good multi-circuit duel, Godown returned to the front with nine revolutions completed. Horton, using the high side, recaptured the lead on lap ten. Horton and Godown continued to remain in close quarters over the next several tours with Ryan Krachun in third and Duane Howard in fourth. On lap fourteen, Godown slipped past Horton to take back first place. Godown was beginning to build a sizeable advantage when the caution lights illuminated on lap seventeen for a slowing Jack Swain. When action resumed, Godown maintained his edge with Horton, Krachun, Howard and David VanHorn completing the top five. By lap twenty with Godown beginning to pull away from his rivals, Horton was fending off Krachun’s advances for second place. On lap twenty-five, Krachun’s good run ended as he slowed on the track due to a mechanical issue. When green flag racing returned, Godown fended off Horton to maintain his lead with Howard in third, Mike Gular in fourth, and Billy Pauch Jr. in fifth. As Godown was stretching out his advantage, David VanHorn motored by Pauch Jr. to enter into the top five. On lap thirty-five, a flat tire on Chad Barney’s ride brought out the final yellow flag of the contest and the scheduled fuel stop took place as well. Following the short break in the action, the top three of Godown, Horton and Howard remained intact. Pauch Jr. broke back into the top five by motoring into fourth on lap thirty-seven with Gular shuffling back to fifth. During this good stretch of green flag racing, Godown was able to build a comfortable advantage. However with ten circuits to go and lap traffic looming ahead, Horton was cutting into Godown’s margin. On lap fifty-two, the top two were beginning to pass slower competitors with Howard and Pauch Jr. battling for third. With only five tours remaining, Godown’s advantage was still evaporating with Howard and Pauch Jr. running door-to-door. After clearing lap traffic on the final circuit, Godown crossed the finish line before his foes to take his first checkered flag of the season and his forty-sixth of his career. With Horton coming home in second, Howard completed the race in third. Fourth went to Pauch Jr. with Gular finishing in fifth. Duane Howard, Cale Ross and Mike Gular were victorious in the Modified heat races. The consolation contest was claimed by Mike Butler.

After taking the lead on the fifteenth circuit, Art Liedl paced the field for the remaining tours to grab his second victory of the season in the 25-lap Hammer Sportsman feature. JT Trstensky led the opening fourteen revolutions before the tenth place starting Liedl took control following a restart. Trstensky’s strong effort resulted in a second place finish. Jim Housworth was third. Will Dupree was fourth and Joseph Brown was fifth. The Hammer Sportsman heat races went to Art Liedl and Louden Reimert.

In the 25-lap feature for the Crate Modifieds, Johnny Bangs survived a restart with two tours remaining to claim his first career victory. As the contest began, Bob Lilick grabbed the top running spot. Jeremy Martino took over the lead on lap two. On the sixth circuit, the fourth place starting Bangs swept by Martino to take command of the race for the remaining distance. Martino finished in second with Eric Palmer coming home in third. Fourth went to John Aumick. Ryan Simmons came from his sixteenth starting spot to finish fifth. John Aumick and Jordon Cox won the Crate Modifieds qualifying races.