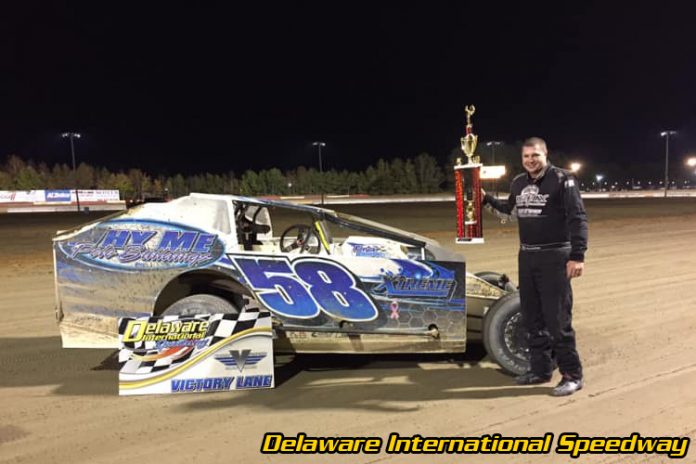 DELMAR, DE – Jordan Watson looked stout in the No. 58 Big Block Modified, taking the lead from H.J. Bunting on lap 31 and driving away to collect a nearly $7,500 payday. The 50-lap Delaware State Dirt Track Championship was Watson’s second of his career and topped off his championship season at Delaware International.

“Someone had to do something about these guys coming down here and beating us,” in reference to the recent successes of invaders from the Pennsylvania area beating the locals at specialty events in Delaware.

“Watt and Von Dohren are professionals. To come out here and race at their caliber and pass them to win is huge,” said an ecstatic Watson in victory lane.

From the drop of the green, Craig Von Dohren was on the move from his fifth place starting position, quickly taking the third position behind H.J. Bunting and Ryan Watt. Multiple caution flags in the first 10 laps would keep the field tightened up.

Bunting would continue to control the pace, as Watt, Von Dohren and Watson competed for the top three positions.

A lap 18 restart would put Watson in the top line for a “Delaware Start,” beside Von Dohren, as Bunting led. Watson would carry the momentum of the top groove in turns one and two, taking the second position from Von Dohren. Moments later, Von Dohren slowed with speculated battery issues.

The leaders began navigating heavy lapped traffic, as Watt was putting the pressure on Bunting for second.

On lap 40, an unfortunate turn of events happened for Watt, as he tangled with a lapped car while running third. With 10 laps remaining, Watt would come from the rear of the single-lap down cars to rejoin the top five in two laps.

Joseph Watson and Watt began putting the pressure on Bunting for second, when he succumbed to a flat left rear tire on lap 45.

“We were pretty good. I was trying to bide my time and not show them my hand too early. These guys are professionals and you cannot let them see your strength before you are ready to make your move,” said Watson.

Watt collected a pair of seconds throughout the weekend in the small and big block feature events. “We had a second-place car. Jordan (Watson) was really good. This was a good weekend for us and the track was great.”

Charlie Cathell experienced heavy rainfall early Saturday morning at the motorsports complex. The racing surface was heavier than the qualifying events but allowed for multiple grooves of racing on all areas of the track.

Joseph Watson, who salvaged a third-place finish, admitted in victory lane that he was ready for the race to be over, as he was “hanging on” with a poor handling racecar.

With less than 10 laps remaining, pole-sitter Adam White and second-place runner Joe Toth made contact in turns one and two, while competing for the lead in the 25-lap AC Delco Crate Modified feature event. Both were able to keep their cars rolling, with Toth taking over the top position. A green, white, checker restart would regroup the field, but would be no competition for 17-year-old Toth, as he collected the victory with White, Matt Smith, Eric Kormann, and David Jenkins rounding out the top five.

“I feel awful for passing the No. 15 like that,” said an apologetic Toth in victory lane. Toth has had a standout season being highly competitive at a variety of tracks in the area.

James Hill continued his dominating season, collecting another victory and the championship in the Modified Lite division.