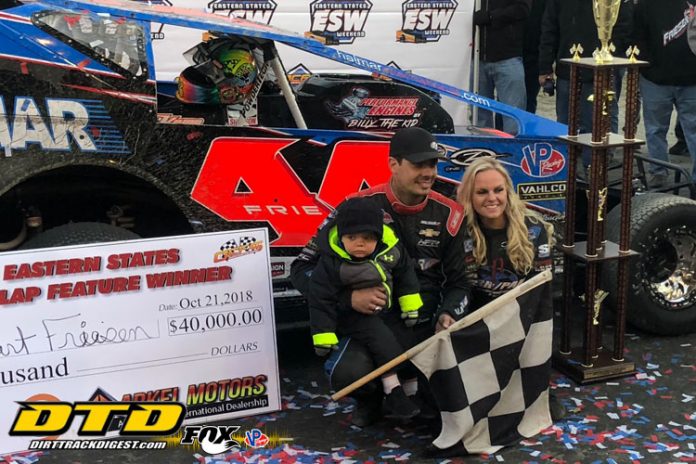 With the year in racing coming to a close we have had some great season ending racing to close out the season. Chris Larsen of Halmar International and his people have done things many of us have talked about for years. What once was a one day, 100-lap event is now a three day event starting on Friday. And on Thursday before the Eastern States Weekend started, Brett Deyo and BD Motorsports held it’s Hard Clay Finale which crown the STSS Halmar International Northern Region Champion, Billy Decker. Decker received $12,500 as Champion. Winner of the STSS 100-lap event was Mike Gular taking home $10,000 after only his second appearance on the Hard Clay. Big money continued to be part of the weekend, on Friday the Sportsman raced 50 laps for $5000 to win, Saturday $15,000 went to the winner of the Small Block 100-lap event and then on Sunday the Eastern States 200 winner picked up $40,000 for the win.

Friday we were treated to a full day of racing with Modified time trials and qualifying heats for Sunday’s Eastern States 200, followed by the 50-lap Sportsman event and the past champions 20-lap event for winners of past 200’s. There were 13 drivers that took to the oval while three other past winners were there as spectators, C. D. Coville, Kenny Brightbill and Gary Balough. For the veteran fan there was plenty to see and many former drivers to talk with. Everyone had time for autographs and photos, adding a very special element to the weekend. And in many cases on Eastern States Weekend you get to see people that you may see only once a year. One driver got a huge surprise. L. J. Lombardo was surprised by his girlfriend, Mikey Albreada who flew 4500 miles from Italy to see him race in both Saturday and Sunday’s events. Lombardo ran second and third through most of the event on Saturday and finished in third behind Brett Hearn who was given the win when Stewart Friesen came up light at the scale, this moved L. J. to second and there was much celebration in the Lombardo pit. However, Sunday’s event was not as good for Lombardo who was involved in a crash during the B-Main, ending his day and a chance to race in the 200.

Saturday’s event ended in a strange coincidence as winner Stewart Friesen was declared light at the scale giving Brett Hearn the win. In last year’s small-block event Hearn was light at the scale giving the win to Friesen. Each time the infraction ended with each driver losing a chance at the bonus money for winning both Saturday and Sunday’s event.

On Sunday it was cold but we knew it would heat up as the day went along. As the drivers lined up in their pit stalls we noticed an impressive sight that we may have never seen before; parked next to each other with similar paint schemes were the husband and wife team cars of Stewart and Jessica Friesen. Stewart started the event in 19th position and Jessica started 23rd. Stewart won and Jessica finished in 12th, probably something for the Eastern States records books. Prior to the running of the Eastern States 100 on Saturday it was announced that the Central Bridge Fire and Rescue Team were at the race as guest of the speedway, seated in the brand new VIP section in turn one. The team was brought to the Eastern States Weekend event by Dirt Track Digest contributor, Jeff Withey. In our area first responders are volunteers dedicated to their communities and to helping people in all kinds of emergency situations. They are always ready to respond to any emergency at anytime. As volunteers no one every expected that they would have to face such a horrific tragedy as the limo crash that killed 20 people two weeks ago and no matter how strong they are it will be a long time before things return to normal for the outstanding volunteers on the scene that day. We all need to remember to thank all first responders in our own way whether by donations or just a thank you. Throughout Eastern States Weekend donations were collected for driver, Dan Dulin who was severely injured at work. Race fans stopped at the race car to make donations and sign the car. We snapped this photo of Gary Balough making a donation and signing the car. It was also announced by Promoter, Mike Gurda, that the track’s half, $7,000, of the 50/50 for the weekend would be donated to Dulin. What a great gesture. We send our prayers to the Dan Dulin family.

The 57th Eastern States 200 Weekend certainly didn’t disappoint the race fans. With all the improvements at the 99-year-old speed plant it was worth the trip just to take in what is being done to the Hard Clay oval facility.