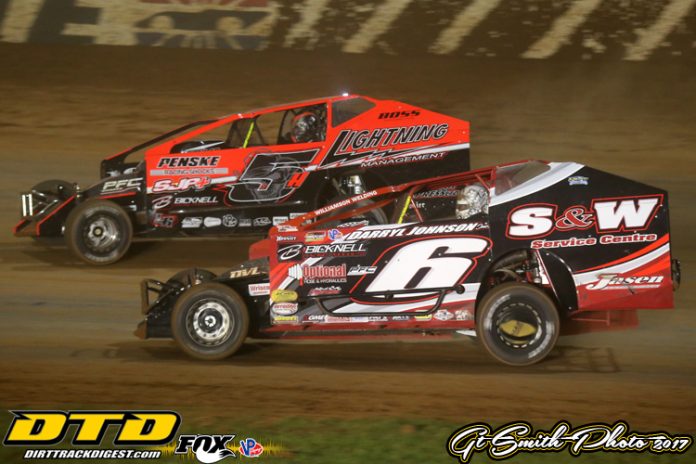 CONCORD, NC – It all comes down to this. After 26 feature races, only 40 points separate Championship points leader Matt Sheppard from second-place Erick Rudolph. The World of Outlaws World Finals presented by Can-Am sets the stage at The Dirt Track at Charlotte for two Championship-deciding Feature events. No stages, no playoffs, no gimmicks, just two drivers battling for every position and every point down to the last race.

Who will be crowned Champion of the premier Big-Block Modified tour in the country? Sheppard leads the Super DIRTcar Series in wins with four, while Rudolph has been consistent all year long. Rudolph closed the gap at Brockville Ontario Speedway with the Feature win, a Heat Race win, and the Billy Whittaker Cars Fast-Time Award, while Sheppard stayed in the top ten throughout the night to finish sixth.

Last year Mat Williamson shocked the capacity crowd with a win on night one. Williamson is coming off one of his biggest wins of his career, in which he picked up a $10,000 payday at Brockville in his DIRTcar 358 Modified, so he will be bringing a lot of momentum into Charlotte. On night two, Matt Sheppard capped off his 2017 Championship with his twelfth Series win of the year. With a second place and a win at Charlotte last year, Sheppard will be difficult to top in 2018.

Danny Johnson, Jimmy Phelps, and Max McLaughlin are in a tight battle for the final tier of the podium. Meanwhile Peter Britten and Brett Hearn are locked in a duel for sixth.

The Big-Block Modifieds will run Time-Trials and Heat Races on Thursday, November 1 to set the Feature fields for Friday and Saturday. They will of course be joined by the World of Outlaws Craftsman Sprint Cars and the World of Outlaws Craftsman Late Models. Friday night features an unparalleled sight in motorsports: All three divisions will take to the track for a special four-wide presentation to the fans.

The next Super DIRTcar Series Big-Block Modified race will be at Volusia Speedway Park February 12-16 2019 during the second half of the DIRTcar Nationals.

TICKETS: To purchase tickets and pit passes to the World of Outlaws World Finals presented by Can-Am, fans can call 1-800-455-FANS (3267) or shop online.