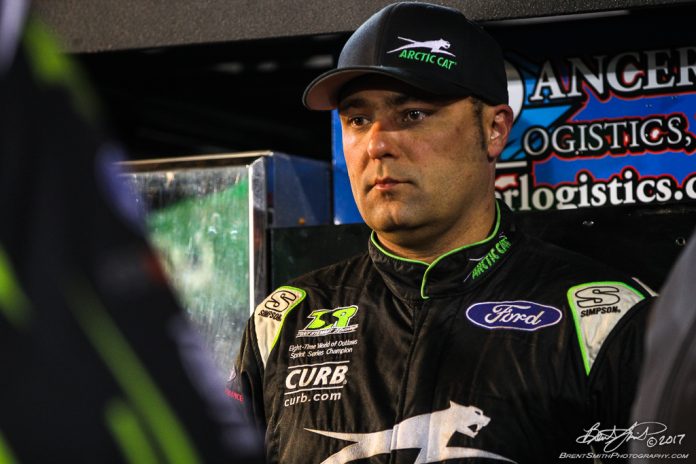 Sweet led the opening circuit before a nasty crash involving Port Royal’s Track Champion Logan Wagner and Tim Shaffer, halted action with one complete. Both drivers were uninjured in the accident but done for the afternoon.

Sweet was strong on the restart and didn’t reach traffic before Logan Schuchart’s night came to an end on Lap 6, stopping on the front stretch.

Lucas Wolfe remained in second on the ensuing restart, looking for a way around the 2018 Knoxville Nationals Champion. Donny Schatz worked his way forward to third from his fifth starting position and remained within striking distance of Sweet and Wolfe.

Consecutive cautions on Lap 16 and 17 allowed Wolfe to set up an attack for the lead on the restart. As Sweet brought the field back to Green on the 18th circuit, Wolfe blasted to the top side of the racing surface and took control of the field down the backstretch to a large roar from the Port Royal faithful, only to have the pass negated by a caution for a stopped Ian Madsen.

The following restart Sweet was prepared and fended off Wolfe’s charge before the caution flew on Lap 21 for the designated fuel stop.

When action resumed, Donny Schatz moved into second and began closing in on Sweet for the lead. Schatz found grip on the bottom and got underneath Sweet to lead the 32nd lap before the caution flew for fourth-place running Gio Scelzi.

Schatz ran away on the restart as Wolfe began going to work on the cushion, closing in on Sweet, eventually reclaiming the second position on Lap 38. At this point, 16th-starting Freddie Rahmer had climbed to fourth with 23rd-starting Daryn Pittman coming forward to sixth.

A caution with eight laps remaining bunched the field together and gave Wolfe a chance to steal the victory from Schatz.

Schatz powered away on the restart, completing a lap before the Yellow Flag flew for debris, as the hood flew off seventh-place running TJ Stutts’ car, ending his evening.

Schatz again blasted away on the restart, leaving no doubt who the class of the field was, en route to his 21st World of Outlaws Craftsman Sprint Car Series Feature of 2018.

“That felt like a 500-miler,” Schatz said with a chuckle in Victory Lane about the caution-filled race, next to his Tony Stewart/Curb-Agajanian Racing No.15. As always, Schatz deflected the credit of the victory his crew, “These guys are incredible at what they do, it’s pretty cool to win that big money. Anytime you win in Pennsylvania it’s big and this is a big one.”

“We decided we better start testing out the 2019 rule changes and since we’ve done that, we haven’t finished worse than second and that’s really important,” Schatz, who was sporting a special Arctic Cat paint scheme, added before expressing his gratitude to Port Royal Speedway for not giving in to Mother Nature this weekend.

“My car was really good, I could really move around. They did a great job with the track,” Rahmer, who scored his first career World of Outlaws victory earlier this year in July, said in appreciation of Port Royal.

Daryn Pittman, who charged from 23rd to complete the podium, echoed the sentiments about Port Royal Speedway, “Hats off to Port Royal, they could’ve easily thrown in the towel for this weekend. They did a really nice job widening out the track. It’s always a pleasure to come back to this place and see the improvements they do on a weekly basis.”

“To start 23rd and end up on the podium says a lot about how great my race car was and the track. I wish we would have been a little stronger earlier in the night to get a better starting position,” Pittman, who earned KSE Hard Charger honors added.

Persistent rain and cold temperatures led to the cancellation of Friday and Saturday’s program, forcing the World of Outlaws and Port Royal to use the Sunday rain date. The program was moved forward in the afternoon; a good decision by all parties, as heavy rain began to fall less than an hour after the Feature concluded.

Brian Brown bested the 51-car field in Qualifying and broke the Track Record in Qualifying with a lap of 14.868. In total, seven drivers in Qualifying went under the existing record and for the first time in track history a sub-15-second lap was run.

With the unique format, the Tuscarora 50 was show-up points only for the World of Outlaws Craftsman Sprint Car Series teams.

The World of Outlaws Craftsman Sprint Car Series finishes off its 40th Anniversary Season with the World Finals presented by Can-Am at The Dirt Track at Charlotte next Thursday, Friday, Saturday, November 1st-3rd. Tickets still remain for one of dirt track racing’s biggest spectacles as the World of Outlaws Craftsman Sprint Cars and Late Models and Super DIRTcar Series Big Block-Modifieds crown their champions.