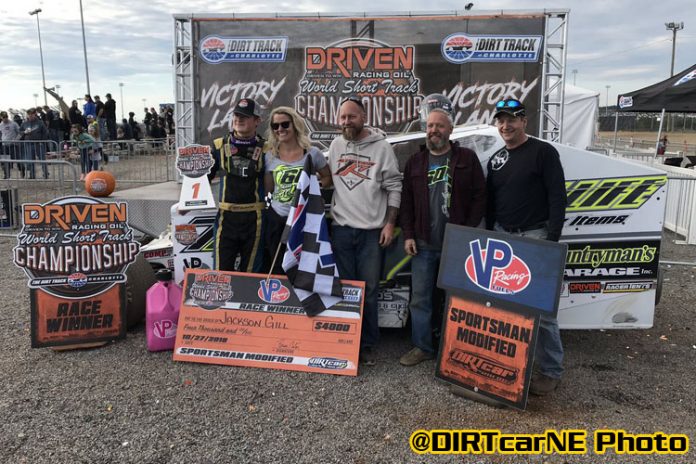 CONCORD, NC – Two Northeast divisions were featured at the World Short Track Championship at The Dirt Track at Charlotte, with the DIRTcar Pro Stocks and DIRTcar Sportsman contesting a pair of 30-lap mains. When the dust settled, Nick Stone and Jackson Gill claimed victories at the premier North Carolina venue.

Joceyln Roy took command at the start of the 30-lap Pro Stock Championship, with Luke Horning following close behind. Initially, Roy and Horning opened up a small lead over the field, but Rock Aubin and company closed that gap as fast as it opened. The yellow flew for the first time on lap 10, allowing the pack to catch up to Roy.

On the restart, Horning held tough up high and nosed out into the lead. For the next number of laps, the top five ran under a blanket, with Roy drawing even for the lead at halfway with Aubin, Chuck Dumblewski, Nick Stone, and Sean Corr ready to pounce. Some contact allowed Horning to break free, but Horning’s run came to an end with mechanical issues on lap 18.

The caution waived the next lap, but not before Dumblewski took the lead from Roy. Another quick few cautions allowed Stone to get by Roy for second, and when the race got back to consistently green, Stone went to work on Dumblewski. On lap 22, Stone dove under Dumblewski to snatch the lead, but Stone couldn’t pull away. While Dumblewski held close, he didn’t have enough to get back to the front, as Nick Stone claimed the first ever Pro Stock win at Charlotte by half a second over Dumblewski, Roy, Aubin, and Kenny Gates.

David Schilling grabbed the early lead in the 30-lap Sportsman main, distancing himself from Jackson Gill early on. By lap 10, Schilling reached traffic, and Gill chopped the lead fast. What was a two second lead was shrunk to half a second, but Schilling began making good moves in traffic that Gill could not match. Just as Schilling put a couple cars between himself, Gill, and Kevin Root, the yellow flew on lap 14 for a slowing Rocco Leone.


On the restart, Root stole second from Gill, but Gill pulled a crossover and regained the spot. A couple more cautions kept the field at a stop-and-go pace, but when racing resumed on lap 15, Gill went on the attack. Darting to the bottom of turn three, Gill took the lead at halfway, then Tyler Thompson got by Schilling for second the next time by. Schilling’s descent continued, as Root got by for third just after that. The yellow waived again on lap 18, with Gill now setting the pace.

With ten to go, Thompson slipped up and slid back to fourth, as Root and Jessica Power drove by. Don’t look now, Dave Marcuccilli had clawed into the top five, reaching fourth on lap 23. Up front, Gill was slowly putting space in between himself and Root, with Marcuccilli working over the back bumper of Power for a podium spot. While Root tried to hunt down the 15-year-old Gill, it wasn’t enough as Jackson Gill scored the Sportsman feature win at Charlotte. Root chased in second, while Power held on for third. Marcuccilli crossed in fourth, while Alan Fink finished a quiet fifth.