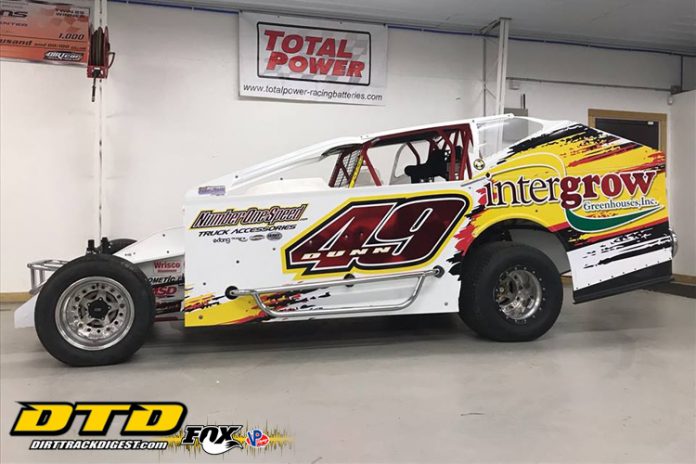 Billy Dunn, 2018 track champion at both the Can-Am Speedway and Utica-Rome Speedway, has reached a deal to forge a relationship with car owner Bill Cook of Intergrow Greenhouses for next season. This new deal replaces the departed RLM Motorsports as well as his deal with the Slack family. The team will have the No. 49 displayed on the door panels of their Bicknells.

“First off I can’t thank the Slacks enough for everything they have done for me,” commented Dunn. “Randy really stepped up and believed in me a couple years ago when I wasn’t really sure if I was going to be doing any more racing than one night a week at Can-Am. The original deal was to run some specials in the 358 and big-blocks which turned into a full-time ride. That led to my first big-block win in a few years as well as a Utica-Rome Speedway title. Without Randy and Bob Slack I would definitely not be in the situation I am now with Bill Cook and Intergrow.”

This will be the first time since 2011 that Dunn will be driving for a single team. They plan to compete with the big and small-block Modifieds while running a schedule similar to what Dunn raced in 2018 including Can-Am, Land of Legends Raceway and most likely a title defense at Utica-Rome.

“This gave me my first opportunity in a long time to drive for one owner so I took it,” cited Dunn. “We are going to own the cars together and we are going to do the same deal. Bill was looking to do something different and we were able to get together. I’m really excited for this new opportunity.”

It’s an off-season full of change for Dunn and the team as he’ll also be marrying girlfriend Moriah Woodburn in a little more than three weeks.

“This has been a great off-season,” mentioned Dunn. “In a few weeks I’ll be getting married and I’m super excited about that. I already have my plans for next season so I don’t have to worry about the stress of that. Things are really going well.”

Cook has been involved in racing for several years as he’s a former crew-chief in the NASCAR Busch North Series. He continued his motorsports involvement after that with teams in North Carolina before shifting his focus more recently to local racing.

Cook was behind Larry Welling’s 2018 season as well giving support to Central New York Sportsman regulars Jessica Power and Robert Gage. This season he’s decided to go all in with Dunn while continuing his relationship with the other local teams.

“We just decided at the end of the season to go in a different direction,” stated Cook. “I’m super excited for this new deal. It’s going to be a big change having someone with his experience driving the car. He’s had a lot of success in his career and we are just hoping to continue that while he helps us get our feet wet in the big-block deal. I’m really excited about that.”

Support for the new team will come from Intergrow Greenhouses, Number One Speed, Integra Shocks and Bicknell Racing Products.

The team is backed by several solid sponsors, but will continue to look for more support as they have plenty of sponsorships deals still available. Anyone interested should contact Dunn or Cook for information.

The team is ready to display the new colors this coming Saturday at the Watertown Wolves hockey game. Tentatively the No. 49 will make its on-track debut as part of the DIRTcar Nationals at the Volusia Speedway Park in February 2019.