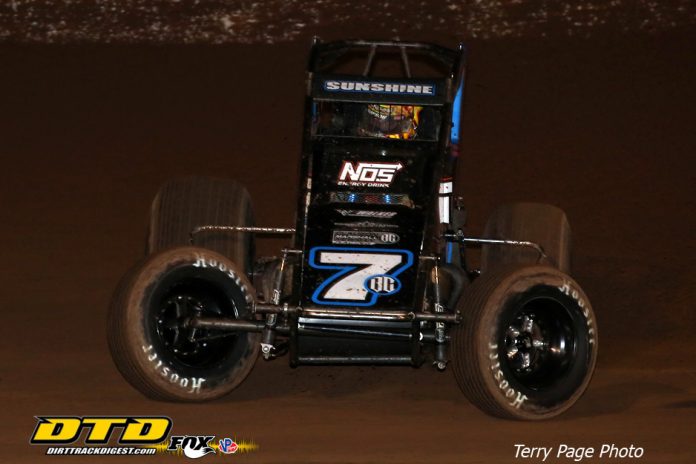 SAN TAN VALLEY, AZ – Twenty-four hours prior to taking the green flag for Saturday night’s 51st “Western World Championships” finale at Arizona Speedway, Tyler Courtney was lamenting how he threw away a victory in lapped traffic.

It was a mistake the Indianapolis, Indiana driver expressed he couldn’t repeat when racing against competition that is at the top of their game.

Twenty-four hours later, Courtney was standing in victory lane, reversing the spell that cast him in the throes of lapped traffic. This time, it was he who capitalized in lapped traffic as he ran down Dave Darland with 13 laps remaining to win his 11th USAC AMSOIL National Sprint Car feature of the season.

“I screwed myself with lapped cars last night and I was determined that I wasn’t going to do that again,” an adamant Courtney said.

Courtney started fifth on the field while, up front, fellow USAC National Sprint Car championship contender Chris Windom rocketed from his outside front row starting position to the lead past pole sitter Damion Gardner and quickly carved out a two-plus second advantage.

On the move and not wasting a single heartbeat was Courtney who advanced three spots to second on the opening lap, slithering around the outside of Dave Darland on the top of turn two to gain the position. Darland fought back to regain second on the fourth lap just before the night’s first yellow flag fell for the stopped car of 2014 “Western World” winner Matt Rossi on lap five.

On the restart, Darland reared back and fired a slider into turn one. As Windom came off the top to launch his way off turn two, the duo nearly went hammer to nail. Windom got on the binders, which shuffled him out of the deck and back to fourth as Courtney and Leary shot past for second and third, respectively, while Darland carried onward with the race lead.

However, the lap six restart following top CRA Rookie Joel Rayborne’s incident in turn four saw Leary wrestle the second position away from Courtney where he would remain until the ninth lap when Courtney eked between Leary and the turn two concrete to nab the runner-up position for the time being, with leader Darland now within earshot.

Whereas Courtney gave into impatience and trigger happiness on Friday night, Saturday night would prove to have a different outlook as he stuck to his guns up top. On lap 18, Courtney’s stick-to-itiveness paid off as the two began to work their way into traffic. Darland went to the bottom of three and four to work by Rossi and R.J. Johnson, still maintaining the lead to the stripe.

Entering turn one, Darland drove it in the corner as straight as an arrow and slid to the top, cutting in front of Courtney’s line up on the lip. Courtney countered underneath Darland and two raced wheel-to-wheel down the back straight of the 3/8-mile dirt oval with Darland clinging to a slight advantage into three. Courtney threw his Clauson Marshall Newman Racing/NOS Energy Drink – Priority Aviation/Spike/Rider Chevy deep into turn three, shoulder-to-shoulder with Darland.

Darland appeared, momentarily, to have the momentum to ride back by Courtney on the outside, but, instead, snagged the right rear in the cushion just enough to lift the front wheel just a smidge. The two remained wheel-to-wheel all the way through the corner with Darland getting just a tad squirrely on exit, somehow avoiding contact with the distance between the two being roughly the circumference of a feline whisker, as Courtney raced to the lead at the line by two car lengths.