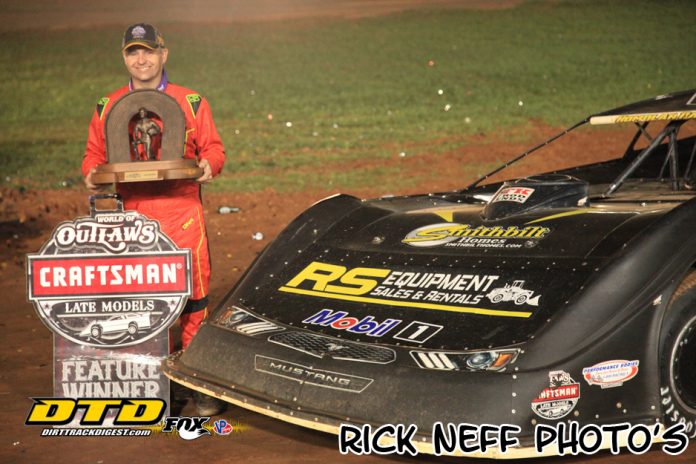 During this past weekend at the World Finals presented by Can-Am at The Dirt Track at Charlotte, Marlar finished third and sixth to complete his quest for the crown.

Marlar isn’t your typical champion as he hasn’t spent years on the WoO Tour in quest of the championship.

He said,”My car owner Ronnie (Delk) and I decided that this is the going to be our last year racing together. We were both going to come off the road and it would let himself focus on his business and myself too. That was the kind of plan at the end of last year.”

Continuing he said, “We felt like we did good enough to come out and try this for one year. It is unbelievable to go out like this in such a cool deal. So I’m glad we could give it to him.”

Marlar explained, “You know I am highly competitive and I really wanted to give it my all to see if I could win. That’s what it came down to and everything worked out.”

In a season where he picked up five wins, 29 top fives and 36 top tens he outdistanced defending champion Brandon Sheppard by just 28 points.

When asked how difficult the quest for the crown was, the low key, soft spoken Winfield, Tenn., driver said, “My team has experience in traveling quite a bit. That’s basically what we’ve always done.  We’ve just never run a series. We were just kind of outlaw style schedule.”

Continuing he explained, “We’re use to traveling to 60 or 70 shows a year so basically nothing changed, but it was just that it was designated where we were going to race. Actually it was easier as we had a plan to follow where usually we just followed our gut.  So this year that part of it was nice and really and honestly it came pretty easy. It wasn’t any harder than any other season and I was just fortunate all year. Next year the wheels could fall off the thing, but this year it really worked out easy all the way through.”

For the most part the season started on a high note, then improved when he purchased some new equipment.

“We started off pretty good in the spring and then when we went to some tracks close to home I thought we would run well, but we didn’t run bad only finished in sixth or seventh place in an old car. We then went out and built anew car,” said Marlar. ”Immediately we won some races and started running good from there on. We just tried to conserve our equipment that we ran on the Outlaw tour and made sure that we had new stuff on it when we ran it.”

What does it feel like to be up there with past champions like Brandon Sheppard, Josh Richards and others?

Marlar said, ”Man, it’s just a dream come true. It is such an honor. I always said when I started racing when I was a kid I just wanted to know if I could do it.  My dad helped me with a street stock and I won the first race I ever drove.  Right there on the first day my expectations were met and from there on out everything is just going to be a cherry on top. Now I think maybe we’ll make it into the Hall of Fame and it is just an absolute awesome feeling.”

Ronnie Delk, owner of Delk Equipment Sales, is from Jamestown,  Tenn., and the combination with Marlar really paid off.

Mike said, ”I have to thank Ronnie. Smithbilt Homes came along this year and helped me get out on the road. If it hadn’t been for them giving me a little kick in the butt to get out there this wouldn’t have happened. I also have to thank Rocket chassis, Cornett Engines, Sunoco, Mark Martin Timber and Farms, BruceBuilt Performance and R.S Equipment Sales.”

The season ending points saw Marlar 28 points ahead of Sheppard and 76 in front of third place Chris Madden.

In closing the 2018 WoO Late Model champ thanked his competitors as he explained, “It was a tight battle all year. My competitors Brandon and Chris brought me to a higher level than I knew I could be at.  I appreciate those guys for doing that.”