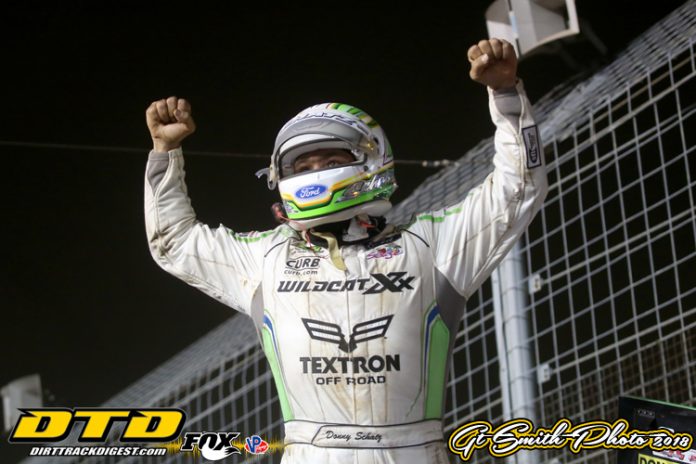 Donny Schatz is now a 10-time champion told Dirt Track Digest, “Ten sounds, well, that pretty cool, but you never dream that big. However, when you have heroes like Steve Kinser whose won this 20 times you don’t feel like with 10 that you’ve even scratched the surface. Thank God for what he did all those year to set the bar so high. I feel like I am somewhat accomplished to be able to be in the likeness of him. I’ve been around for 20 plus years so that is a long time and it is pretty rewarding to think that half of that time are championships. I am pretty proud of that.”

The North Dakota driver has 283 wins in his career and he trails only the legendary Steve Kinser (690) and Sam Swindell (394).

In discussing the run to his 10t title, the 10-time Knoxville Nationals champ said, “There is never an easy championship. You can’t put it back on any one night or any one this that propelled us ahead, but the way this team attacks every night, the way they are consistent, the way they handle some nights when things don’t go good it is just what they have built on over the years and it really feels good to be in that position because they seem like they pull out of anything. I am pretty proud of that.”

In bringing the Outlaw title to the Tony Stewart Racing stable and talking about the impact owner Tony Stewart has on him Schatz said, “Tony obviously built a platform for this and he’s always had a great platform. But to be a part of it when he hired me in ’07 to come in and used the race cars and the motor I used we still have all those components with us today. It is just incredible. He lets us do what we need to do to win races and we don’t ask for permission we ask for forgiveness sometimes.  It is just the way it goes.”

Continuing he said, “He is a true racer, doesn’t step on toes, is a very good motivator and fun to be around like tonight. He gets concerned when you not kicking ass like you wanna be. He knows that when the time comes and push comes to shove we know what we have to do.”

A year ago Schatz had a frustrating final feature as it appeared he had his second consecutive victory of the weekend when David Gravel got past. However, he didn’t let that impact him.

On Saturday he went out and won in the final feature of the season.

He said, “Last season the ending was great as we won on the first night and ran second. It just slipped away at the end, but that didn’t happen this weekend. Last night (Friday) we did a little playing around and tried a lot of little things in the feature. We started 21st and finished 10th. We were happy with that. At the end of the race we were pretty solid. In the first part we were terrible. We found out why and the car was great after that.”

Continuing he explained, ”Tonight we didn’t have that problem as we started 10th and got ourselves the win. It’s great to end the season that way. It doesn’t really have any bearing on what happens next year. The race with Logan (Schuchart) was pretty good tonight. He got by us with a couple of laps to go. He got me to change the way I was doing things a little bit and I was able to pick up the pace.”

In talking about the aspects of pressure the champion said, “There is not any pressure. This isn’t anything people have to do, but you choose to do it. We’re really blessed to have a great sport like this, to be able to race for the money we do and have fans pack a place like this tonight. This place was packed. It makes it full circle and a lot of fun.”

Admittedly, Donny Schatz and his team are having a lot of fun, but its certain those chasing him or being passed by him in the huge money races and the championships chases aren’t  having nearly as much fun.