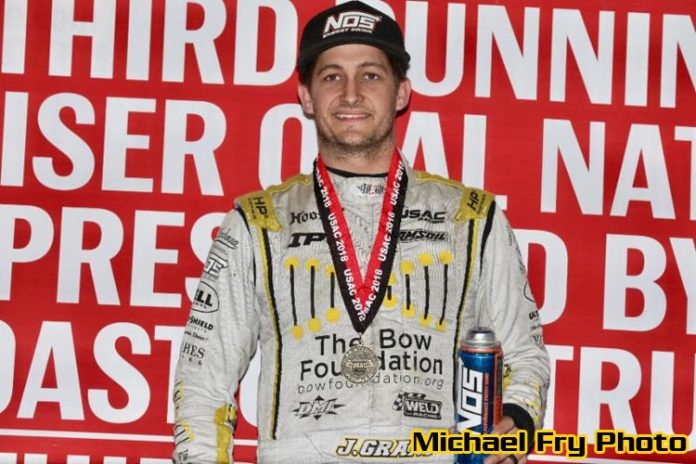 PERRIS, CA – When it comes to the first two nights of the 23rd annual Budweiser “Oval Nationals” presented by All Coast Construction at Perris Auto Speedway, it seems you just can’t keep Justin Grant and Tyler Courtney away from each other in late-race situations.

It also appears that down the stretch of the season, you just can’t keep Justin Grant out of USAC AMSOIL National Sprint Car victory lane as he collected his fifth win in the past seven races.

Lightning does in fact strike the same spot twice when it comes to the final two laps of the first two nights of the “Ovals.” Just like he did in Thursday’s opener, Justin Grant chased down Tyler Courtney in traffic coming to the white flag with the two making contact while battling for the lead in turn three.

For the second-straight night, Grant got the upper hand in the end with Courtney settling for a runner-up finish despite a dominant performance up to that point.

It led to a subdued victory lane celebration in which Grant chided himself for how it all went down in the end as he was gunning for race wins while Courtney was in the midst of a seriously tight points race on the final weekend of the season.

“I’m pretty disappointed in myself,” Grant admitted. “That’s not how I wanted to win that thing. I got tight against the cushion going into three right when he was getting sideways – my mistake. I’m really glad he didn’t get turned around and lose many points. The last thing I wanted to do was mess that up. That’s not how I wanted to win that race. My guys deserve it, but I feel really bad about it. It’s hard racing in traffic like that. There’s not a lot of options, but I certainly didn’t want to do that.”

Grant set fast qualifying time earlier in the evening while Courtney and fellow title contender Kevin Thomas, Jr. occupied the front row for the 30-lap feature. Courtney slotted himself into the lead ahead of Thomas on the opening lap when a melee ensued involving five cars: Brady Bacon, Dave Darland, Richard Vander Weerd, Brody Roa and Isaac Chapple, who tipped upside down. Chapple climbed out of the wreckage unscathed, but was finished for the night as was Roa, who saw his opportunity at a first USAC/CRA crown take a major blow.

Once action resumed, Courtney checked out, lifting the front wheels to the heavens as he ripped down the back straightaway. Meanwhile, Grant was already on the assault, jetting from fifth to fourth to third on laps two, three and four to settle in behind Chase Stockon and leader Courtney in the early going.

By lap nine, Grant and Stockon were exchanging recipes for sliders at both ends of the racetrack, ultimately securing the second spot on the 11th lap. However, Courtney used that opportunity to construct a six second lead as the race neared the midway point.

Simultaneously, Courtney began his approach of lapped traffic, setting a torrid pace as he avoided close calls with a pair of past USAC champs, first with bumper-to-bumper contact of Danny Faria, Jr. between turns three and four and near wheel-banger with R.J. Johnson at the flag stand. Grant munched more than a third out of Courtney’s lead in the process.

Courtney had no intention of being timid as he charged through traffic, slicing high and low between the tail end of the field. But, so was Grant. With ten to go, Grant on the scene trying his hand at a pair of sliders in turn three on laps 21 and 22 that he very nearly pulled off.

At some points, it appeared to be over, especially after smacking the concrete between turns three and four with six laps remaining that cost him valuable ground as the clock, and the laps, ticked away. But sand still remained in the hourglass for Grant as Courtney met a three-wide group of Josh Hodges, Max Adams and Damion Gardner involved in their own race for 13th, allowing Grant to reel Courtney in for one more run.

As the two raced to the white flag, Grant followed Courtney down the back straight with less than two car lengths separating the pair. Courtney entered high in turn three around the outside of Hodges. Grant followed suit with a big run on the cushion when Grant’s front bumper and Courtney’s rear bumper collided, resulting in Courtney performing a 90-degree angle turnabout while Grant escaped by the skin of his teeth between Courtney and the outside wall. Courtney miraculously gathered it up and carried on his merry way, albeit in second, with a championship-salvaging save considering the implications that would’ve transpired had he stalled it.

Grant finished off the final lap unchallenged, winning his fourth-straight feature event at Perris in as many starts this year. Courtney took second ahead of Kevin Thomas, Jr., Chris Windom and Stockon.

With the victory, Grant set a new, personal season-high of USAC AMSOIL National Sprint Car victories with five, moving him into a three-way tie for 42nd on the all-time series win list alongside Don Branson and Steve Chassey at 13 wins.

Courtney’s second-place run did allow him to open up his National point lead over Thomas from seven to nine heading into Saturday’s season finale. Meanwhile, in the CRA title race, Gardner and Roa had less than desirable finishes of 16th and 25th respectively. Gardner extended his lead to 33 as he aims to lock down his sixth-straight series crown and seventh overall.