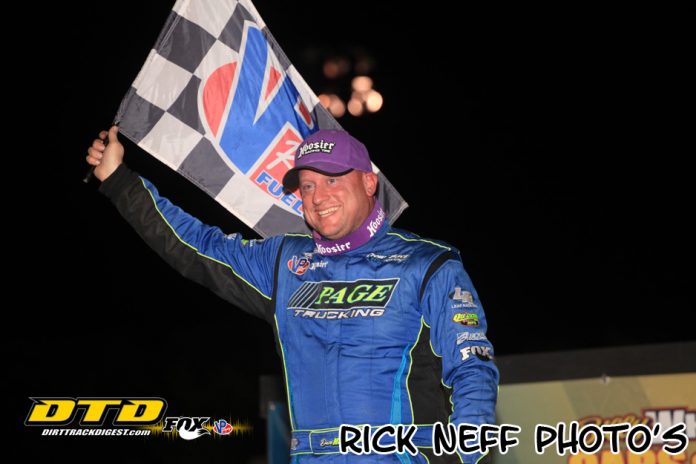 The last few years Dave Marcuccilli has solidified himself as one of the greatest Sportsman drivers in the history of the sport. Marcuccilli has won numerous track titles, multiple Super DIRT Week main-events and just about every other big Sportsman race on the schedule.  He’s got nothing left to prove in the division.

For 2019, it’s time for a new challenge.  By virtue of sponsorship support from All-Star Contractors, Marcuccilli is making the move next season into the 358-Modified ranks. He’ll be giving up the dominance for an all new challenge against some of the best in Modified racing.

“I’m looking forward to the challenge,” said Marcuccilli. “We spent 10 years in the in the Sportsman class. I feel like we earned a shot to do something like this. The people that have the money that want to do this stuff are very, very hard to find. Everybody knows that now. There just isn’t as many people with money that are willing to spend a lot of it in racing. We have somebody that is willing to help us out so we had to do it.”

Marcuccilli is experiencing a wide range of feelings after the reality of the move begins to sink in. He’s had so much success in the past. He’s also seen a few other Sportsman divers move up and have success as well. He’s hoping that things will go as well for him with the advancement in divisions.

“I’m excited, curious and hopeful that we can be competitive and run good,” stated the Montezuma, N.Y. native. “I like to think that we can, but you don’t know until you do it. I’ve seen some of the guys that moved up are having some success like Ronnie (Davis III) and Todd (Root). That makes me feel good about being competitive. I think as long as we get a good setup in the car that I can drive, we should be able to run decent.”

It’s not Marcuccilli’s first foray into the Modified ranks as he did have a chance to pilot Mike Payne’s big-block ride back in 2013 at Canandaigua. He also was able to hop into that same ride at Oswego Speedway this year during Super DIRT Week for some hot laps with the big-blocks on Saturday night after Billy Decker headed south to the Short Track Super Series event at Thunder Mountain Speedway.

Marcuccilli doesn’t feel like that prior experience will help based on how much the sport has changed in recent years with the variations in suspensions systems and setups that are now being run. The laps at Oswego were beneficial in that they did give him some confidence to make the move.

“That experience was so long ago and a lot has changed since then,” mentioned Marcuccilli. “I don’t think that will matter much once we get going. I did get to take Decker’s car out at Oswego, just for some hot laps. For never sitting in the car and going out there, I know it was hot laps and it wasn’t racing with anybody, but we put up a respectable time with a group of people that have been doing it a long time. That made me feel good.”

The move to 358’s means he’ll no longer call Land of Legends Raceway home on Saturday nights. He doesn’t feel like the small-block will be competitive so a change is necessary. Marcuccilli and company will tow their new Bicknell car weekly to Fulton Speedway on Saturday nights in 2019 with a few stops at Utica-Rome Speedway thrown in as well.

“We’ve had a ton of success, won a lot of races there and were fortunate to win multiple Sportsman championships,” commented Marcuccilli about Land of Legends Raceway. “I feel like we accomplished a lot there. I enjoyed the place and we got around there well, but I’m also looking forward to something different.

“I’ve veen racing there since 2012 full-time. It’s been a while. I only have one full season at Fulton in the Street Stock days. I always enjoy going to Fulton. It will be a different challenge. It’s a way different race track and obviously racing with some different people and some I use to race against. I’m looking forward to all that. There are a lot of good cars there in the 358’s.”

In moving out of the Sportsman and into the 358-Modifieds next year, Marcuccilli is set to run a much more limited schedule that what he’s done in the past. With the Sportsman car he ran nearly 50 races a year. There aren’t nearly as many opportunities on a regular basis at this point to compete with the 358-Modified.

“It’s good and bad,” he said when asked about not racing as much. “It will be nice to have a little bit of vacation time to do other stuff. There shouldn’t be nearly as much mid-week stuff anymore. My dad always said that we didn’t have to go to them, but when you love to race and as well as we do, it’s hard to stay home when there is a race we want to go to. With this we won’t be able to do as much.”

When asked about his expectations Marcuccilli indicated that they have realistic goals. There is going to be some learning involved while he also gets a step up in competition. He’ll be competing week in and week out against drivers like Larry Wight, Tim Sears Jr., and Pat Ward who have tons of success at Fulton and other places. They are joined by a strong list of talented former Sportsman drivers and others.

“I just want to be competitive,” said Marcuccilli. “We’d like to win some races, but we just want to be competitive. If you are competitive then the shot at winning a race is a lot higher. I’m just hoping to be good enough to possibly contend for a win here and there. I know I’m not going to win 20 races. We just trying to set goals that are realistic. It’s one of those things that we won’t know how good we are until we get going. I could be running for 10th week in and week out, I just don’t know. I hope we are better than that.”

Marcuccilli went on to thank everyone that has supported him over the years. He hopes to continue to have the good results like in the past as he looks to the future.