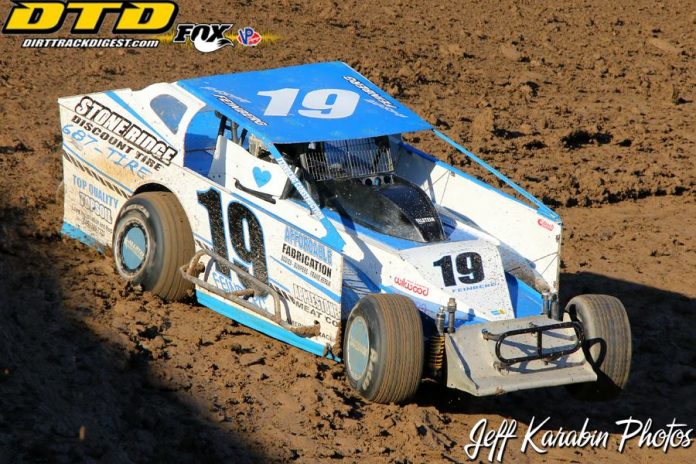 ACCORD, NY – Cold, more cold and snow were key elements in the Hudson Valley area on Saturday as the Accord Speedway was finally able to throw-down the gauntlet and complete the twice cancelled Halloween Havoc event. What began with heavy gray clouds with just a small mixture of sunshine, the excellent racing action heated up the Ulster County facility with excitement and raw enthusiasm as 120 combatants were on hand for the annual Halloween Havoc event. The Palmer Family completed their eighteenth successful regular season of ownership and promotion of their pristine quarter mile facility nestled in the foothills of Ulster County. The event was sponsored by the John J Liggan Insurance Agency located in Rosendale, New York. Special assistance came from Superior Landscaping from Walden, New York as they posted a $1,000.00 bonus for the Sportsman division winner. Due to the frigid weather most of the special events for the children were cancelled although all children in attendance received participation trophies courtesy of ASI Trophies, and a mighty thanks to Rich Roosa for providing the hayrides to the kids through the Accord pit area.

When all racing was completed, Cottekill, New York resident “Showtime” Danny Tyler had the opportunity to borrow Jason Feinberg’s fast running chariot for the day and with it carved out a wire to wire triumph to capture the fifty lap Hocus Pocus feature pocketing $2,500.00 for a hard but cold day’s work in the Arkel Motors Sportsman division finale. The Upstate Auto Pure Stock division feature found former track champion Travis Brockner in championship form as he took to the upper reaches of the speedway to grab the lead and race to victory. Joey Biasi hopped a ride in the Larry Drake owned sprinter and after a first lap mishap that sent track champion Mick D’Agostino tumbling upside down, captured the win in the Northeast Wingless Sprint Car portion. “Quick” Willie DeGraw was the class of the field with a dominating win in the Emmanuel’s Marketplace Fireball 4-Cylinder event and Jeff DeGroat made short work of the 28 car field to capture the Emmanuel’s Marketplace Four Cylinder 50-lap Enduro finale. Mike Brown had his vintage Falcon bodied racer humming to perfection and captured the Northeast Vintage Modified event.,

The Upstate Auto Pure Stock “Ghostbuster” excursion put the full-fendered drivers to the ultimate test with their thirty lap long distance event. Livy Johnson wasted no time in establishing the point as she grabbed the lead at the opening bell and proceeded to hold all of the competitors in check through the first twelve laps. With 23-cars in the field, some of the newcomers had fallen back and Johnson came upon them quickly and decided to take the low road around them only to find he avenue blocked and Travis Brockner, Greg and Bob Sleight all slipped past Johnson who quickly found herself in fourth place. Once in front, Brockner was able to build up a lead but some cautions would bring the field back together and keep the event close. Brockner would go and to capture the win with Bob Sleight in the runner-up role. Greg Sleight was third with John Hechinger fourth and Jay Smalley fifth. Following were newcomer Zack Seyerlein, Bill Deak Jr, Mike Skelly, Tim Southard, Ryan Brockner, Ray Tarantino, Chris Streeter and Joel Murns. The Tri-Counties Automotive Street Stock Shootout Series event would find most of the top ten drivers of the series in attendance for the event with Brockner and Bob Sleight gaining the most points for their work in the finale.

Danny Tyler took the lead at the start of the Arkel Motors Sportsman “Hocus Pocus” fifty lapper and established himself very quickly as the man to beat. Tyler found Corey Cormier at his tail section throughout the event but Tyler ran a perfect race and in the final ten laps was able to pull away to a six car length advantage at the finish. Tyler earned his pay for the win with Cormier trying his best but falling short of the win but gaining a solid second place finish. Newcomer Tyler Thompson finished third in what may have been his first look at the Accord facility. Travis Green continued his great work at Accord as the rookie driver was fourth while another fellow rookie Cole Stangle was fifth in a great showing for some of the first year driving talents. Kevin Stevens headed up the second five with Chris Lynch seventh, youngster Alex Yankowski eighth, Joe Toth ninth and John Aumick completing the top ten.

The WRWD Radio Sprint feature had a rocky start as on the initial green, Jeremy Quick ran into trouble and damaged his race car. On the second try, track champion Mick D’Agsotino went topside and nosed into the lead and newcomer Joey Biasi made contact with him and sent D’Agostino into a jaw dropping upside down excursion. D’Agostino was not hurt in the incident. The race finally got going with Biasi leading and Rich Mellor staying with him. A few laps into the event, popular Heidi Hedin in her return to the speedway had a steering problem and also went upside down. She was not injured in the incident. Once sorted out, Biasi led the remaining laps to capture the win with Mellor second, Dan Malley third, Rick Stone fourth and Corey Wood nailing down fifth place.

Ray See Sr was the early leader in the Northeast Vintage Modified event but after a few laps would see Mike Brown zoom past him. Brown would lead the rest of the way to capture the victory but had to hold off Josh Wilbur at the end to secure the win. Wilbur was second with Bob Johnson, Ray See Sr, Doug Atkins, Dan Wood and John Atkins following.

The Emmanuel’s Marketplace Fireball event found Willie DeGraw putting on a show from the opening bell. DeGraw found the top of the raceway to his liking and grabbed the lead while proceeding to leave the rest of the field in his wake. DeGraw captured the win with at least a half a lap margin with Ryan Heady, Ed King, Jesse Torrens and Brandon Conklin completing the top five.

The Emmanuel’s Marketplace 4-Cylinder Enduro bombers began their event with a pile-up in the first and second turns. While it didn’t stop the event, negotiating the area made for some fancy maneuvering from all of the competitors. Veteran campaigner Jeff DeGroat led the early laps only to give way to Willie DeGraw who was hoping to bag a double win for the day. DeGraw found his hopes diminished when his right front tire said farewell and DeGraw raced the remainder of the event on three wheels. Ted DeGrote took over the lead and he led until the halfway mark when an accident found a car upside down and DeGrote involved and out of the running. Jeff DeGroat assumed command of the lead and went on to win the hard fought battle with Ed King in the runner-up spot, Gene Helms third, Howard Jarvis fourth and Matt Gower completing the top five.

Promoter Gary Palmer spent most of Friday night and the early Saturday morning hours to drain the track of the water from Friday’s rain and even though choppy in spots during the heat racing, the intermission period allowed for all four channels of racing to be utilized for the feature events. A yeoman’s effort from Gary Palmer for sure.

Alex Yankowski, who captured two track titles at other speedways in 2018, took over the controls of the Muller Family hot rod normally steered by “The American Girl” Samantha Muller. Yankowski, who will be moving up the Modified ranks in 2019, was among the leaders early on until being assisted into the boiler plate during the event. Bill August, who steers Accord Videographer Tom Czaban’s racer, was on hand for the day’s event.

Marty Dibble, “The Godfather” of racing at Accord interviewed with speedway Announcer Steve Pados regarding his Upstate Auto quality used car facility. Marty explained he has many great units for purchase, whether it be a sedan or an SUV someone is in search of. The number to reach him is: 518-537-2277.

A big thanks to John J Liggan and his Insurance Agency for their continued sponsorship of the event. For more information regarding Liggan Insurance, check them out through email at: info@liggan.com. Grandma Ann’s pies were handed out to all of the winners and they are courtesy of Liggan Insurance, Wright’s Farm Market, Sunday Rosendale Farmers Market and Cousin Pete Donohue.

Lets us not forget the fact the United States Marine Corps is celebrating their 243rd Birthday. Thanks to all of our fine service people for helping to allow freedom to reign in our country and keeping and continuing to keep our borders safe. God Bless You!

A huge thanks to all of the fans who came out to support the event.

Racing fans are encouraged to begin making plans for the Annual “Gobbler” spectacular coming to the speedway on November 24th. Modifieds, Sportsman and Pure Stocks will be in action for the Saturday event. More details will follow shortly. Tickets are on sale now.

For further updates and information regarding all of the news and additions to the Accord Speedway, log on to their well documented website at: http://accordspeedway.com or call the speedway hotline at: 845 626 3478.