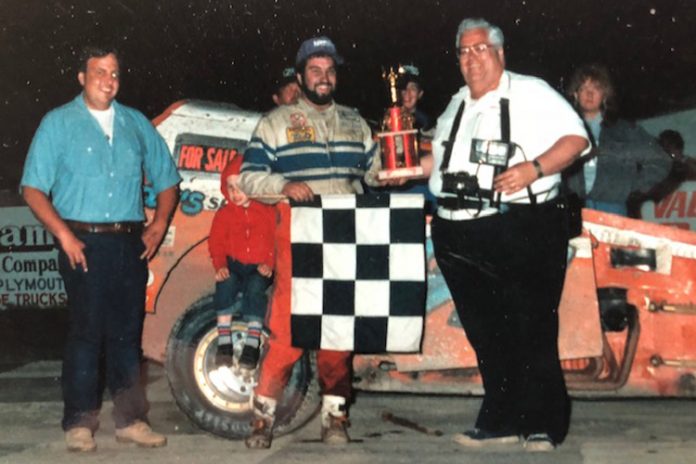 Sad news hit the racing world this past week, when news came of the passing of Clancy Miller, longtime track photographer at Fonda Speedway. Clancy was part of the Fonda landscape for 25 years as the track photographer, leaving the position in 2002. “The round man with a square deal” was how longtime Fonda announcer, Jim King described Clancy Miller at least once each night during the racing program. Miller was very active in his community and photographed many weddings during his career in photography. Sad was the news posted on Facebook as well on Sunday night as legendary veteran racer Frankie Schneider has passed away. Schneider was one of the most well known, and respected racers throughout his career. Schneider won nine Lebanon Valley open competitions and was the winner of the first ever Eastern States 200.

The latest information received from the new management team at Fonda Speedway, coming in 2019 in an effort to send along their appreciation to the loyal fans of Fonda a “Fonda Speedway Dollar Day” was announced.

On Saturday, May 18, 2019, your admittance into the famous Fonda 1/2 mile will be granted with payment of just one dollar. All weekly divisions will be in racing action that evening, which does include the Modifieds! The team continued by said, “we are extremely happy to be able to do this for undoubtedly the greatest fans in the dirt track racing world. We hope to see you come out & enjoy a nice evening with us at the Track of Champions, Fonda Speedway!”

For more information on what’s going on at Fonda Speedway for 2019 keep tuned into the Speedway Website: www.thefondaspeedway.com This past Saturday, November 10th the New England Auto Racer (NEAR) Hall of Fame held its annual Hall of Fame inductions at the annual banquet and a local car owner and builder, although not a New Englander, was among those in the class of 2018. Ken Tremont Sr. represents the dirt world, and was the only non-New Englander in the Class of 2018. The all-time greatest car owner and engine builder at Devil’s Bowl Speedway in West Haven, Vermont, Tremont has 93 wins and 10 track titles (and counting) within the borders of New England, and he remains active with both his son, Ken Jr., and grandson, Montgomery, driving his cars. Tremont’s accomplishments in his native New York State — though they were not factored into his nomination by NEAR — bring his career totals to well above 350 race wins and nearly 50 championships.

Also honored at the NEAR banquet with the Mitchell/Ratta Memorial Media Award was area auto racing photographer, John Grady who passed away in August, 2018. John began taking photos at the now defunct Menands Raceway in 1961. Grady’s talent helped bring Albany-Saratoga Speedway to prominence with his photos of modified action at the track. John also mentored many young photographer by sharing his photographic expertise to help them improve. The annual “Lost Speedways” program held annually at the Saratoga Auto Museum and organized by Ron Hedger is just around the corner. Saturday, November 24 this very popular event will take place and this year is stacking up to be one of the more popular ones. Albany-Saratoga Speedway promoter, Lyle Devore will be just one of the speakers. Mini-Stock veteran and star, Bob Hackel is another, and DIRT Hall of Fame, driver, C. D. Coville. Videographer, Bob James of BOBCO Video will have videos of the action packed careers of C. D. Coville and Jack Johnson. Starting at 11:15 am memorabilia will be on display in the main gallery of the museum. Also in the memorabilia area, author Lew Boyd will have his newly released book on Lebanon Valley Speedway and others like the recent book written by Gary Balough with Bones Bourcier. Chris Grady will also have his many vintage photos on display. Lunch will be available from Dinosaur Barbecue. The day’s program is available for the regular admission to the museum.