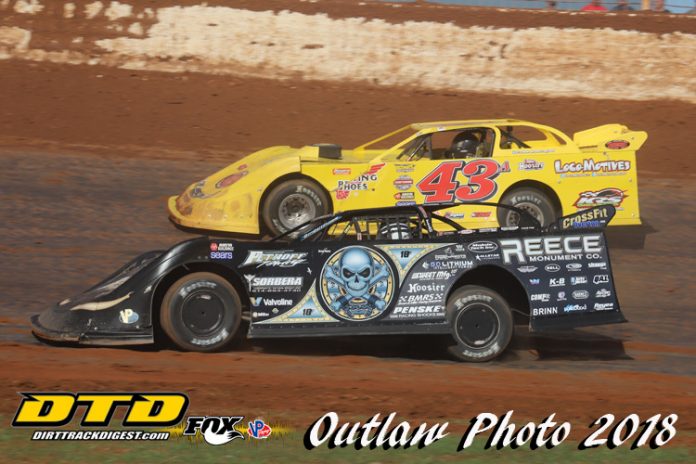 SAN TAN VALLEY, AZ — Scott Bloomquist of Mooresburg, Tenn., has confirmed his participation in the Jan. 5-13 Keyser Manufacturing Wild West Shootout presented by O’Reilly Auto Parts at FK Rod Ends Arizona Speedway — and not surprisingly, the Hall of Fame driver is making the long trek across the country with his familiar No. 0 Dirt Late Models with only winning on his mind.

The soon-to-be 55-year-old superstar watched from afar earlier this year as one of his young proteges, Ricky Weiss of Headingley, Manitoba, won twice and contended for several other victories in the Wild West Shootout driving a Sweet-Bloomquist Race Car. Come the event’s 2019 edition, Bloomquist knows Weiss will be one of his prime rivals, but he’s confident he can overcome the talented Canadian — and the rest of the Super Late Model field — to collect the huge Keyser Quarter-Million Challenge bonus money on the line.

For the fourth consecutive year the Keyser Quarter-Million Challenge offers Super Late Model drivers a blockbuster $250,000 bonus for sweeping the six features. In addition, winning five of six features will earn a racer an extra $100,000; capturing four A-mains offers a $25,000 prize; and topping three headliners will provide a $10,000 check.

Bloomquist, of course, has his eyes on the biggest prize.

“The only thing that I might feel bad about is Ricky’s been so good out there, we want to go out there and annihilate ‘em and take that whole bonus home with us,” Bloomquist said. “I know I’m gonna have to race Ricky for it, but hopefully we’ll all be friends when it’s over with.

“Ricky’s such a happy-go-luck guy that I think he’s just gonna be smiling either way,” he added when asked about the 30-year-old Weiss’s reaction to Bloomquist joining the Wild West Shootout competition. “He might not even say what he thinks, but he’s gonna have a smile on his face. I think he’ll enjoy racing with me and the challenge, too. He’s obviously had some great performances this year.”

With 12 victories and a third-place finish in the Lucas Oil Late Model Dirt Series points standings on his resume in 2018, Bloomquist heads to the Wild West Shootout for the first time in his storied career feeling like he’s carrying plenty of momentum to chase the huge bonus checks.

“I think we’re at a point with our program, if I’ve ever been in a place where I think I can get out there and get it done, it’s now,” Bloomquist said. “It’ll be exciting, I know that.”

The racy 3/8-mile FK Rod Ends Arizona Speedway and six nights of action in the sunny Southwest were prime factors in Bloomquist’s decision to start his 2019 racing season in the Grand Canyon State.

“You get out there, and, being it’s the same racetrack (every night), you have the ability to fine-tune your car in many ways,” Bloomquist commented. “To get to go out night-after-night, and then get a break to think about it without any distractions with things at the house (on off days), it’s real big.

“Really, the racetrack, that’s what’s made me decide to go. Watching the racetrack and how it raced and seeing you absolutely can race. And the fact that the fastest guy should win the race every night … and that’s what I’m planning on being.”

Bloomquist also expects to see some familiar faces from his past during his time racing in Arizona. After all, he lived in southern California and began his Dirt Late Model career at tracks there nearly four decades ago before relocating to Tennessee in the mid-‘80s to find stardom.

“Going out to New Mexico for that modified race (in October), there were some people I raced with and some fans who brought back memories and kept reminding me of things I almost forgot about from California,” Bloomquist said. “I hope they can make the trip out, whatever fans have kept up with this from out there.”