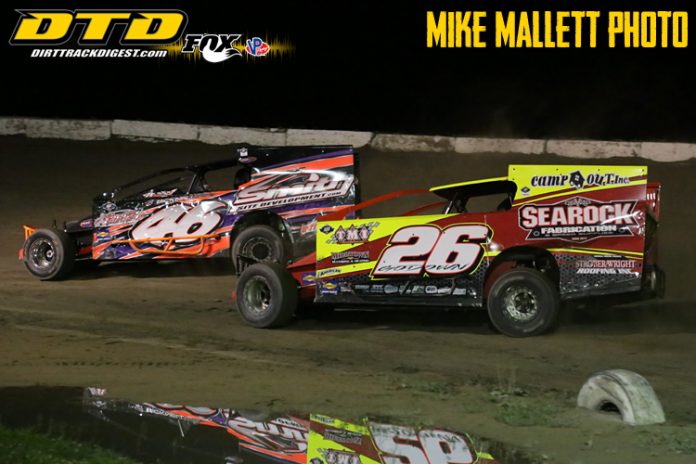 From March through October, the series provided fans with excitement across four states – New York, New Jersey, Pennsylvania and Delaware – while racers competed for the most lucrative monetary offerings since the series’ inception in 2014 as Sunoco Race Fuels and distributor Insinger Performance of Dushore, Pa., sweetened the pot.

Once again, the STSS Modified tour was divided into manageable North and South Regions.

A total of 15 events were completed despite a summer filled with wet weather with a series-wide average of 43.7 Modifieds per event.

The Halmar International-sponsored North Region proved the depth of talent on the series, with five first-time series winners during the season.

Jerry Higbie of Newburgh, N.Y., was the first to break through on Tuesday, July 3, when he drove the United Pump & Tank No. 48 to Victory Lane at Accord (N.Y.) Speedway.

Westfield, Pa.’s Billy Van Pelt thrilled the home crowd at Woodhull (N.Y.) Raceway when he crossed the checkered first to take the ‘Hustlin’ the High Banks 54’ on Aug. 9.

In perhaps the most exciting race finish all year, Marc Johnson of Guilderland, N.Y., emerged victorious from the ‘Stampede’ at Albany-Saratoga Speedway in Malta, N.Y., on Wednesday, Aug. 15.

Mike Gular of Boyertown, Pa., broke through with a huge upset win worth $10,000 at Orange County Fair Speedway in Middletown, N.Y., to kick off Eastern States Weekend on Oct. 18.

A new face has emerged as the North Region champion, as well. Sidney, N.Y.’s Billy Decker for the first time takes the title as Short Track Super Series champion of the Halmar International-backed North Region. Decker will receive $12,500 for his efforts.

Ryan Watt of Boyertown, Pa., earned the series championship off the strength of two wins for the Ron Roberts team. Watt took the opener at Georgetown (Del.) Speedway in March, then topped what ultimately became the finale in the series debut at Port Royal (Pa.) Speedway in October.

Like Watt, Matt Sheppard of Waterloo, N.Y., was a two-time winner for the Maryland-based Hurlock Auto & Speed team. Sheppard’s two conquests came at Delaware International Speedway in Delmar, Del., on May 24 and BAPS Motor Speedway in Newberrytown, Pa., in late-July.

Big Diamond Speedway in Minersville, Pa., was slated to host the series’ only combined North-South race, but that program fell to rain not once, but twice. The South Region Mid-Atlantic Championship at Georgetown also succumbed to the weather after a coastal storm hit southern Delaware on the final weekend of October.

The STSS organized a three-pronged Sportsman effort in 2018. Crate 602 Sportsman were featured for the first time, running North and South Regions like their Modified counterparts.

Corey Cormier of Otisville, N.Y., picked up the South Region Crate 602 Sportsman crown, with Tom Collins Jr. of Lansing, N.Y., topping the North Region. Both will receive $1,000 for their efforts.

With the Northeast trending toward Crate 602 Sportsman racing entirely, the STSS Open Sportsman Series has concluded its final season. Dominic Roselli of Highland Lakes, N.Y., reigned supreme over that circuit.

The 2018 Short Track Super Series season will reach its conclusion on Saturday, January 5, 2019 with the ‘Night of Champions’ Awards Banquet at Bear Creek Mountain Resort & Conference Center in Lehigh Valley, Pa. Banquet ticket order forms have been posted on the web at www.shorttracksuperseries.com.