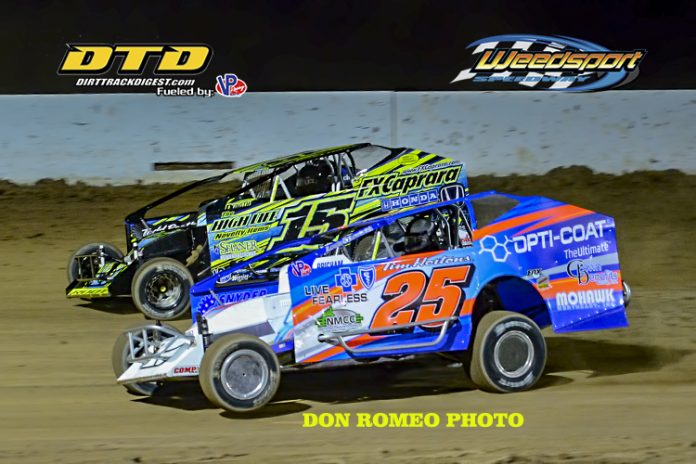 A new feature on the 2019 calendar will be the six-race Champion Oil Modified Series presented by Stirling Lubricants.  More details on the series will be announced soon, however fans can count on seeing Big Block Modifieds at Weedsport Speedway on May 19, May 27, June 9, June 16, July 28 and September 2 in 2019.

“We’re proud to have Champion Oil and Stirling Lubricants join us to put together a great program for Modifieds in 2019,” said Weedsport Speedway promoter, Jimmy Phelps.  “Partnering the Modifieds with the World of Outlaws, All-Star Sprints and USAC Sprints to begin the season will be a great combination.  Overall, the 2019 calendar is set to build on a great 2018 season and we’re excited to reveal more details into the off-season.”

The month of May will be a busy one at The Port as the Craftsman World of Outlaws Sprint Car Series shifts back to the beginning of the season to open the 2019 calendar with the Empire State Challenge on Sunday, May 19, joined by the Champion Oil Modifieds presented by Stirling Lubricants.

Memorial Day will once again see the Super DIRTcar Series Big Block Modified Heroes Remembered 100, joined by the Sportsman Shootout Series on Monday, May 27.  The Heroes Remembered event will be turned into a weekend affair with a special karting race set to take place at Weedsport Kartway on Sunday, May 26.

June will once again feature Sprint Cars as Tony Stewart’s All-Star Circuit of Champions returns on Sunday, June 9 followed by the USAC National Sprint Car Series and the NY6A Micro Sprints on Sunday, June 16.  Both events will be paired with the Champion Oil Modifieds presented by Stirling Lubricants.

There will be a break in the racing action on Saturday, June 22 for the Renegades and Outlaws Tour featuring Travis Tritt, The Charlie Daniels Band and The Cadillac Three before a fast-paced month of July gets into high gear.

As is tradition, the 6th annual Sportsman Classic will open the month on Tuesday, July 2 along with the RUSH Late Models and the NY6A Micro Sprints.

Hall of Fame Weekend in late July will once again see a flurry of activity.

The action will start on Thursday, July 25 with the annual Hall of Fame induction ceremonies before another special karting event takes place on Saturday, July 27 at Weedsport Kartway.

The annual Hall of Fame 100 for the Super DIRTcar Series Big Block Modifieds will round out the weekend’s action on Sunday, July 28 along with Sportsman and Classics on DIRT.

August will feature the return of the ESS Sprint Cars for the ESS Legends Reunion along with Sportsman and the DIRT Modified Nostalgia Tour on Sunday, August 11.

Finally, the season will once again close with the Super DIRT Week Kick-Off Party on Wednesday, October 9 featuring the DIRTcar 358-Modified Series and Sportsman.

The full Weedsport Kartway schedule for 2019 will be announced next week.

Sunday, May 5: Test and Tune – All Divisions