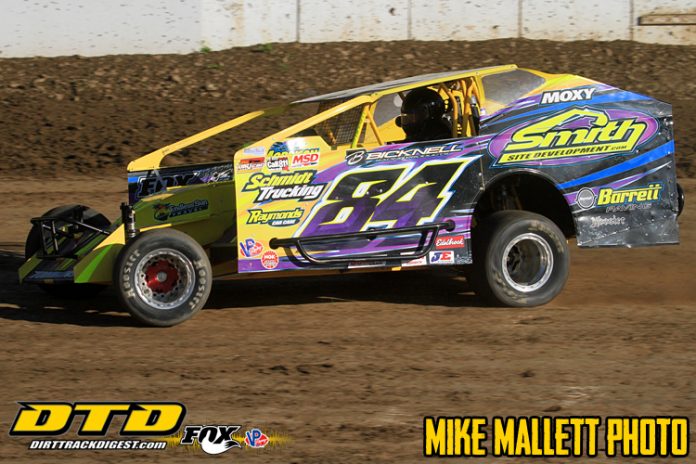 Gary Tomkins didn’t have the season he would have liked in 2018 at the Brewerton Speedway. Tomkins went winless on the season while scoring only four top five finishes in 12 starts. He ended up finishing seventh in the final point tally. Unfortunately it wasn’t the results he or car owners Tom Coar and Chris Clark were looking for. As a result, the team has elected to not continue their big-block program in 2019.

“We didn’t have the season we should have had, we should have been better,” said Tomkins Friday at the Northeast Racing Products Trade Show. “It came down to the fact that the motor just wasn’t up to snuff. Of course, that cost money. We had a big-block motor, it just needed to be better than what we had. We were hitting our heads against the wall.”

“I give Tom and Chris credit. They busted their butts to bring a car to the track for me, but we were hindered by that. To fix that you have to spend a bunch of money. It got frustrating. I don’t blame them one bit for deciding not do it this year. When I talked to Tom, they haven’t ruled it out in the future, but they are not doing it this year.”

Tomkins was the 2004 Super DIRTcar Series champion and he’s an 18 time winner in his career with the series. His last series triumph came back in 2016 at the Weedsport Speedway. The last few years have been tough to Tomkins as he hasn’t been able to secure a ride for more than one night a week or special events. He still feels like he’s got the ability to get the job done.

“It’s frustrating,” mentioned Tomkins. “I know given the opportunity I think I can compete as much as anybody. You got to have that confidence to be a successful race car driver. I just need an opportunity. I’m going to keep trudging along to see what comes up. You look at Danny Johnson, he’s probably one of the best drivers I’ve ever raced against. He’s had some down years, but now he has a situation he can win at any time again. You got to just keep plugging along.”

Tomkins feels like he’s even better than he was when he won the series title over a decade ago. He’s grown as a driver and given the right opportunity he’d be able to produce championship results again.

“I still feel physically and mentally that I’m as good as I’ve ever been,” he said. “I’m probably smarter than I was when I won the championship. You learn so much more, you never stop learning.”

Although things are tough right now for Tomkins, he’s not giving up hope. He’s going to continue to beat the pavement and try a find a ride that allows him to continue to do what he loves on a weekly basis. He would love for the opportunity to be near his Clifton Springs, N.Y., home, but if not, that’s fine too.

“I’m not ready to quit that’s for sure,” stated Tomkins. “It’s just a matter of trying to get something together. It’s big-block racing, racing in general and it’s not easy to do especially when I don’t own it and I’m driving for someone else. I’ve been very fortunate. I’ve been driving a Modified for a long time and for the most part driving other people’s cars. That is a pretty good deal. I want to continue to do it. Hopefully I can find something or put something together. Obviously I live in Central New York and I want to race here, but if I have to I’ll travel.”