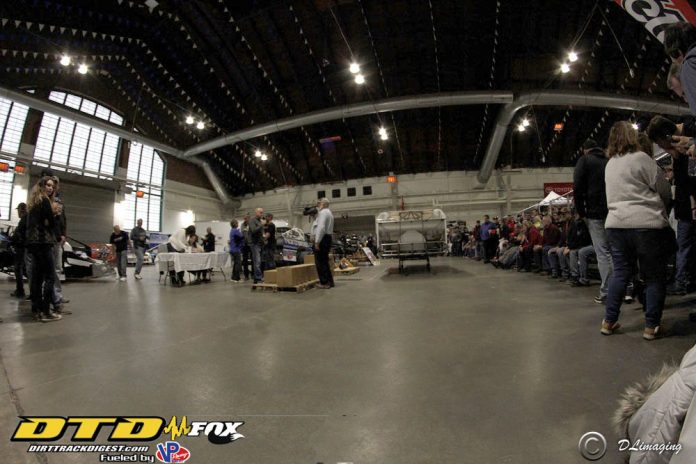 Jeremie Corcoran had a goal to make the Northeast Racing Products Trade Show a must attend show for those in the racing industry. He wanted the show one that drivers and racing vendors alike knew they had to be a part of. The 2018 edition lived up to those expectations.

For starters, Corcoran indicated the show was a nearly a sold out affair for vendors as there was no more room in the building while leaving enough space for the auction. He was forced to cut the auction space in order to get several more vendors into the building.

“We had an incredible response from vendors,” cited Corcoran. “We had people calling right up to the last week looking for space. It was a sell out with the space we had available to make the auction happen. We actually had to make that a little smaller to get vendors in at the last minute.”

Mother Nature attempted to limit the show on Friday night as nearly a foot of snow fell in the Central New York area overnight and into the morning. Even with that, attendance was on par with the 2017 edition. Attendance on Saturday soared which was helped by the fact that he had a huge influx of drivers that took advantage of the free admission program.

“We had 350 drivers take advantage of the free admission deal,” stated Corcoran. “We wanted the vendors to see value in coming to our show and we proved that over the weekend. Everyone that I was able to talk to was really happy they supported the show. We can’t thank everyone enough for coming. We are already trying to come up with new ideas for next year to get even more people to come out and support us.”

Corcoran was also extremely happy with this year’s edition auction. Like year’s past, a full Bicknell roller was put on the block along with both a Teo Pro Car and Troyer frame and body. A Bernheisel Late Model frame and body was auctioned as was a full crate engine from Donath Motor Worx. Everything was sold.

“The support from the manufacturers was awesome as always,” said Corcoran. “We were able to sell all of the big ticket items this year for than last year as well as several lots of used parts. I couldn’t have asked for the auction to go much better than it did. We wanted to continue to grow the auction after last year and I think we did. We are going to try and make it even bigger for next year.”

Corcoran went on to thank each of the manufacturers for supporting the show. He also thanked the main show sponsors which included Keizer Aluminum Wheels, VP Racing Fuels, Weedsport Kartway, Hoosier Racing Tires, Snap On Tools and Pace Performance.

The show will return in 2019 as Corcoran hopes to continue to see the growth that helped make the 2018 a success in his eyes.