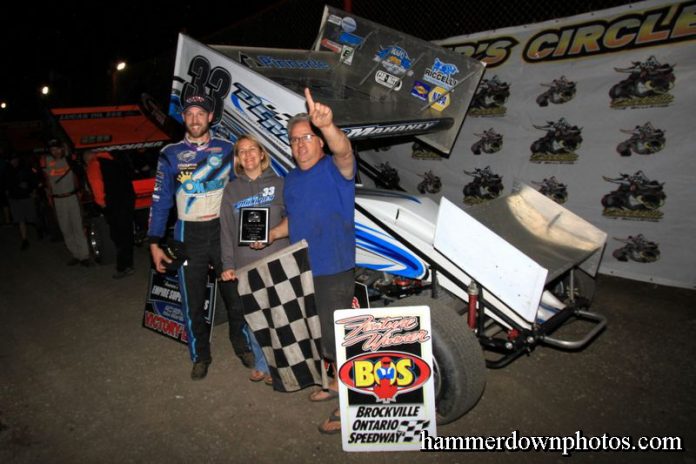 He began career as a formidable driver and when that time came to an end he then turned his focus to car ownership. Now, both of those days are done as Emery has elected to retire from owning and driving Sprint Cars.

“A year ago I kind of felt like it was time,” cited Emery. “I was kind of getting burned out spending all that time working on it. It takes a good crew when you get older, but I really didn’t have a lot of crew during the week to do stuff. Last winter I decided to put my own motor together and all that and go all out with Mike Mahaney. Mike said he would do whole tour. I figured I’d give it one more last ditch effort.

“I didn’t say much to people because it’s always the thing where people say they are going to retire and don’t. As the season went on … 30 years ago I’d didn’t think anything of doing 30 races, but this year I did like 15 and I was dragging. This year the time was right.”

During his own driving career, Emery scored eight full-point feature wins with club while placing himself in the top 10 in points on nine different occasions. He’s also has a handful of solid points efforts with others behind the wheel as well.

“It took me nine years to win a feature race,” commented Emery. “For nine years we pushed to try and win. Once we got that first one we started winning. I had a lot of great crew members over the years and it was a lot of fun. Then there came a time when it was time to step aside.”

After making the migration to ownership, Emery had some notable drivers behind the wheel of his No. 33. Over the years he’s had the likes of Stewart Friesen, Shawn Donath and Jesscia Zemken-Friesen. He had some incredible memories with them including two Cole Cup wins with Stewart in the car. For his final season, he chose Mahaney as the pilot. The team scored one win on the year at the Brockville Ontario Speedway which will go down as his last.

“When I decided to be an owner I had Jess and Shawn drive for me and I was able to get them to victory lane,” stated Emery. “I never thought I would be owner, but I got to that point somehow. I got lucky I picked the right drivers and right people.

“When Shawn was here we did pretty good before he decided to put together his own team. Stew and I were supposed to only do three races together and it ended up being more. In two years we won 13 shows or something like that. After that I was ready to maybe hang it up but I had the arsenal so I figured one more time lets take shot at the title. We got Mike. He’s been a good shoe.”

In his final season Emery and Mahaney were able to finish seventh in the final Empire Super Sprint point standings. When Emery achieved his last win with Mahaney behind the wheel at Brockville, they were able to beat perennial ESS favorite Steve Poirier.

“It was huge,” commented Emery. “It was one of those nights where everything worked great. We pulled the right pill and the car was great. We lined up against Steve Poirier and we beat him fair and square. It was a surreal experience I have to say. For Mike it was surreal. It was huge to just get that sticker in the last season, to say we got it.”

Emery has already been able to sell of all of his Sprint Car equipment. One of his cars went to good friend and former ESS regular John Karklin for his son Jake to compete with while the other piece went to another youngster Tyler Cartier.

“One car went to John and Jake Karklin who have been good friends of mine for years and other car sold to Tyler Cartier,” he said Saturday from the Northeast Racing Products Trade Show. “I have to say, today John picked up the rest of my stuff. It was sad when I fired the last car up. I fired it up in the backyard and it hit me that I’m not doing that anymore.”

Although he’s done as an owner he isn’t quite ready to hang up the fire suit as he did make another purchase to allow him to have some fun. He won’t be beating the dirt anymore, rather he’ll be taking to the pavement to get his racing fix.

“I’m excited to move to the next phase,” commented Emery. “I bought an old Busch North car to go road racing with maybe a few times a year. The biggest thing is it has a nice big Chevy. It’s got 700 horsepower. I can fire that thing up and listen to it run and have my deal.”

You can also expect to see Emery at the track when the Empire Super Sprints visit as he hopes to catch on with a team and serve as an adviser. He’s hoping to impart some of the knowledge he’s learned onto another team in hopes of helping them share in some of the successes he’s had in his career.

“I want to be around the club more,” commented Emery. “It’s family for me and Barbara (Patterson). She’s been around it for 30 years too. It’s a lot of friends and family. I’m going to try and find a team to land with to help consult driver wise and crew chief wise. The biggest thing I’ve been in the car and I’ve been to some of these tracks for 30 years. I’ll be able to help them transition better. Some of the younger generation get impatient and in three years they quit. I’m hoping to be in the position to keep them racing.”

There is no doubt it will be different for the ESS faithful when they pull into the pit area and the No. 33 isn’t competing. It will surely be missed.