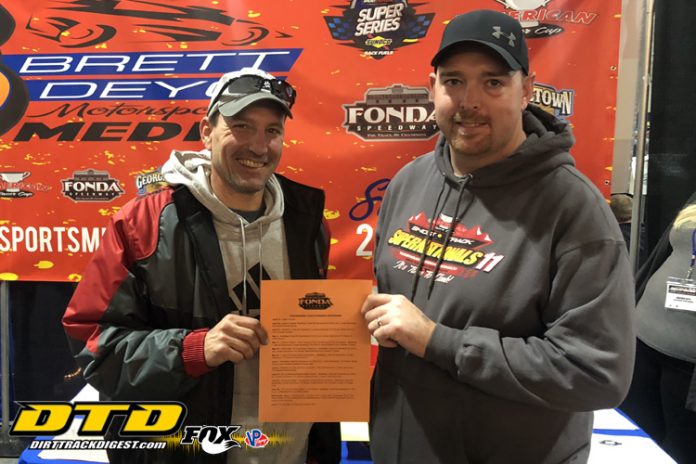 Bobby Varin will return to Fonda and will also be competing at Glen Ridge this coming season, after a couple of years absence. Varin and Craig Hanson were checking over the Fonda schedule when we shot this photo. Hanson will also race at Fonda in 2019.

Great to see C. G. Morey walking around the show at the NYS Fairgrounds after his heart stopping crash at Eastern States. C. G. said everyone knows it is a dangerous sport and you can work on safety but accidents still happen.

Bill and Kim Shea have taken some of the worst weather a track could have and are still in the fight. Don’t forget to support those who do all they can to bring us great racing. season. We’ve known Jamie for some time and we are happy with the choice. With Jamie we also get Denise who will be in charge of the concessions. We have sampled food from Denise when they were at Afton and we think Fonda fans are in for real treat.

We ran into Brenda and Bret Belden with their two beautiful granddaughters, Alexis, 5 and Alana 2-1/2. Bret’s plans for 2019 is to be back a Fulton Speedway on Saturday nights in his Late Model where he had two wins this past season and was third in points. Another show attendee who was very interested in Billy Decker’s No. 91 in the BD Motorsports booth is Owen Alger, son of Brad Alger driver in the Crate Sportsman division at Utica Rome.

DIRTcar Champions at the Holiday Inn in Liverpool was once again a chance to celebrate the stars of dirt track racing in the Northeast and Canada. World Racing Group CEO, Brian Carter spoke to the crowd at his 15th DIRTcar banquet and said he is looking forward to 2019. The group is continuing improvements at Volusia in Florida and hope to be ready for Speed Weeks in February.

Lyle Devore and Marcy Mangino were honored as Promoter of the Year at the DIRTcar banquet on Saturday night.

Mike Perrotte said goodbye to the DIRTcar Northeast crowd as Super DIRTcar Series competition director and welcomed his successor, Dean Reynolds. Mike thanked everyone on his team and said he was thankful for the great drivers on the tour each of his four years. Dean said he has big shoes to fill and is excited to keep things going for 2019. Dean also announced the increase in DIRTcar Series purse for the first time in 15 years; minimum, $7500 to win, $1000 for tenth and $500 to take the green. SDS will return to Eldora in 2019.

First awards given at the DIRTcar Championship banquet were the Hoosier Tire Weekly Championship honors to the top 15 in each division. In Pro Stocks it was Josh Coonradt who took home the champion’s trophy after only his second year. Josh had eight wins on the year. Martin Pelletier took home honors in the Sportsman division, with 21 wins, 35 top tens and 34 top fives. 358 Modified honors went to Steve Bernier with nine wins, 26 top tens and 26 top fives. It was Matt Sheppard who was champion in the Modified division. Number 1 Speed sponsored the Rookie honors and the Pro Stock Rookie was Utica Rome’s Travis Welch, Sportsman Rookie of the Year was Tyler Reynolds of Brockville Speedway, 358 Mod Rookie was Ronnie Davis, III of Fulton Speedway and Modified honors went to Jack Lehner of Albany Saratoga. Jack ended up ninth in points at the very competitive track this past season.

Chevy Performance awarded two 602 Motors to lucky winners whose names were drawn during the night. Pro Stock winner was Rick Duzlak and Sportsman winner was Will Shields.

More sad news came from the racing community this past week when word was received of the passing of three-time NASCAR Champion, David Pearson who and had 105 wins in NASCAR’s premier division. Pearson was 83. Pearson was one of the NASCAR drivers that came to Fonda in the sixties.

Another sad turn came as Joe Wunderlich passed this past week. Wunderlich was a competitor at Fonda in the fifties, driving the No. $$ car. He was more recently known as the sponsor on Kenny Tremont’s No. 115, and owner of Wunderlich Sand and Gravel.

As we close this week we wish all of our readers a Happy Thanksgiving. Until next time please send all news and/or comments to biittig@yahoo.com