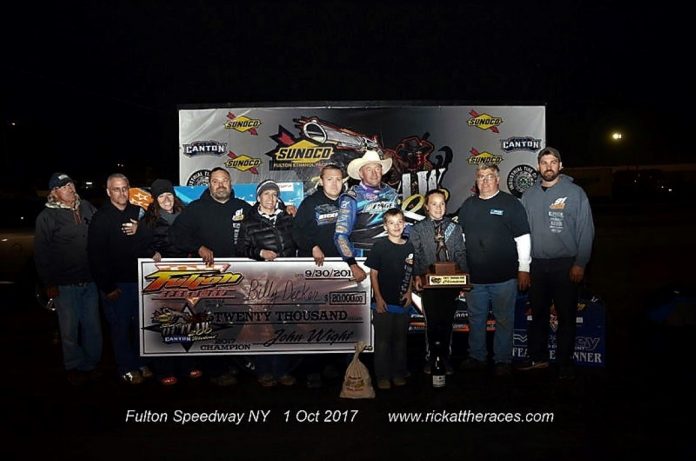 Speculation began last week that Mike Payne was retiring from motorsports after an announcement was made that saw his driver Billy Decker return to LJL Racing for the 2019 campaign. Payne indicated on Monday when he spoke with Dirt Track Digest that he isn’t going away, but his role in the sport is going to change drastically moving forward.

Payne has always been a hands on car owner. That’s going to change as Payne indicated he wants to remain in racing, but his priorities have changed. Family and work commitments are now playing a much more important role in his life.  As a result, his role in the sport must also change.

“When I hired Billy (Decker) I just needed to him to show up at the track with his helmet bag, race and go home,” commented Payne. “Now, I need to show up at the races with the bag, go home and not worry about the car anymore. I’m looking for a situation where I can drop my car off and have someone take care of it. If I have time I’ll show up, if not, I won’t. Right now I’m in the final stages of possibly putting a deal like that together where I can be an absentee car owner.”

Payne was nothing but complimentary of Decker and all he did for the team. He was glad that he was able to land on his feet with another ride.

“I told Bill I could commit to four races in the current situation if that works for you, if it doesn’t I appreciate you sticking it out,” stated Payne. “I quit back in June when I couldn’t run the series no more. I told him if something else came along no hard feelings.”

Due to his commitment to racing the last several years his ability to do all of things with his family he wanted to do was limited. As he moves forward he’s hoping to spend some more time with them as they grow older.

“My son is a senior and I wanted to go to all his soccer stuff this summer,” mentioned Payne. “My daughter is an eighth grader and she was moved up to varsity. She plays travel as well. I want to attend that stuff. There are things in life that are more important than racing. I’ve been doing this for 10 or 12 years and I missed a lot of stuff. I don’t want to do that anymore.”

He also indicated that he recently purchased a 602 Sportsman for his son Zach to race. That track has yet to be determined. They’ve been trying to get a car together to go racing the last couple of years, but things just didn’t work out. This time they purchased a race ready car.

“We have all the stuff there to finish it, but we were never going to finish,” commented Payne. “We had all the wires and plumbing to do it, we just couldn’t get it done. This time we bought one right after it came off the track. I know he’ll be able to race next year. He did all the work on the cars last summer and plugged away this summer until he stepped up his soccer program. We’ll see how that goes. Now he has his own hot rod and he will run one night a week. The only thing I might have to do is tow it to the track for him, but I’m not even sure he’ll need me for that.”

Besides the time set aside for family, Payne works as an independent contractor for Fed Ex. His company handles package deliveries throughout several different parts of New York. As the company continues to grow, he has to turn his attention toward that.

“I need to focus on the work deal right now,” stated Payne. “Since I bought it in 2017, we are up over 30 percent and I just bought out another contractor right before Charlotte. It just continues to grow. I have to make sure I focus on that. I want to be able to retire at some point.”

Although it’s a much different situation moving forward, Payne also mentioned that if the business continues to grow and he gets to a point where he can retire, you may just see him come back in a more active role in the future.