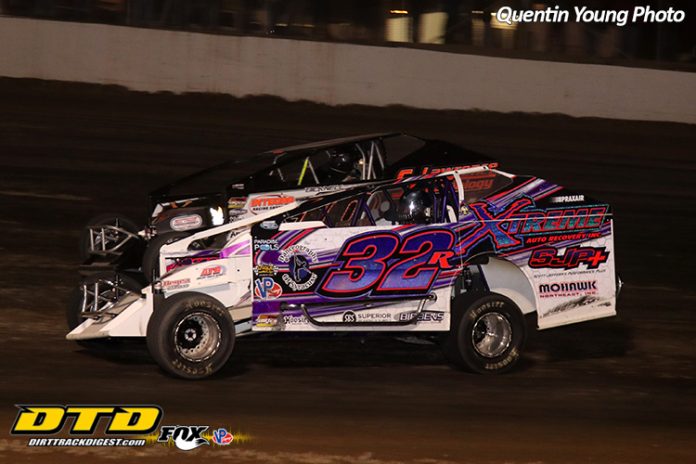 Just two years removed from a highlight reel season in the Sportsman division and a very respectable debut in the 358-Modifieds last year, Ronnie Davis III is making another giant step in 2019.

Davis posted an announcement on Monday on the RAD Racing Facebook page indicating that the team will be going big-block racing at Brewerton Speedway on a weekly basis and will also compete at the Weedsport Speedway in a car owned by Tom Coar and Chris Clark.

The new ride will carry the familiar No. 32R number on the side panel.

Ronnie Davis III told Dirt Track Digest, “I’m super excited to finally have a chance to drive a big-block. It’s been a dream ever since I started racing. To race with my biggest idols in the 358 is an awesome experience, but to be able to do it with them in the big-blocks now…that is unreal.”

A year ago Coar-Clark owned the ride for Gary Tompkins which had a similar schedule. However, the owners and driver parted company after the 2018 season.

Dirt Track Digest reached out to Ronnie Davis III and his father after the announcement was made.

Ron, the elder of the two, said, “We are very excited these guys gave Ronnie the opportunity to prove himself. We first met them yesterday (Sunday) and they had called him last week and wanted to meet with us.”

Ronnie explained, “Tom called me wondering if I had anything planned on Friday night at Brewerton and was wondering if I would like to drive their car. In this sport you take the opportunity when you can get it.”

Continuing he said, “They are supplying everything, a new Bicknell built in February and a Morrison engine. They will maintain the car at their shop and we will continue to keep the small-block in our shop.”

Ronnie noted, “They will mainly be maintaining the car and I will do my best to help out when I can between getting the 358 ready and making the hour drive out and back to their shop. My expectations are to give these guys the results they deserve and like always to get those wins.”

After the meeting on Sunday, Ron said, “Ronnie smiled all the way home from Whitney Point and he’s still smiling today.”

Though the plan is for Brewerton and Weedsport, Ronnie said, “Fulton would most likely be the only Super DIRTcar Series race at the moment.”

There will be plenty of racing opportunities for him this coming season as Ronnie explained, “We will run the 358 the same as last year at Fulton and on the tour that we followed last season. I’m even more confident with the 358.”

Ronnie Davis III had a standout campaign and hopes to keep climbing the racing ladder and looking ahead he said, “It’s going to be a learning curve for us, but I still want those wins. And most of all maybe give the fans someone new to root for!”

The RAD shop should be quite active next year, as Ron said, “Jake (Davis) is moving up to Sportsman so it’s definitely it is gonna be another busy year for us.”