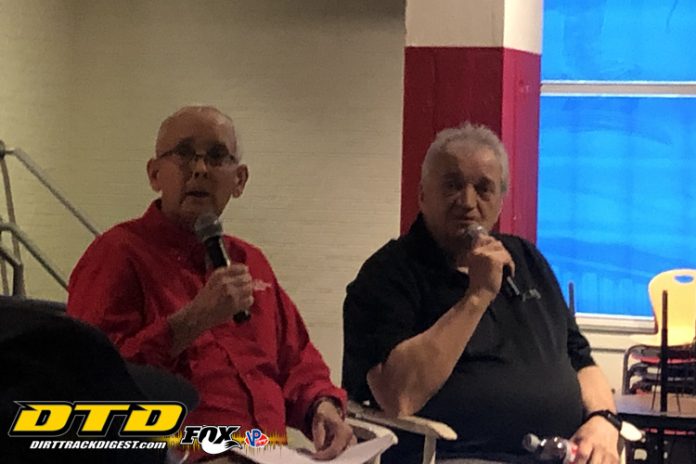 This season has had so much to do with the weather so why would it change now. Our first plans were to head to Accord Speedway for the running of The Gobbler but saturated grounds forced postponement until this Saturday, December 1st. Our next choice was easy, inside a nice warm building where there would be talking racing for much of the afternoon. The program at the Saratoga Auto Museum spearheaded by Ron Hedger. Each year Ron puts together a group of presenters from all over the map to talk about auto racing in his “Lost Speedways” special.

The first couple of hours, beginning at 10 am, videos provided by Bob James of Bobco Video, were playing that chronicled the careers of Jack Johnson and C. D. Coville. While all this was going on attendees enjoyed the multitude of tables full of racing history for all to look at. After a bite to eat from Dinosaur Bar-B-Que of Troy everyone moved to a room packed with chairs for the presenters portion of the program.

First on the program was a power point presentation by the Museum showing the building of a quarter midget, one of their many programs given to get kids during the year to get them involved in the sport.

Next was a presentation by Bill Ladabouche on the history of racing in Vermont. Bill had a power point with many pictures of eleven race tracks in the early days of auto racing. We had a chance to see photos of unique race cars, some that we had never seen before. One with the roll cage on the outside of the car.

Next up was long time presenter, Ken Parrotte. Ken’s talk was on the Moody Mile long before it had the nickname. Indy cars at the Syracuse Fairgrounds was the focus of his talk. He told of drivers that raced Indy and also the Syracuse oval spanning from 1903 to 1974. Lee Wallard who won Indy in 1951 was from Altamont and suffered a career ending injury at Reading Fairgrounds Speedway. Tony Bettenhausen took over the ride and won eight events including Syracuse.

Next was to be Mini Stock sensation, Bob Hackel but personal issues kept him away but we did get to see his power point presentation and many attendees had input on Burden Lake and Pine Bowl Speedways. Hackel’s father ran Burden Lake Speedway. Ken Tremont, Sr. said he attended all races held at Burden Lake because he lived right down the street. Next Ron Hedger and Lyle Devore shared the stage with a talk about two people who played a huge roll in Lyle’s career as a track promoter, Alex Friesen and C. J. Richards. Lyle shared with the audience what it was like to work with both. Lyle said he started at seven years old picking up trash at Albany Saratoga and for him it meant he would get a ticket for next week’s show. When Lyle was asked in school what he wanted to do when he got out of school his answer was always, “I want to run a race track. I’m living my dream,” said Devore. Lyle also spoke of the two that help him with all he has on his plate, Marcy and her daughter, Mia. When asked what he thought of Brett Deyo taking over Fonda he said, “I love this sport and I want no race track to close. Time will tell how it goes.” Lyle said you can not let the show get stale and said he is always looking for new ideas and is open to them.

Last but certainly not least was C. D. Coville who always has a way to enlighten the audience. When Ron asked him how he got into racing he replied, “through the pit gate.” C. D. wanted to let everyone know the night he went out of Lebanon Valley he did not drive back onto the track because he had a broken steering arm. He said the car was put back together and loaded in the trailer for a race the following night where he finished third.
During the day we had the time to meet the granddaughter of the 1958 Lebanon Valley Champion, Jimmy Markle, Denise who is one young lady that cares about the history of our sport. We had a great time chatting with her and just like her grandfather, she was a pleasure to talk with.

News continues to come from Fonda Speedway and the 2019 schedule is now posted on the website. Several special nights are on tap at the track during the season and we look forward to seeing what the new promoter will have out next. Albany Saratoga has their Nostalgia Night scheduled for Friday, August 16th.

In closing we send our condolences to the family of Walt Cross, who passed away on November 13th. Walt worked as tech inspector at Albany Saratoga for many years.