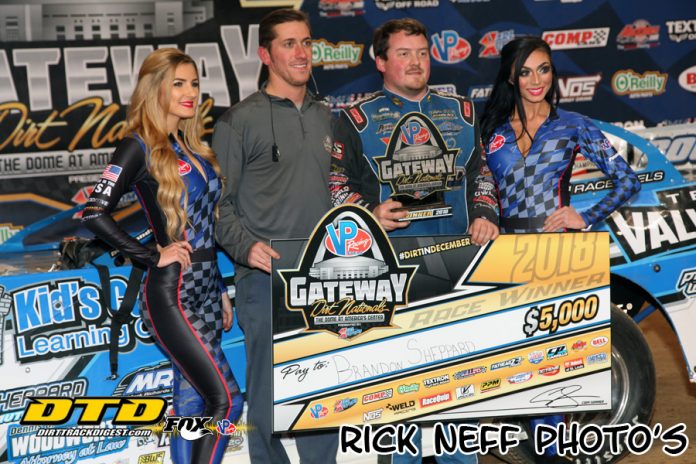 ST. LOUIS, MO – Brandon Sheppard and Bobby Pierce added their names to the record books on Friday night by picking up preliminary night victories in each of their 20 lap, $5,000 to win late model main events.

In the first feature, it was Brandon Sheppard and Jonathan Davenport who lead the field to the green, with Sheppard jumping out to the early lead.  It looked like it was going to be a run away for the New Berlin, IL pilot as he was off and cruising until he hit lapped traffic, which allowed the Sweetner’s Plus 39 of Tim McCreadie to close in.

McCreadie showed the nose on the low side of the speedway and looked to have position going into turn three to take the lead away from Sheppard, but the yellow flag flew just as McCreadie was about to make the pass, relegating McCreadie back to the second spot.

With only 9 laps to go when the cars restarted, and no chance to hit lapped traffic again Sheppard drove away from the McCreadie machine and picked up the win.  McCreadie came home in second, with Jason Welshan and Billy Moyer locking themselves into Saturday’s $30,000 finale.

In the nightcap, it was Bobby Pierce who picked up his second win in as many years at the VP Gateway Dirt Nationals.  Pierce inherited the lead after leader Shannon Babb ended up in the turn two fence and never looked back, claiming the $5,000 top prize.  Don O’Neal, who is driving his son Hudson’s 71 mount, came home in second, with Chad Zobrist and Jeff Herzog competing the top four.


Perennial favorite Scott Bloomquist had a tough night.  Issues in his time trial forced him to the rear of his heat and he was unable to transfer, starting at the back of one of the B-Mains.  Unfortunately his night didn’t get any better as he was caught up in an early wreck in his consolation and was forced pitside.