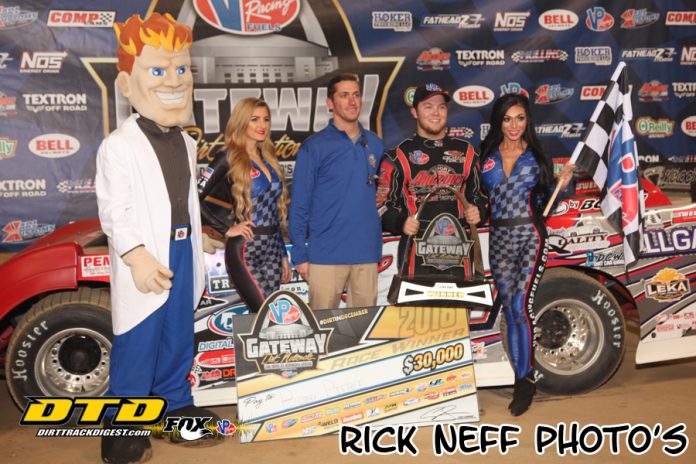 ST. LOUIS, MO – Bobby Pierce started on the pole, jumped out to the early lead, and was never challenged on his way to winning his second consecutive Gateway Dirt Nationals Late Model main event.

“Mr. Smooth” Billy Moyer was able to move past front row started Don O’Neal on lap seven but behind the top five drivers, Shannon Babb and Brandon Sheppard were waging war on the top side of the speedway.  With those two drivers the only ones able to make the top side work, they made their way to the front.  Unfortunately for the duo Sheppard’s night ended early with a right rear flat tire, and Babb was relegated to a 15th place finish after being forced to make multiple stops for damage to his race car. and and

Moyer attempted to chase down Pierce as the 40 lap race wound down, however each time the leader found lapped traffic a yellow flag would fly, giving the “Smooth Operator” a clean race track in front of him.

With a clean race track in front of him, no one had anything for Pierce, as he collected his second win at the VP Gateway Dirt Nationals over Billy Moyer, Don O’Neal, Jason Welshan and Ryan Unzicker.

NY native Tim McCreadie had a rough night after redrawing the 5th position for the feature.  McCreadie was involved in a tangle on lap two when Jeff Herzog got too sideways in the turn and collected the Sweetner’s Plus 39 machine, among others.  McCreadie was able to continue for a few more laps, but drew another caution when he came to a stop on the outside of turn 2 and took his Longhorn chassis pitsite.

The driver introductions at the Edward Jones Dome have become a must-see event in themselves.  Last year Jason Welshan was introduced along with a sign that said “Scott Who?” in reference to the driver known as “Black Sunshine” Scott Bloomquist.  This year, Bloomquist was not to be outdone.  His introduction involved bringing fellow racer and competitor in the midget division Rico Abreu out on his shoulders.