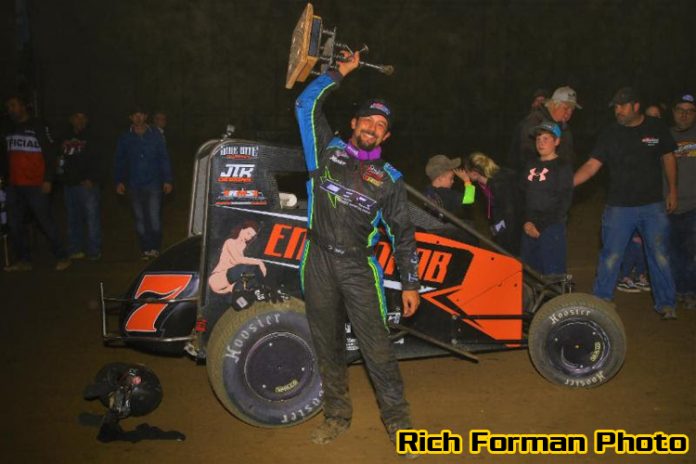 DU QUOIN, IL – Thomas Meseraull doesn’t waste any time getting up to speed when he lands a new ride. And when he gets up to speed in that new ride, it’s a foregone conclusion it’s going to occur in spectacular fashion.

That thread continued Saturday night as the San Jose, California native jumped into the seat of the RMS LLC No. 7 for the first time and drove it straight to victory lane following a stirring battle with C.J. Leary in the fourth annual “Junior Knepper 55” at the Southern Illinois Center in Du Quoin.

He was tabbed to drive another car in this event until a handful of weeks ago when those plans were altered and Meseraull had to find new digs for the indoor racing season. A phone call later and the pieces of the puzzle started to come together, putting Meseraull in the right place at the right time.

“Funny story,” Meseraull began. “I was going to run Rusty Kunz’s car like I did last year, and it was going to be Joe Dooling’s motor. When Joe sold everything, I lost my ride. Three days later, I called (Crew Chief) Donnie Gentry, who was wrenching on these cars. (The team) actually bought a (Dooling No. 63) car two weeks ago and bought a motor from Clauson and put it together. That’s a brand-new car that Rusty Kunz built.”


Like unwrapping a new shiny toy on Christmas morning, Meseraull’s ride was fast right out of the box on Saturday night where he raced from 8th to 3rd in his heat race and 4th to 1st in his qualifier, putting him on the outside of the front row alongside defending race winner Christopher Bell.

Bell starting from the pole in a midget looks like a death knell for the competition on paper, and he backed that notion up by jumping out to the lead right from the dawn of the 55-lapper. However, Meseraull was right on Bell’s tracks, albeit a lane higher while Bell hugged the inner berm.

By lap 10, lapped traffic had already come to fruition, forcing Bell off the bottom and up a couple lanes to rip around the freight train on the low line. A yellow on the 16th lap settled the nerves for a moment and calmed the waves of traffic for the ensuing restart, when Meseraull slipped a bit high between turns three and four as Bell scurried away to a two-plus second advantage and appeared to be in total control and on his way to becoming the first two-time winner of the event.

Just prior to midway, on lap 26, a commotion in turn three involving McKenna Haase, Dillon Welch and Brian Shirley took all three out of the race. Moments later, once again, Bell left a vapor trail in the thick air as he jetted away to his best restart all night. However, Bell began to slow exiting turn two with an apparent fuel line issue, eventually coming to rest in turn four to put an early and shocking conclusion to his night.

Now, it had become a brand-new race. Meseraull led the early stages of the latter half of the deal until Leary went on the attack along with the lapped car of Justin Grant, making it a three-way tug-of-war with a battle for the lead and a lead-lap situation occurring simultaneously. Leary was able to clear Meseraull on lap 32, setting off a chain of sliders between the two on both ends of the racetrack that saw an official change of position six times at the stripe, but double that when taking into account all the times each countered the other’s move on the dirt track chess board.

Every time Meseraull saw his lead slip away for a moment following a Leary slider, Meseraull was already lining up his next move, angling his car to the bottom of the entry to the corner to slip in front of Leary. Rinse and repeat, déjà vu, time and time again to the delight of the large Southern Illinois crowd on hand.

“This place, a lot of the time, is either on the top or the bottom,” Meseraull explained. “The top started going away and Leary showed his nose. On restarts, you’re just open because it bunches everybody up. We started going back and forth and you just start pulling all the tricks out of your bag. Like throw a slider, block a slider, get slid, turn up underneath them, run ’em out of room, get down to the end of the corner to make him mess up.”

“When I got to racing with Leary, you just go to go where he’s not. Period,” Meseraull continued. “They go low, you go high. They go high, you go low. He goes in high, he rolled the bottom, and was pretty good. I drove back by him off of two on the bottom, hit my marks and, at that point, I knew maybe that’s where I needed to go. Fortunately, at this place, you can see your crew guys and they can tell you to go to the bottom. At this point, you know they’ve got to be really good to drive around the outside of you here, so that’s just what I did.”

On lap 41, that one little slip up occurred as Leary followed Meseraull on the bottom of turn three. A very subtle nudge between the front bumper of Leary and the rear bumper of Meseraull sent Leary into a spin in turn four, stopping him in his tracks and putting a cap on his bid for victory.

With 14 laps remaining, Meseraull had control and never let it from his grasp as he maneuvered to the bottom of the racetrack, tip-toeing around the berm as he constructed a lead in excess of three seconds. Only a handful of lappers were on the path of Meseraull’s march toward victory, but they were handled with ease as he cruised to a 3.814 second victory over Jake Neuman, Derek Hagar, Trey Marcham and Kevin Thomas, Jr.

The victory was Meseraull’s first win on the USAC National Midget calendar since a 2004 score on the pavement at California’s Irwindale Speedway. Ironically, like his win Saturday night, that race also happened to be a non-points “Special Event.”