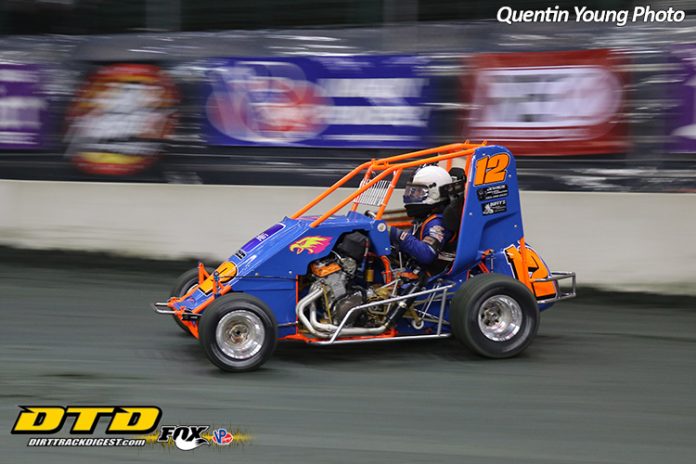 If a driver was to describe to you his perfect weekend it would be to start upfront each race and lead every lap on the way to victory. It very rarely ever happens but for Erick Rudolph this weekend in Trenton, N.J., it was a dream come true as he claimed the $5,000 first place prize winning the feature event on Saturday night in the 600cc division at the Cure Insurance Arena as part of the East Coast Dirt Nationals.

Rudolph started off on Thursday night by drawing the pole starting spot for his heat race and in his qualifier race.  He went on to win each race locking him into Saturday’s A-Main. Rudolph’s good fortune continued on Saturday as he drew the pole for the big race.

When the race went green, Rudolph left no doubt who the driver to beat was on Saturday night as he took the lead right from the start and went on to lead all 50 laps on the way to the win. For Rudolph it was his fourth victory in five starts in the Trenton N.J., arena but his first on the dirt surface. Rudolph did not race in last years East Coast Dirt Nationals.

“This race is probably the most prestigious race in Pennsylvania, New Jersey and Delaware for the 600 class and it’s really cool to be able to say we’ve won it,” said a very elated Rudolph standing next to his car in victory lane. “It was a testament to this car.  It was so easy to drive all weekend. We really didn’t have to do anything, the car did an awesome job and it was really spot on. The engine pulled down the straightaway like nobody’s business and the shock package that Tim (Buckwalter) put on the car was perfect. It would really stick in the corners and it gave me the ability to get a good launch coming off the corners and down the straights.”

It was apparent that the Fraschetta Racing No. 12 was the car to beat all weekend, but Rudolph’s charge to victory didn’t come without some challenges. Kyle Spence made some noise early on as he challenged Rudolph on the outside but the Ransomville, N.Y., driver stuck to his game plan and never wavered off the bottom groove and came out ahead through each challenge.

The middle of the race was all Rudolph as he easily maintained his lead through numerous cautions and lapped traffic. Billy Pauch Jr., mounted up a challenge in the last five laps but Rudolph never flinched and stayed glued to the very bottom not allowing Pauch Jr., to make a move despite numerous taps to his back bumper.

“I honestly didn’t know it was Billy behind me there at the end,” mentioned Rudolph. “I just tried to keep a level head. I like things to be a lot easier than that but that’s what makes racing great.”

Lapped traffic often comes into play on tracks this small in size, but do to the numerous yellow flags throughout the race Rudolph only had to deal with lapped cars sporadically. Surprisingly Rudolph was disappointed with the lack of that fact.

“With the way I was running the track I don’t think it really mattered,” explained Rudolph. “I was actually happy to see some lapped cars because I was able to cut right thru like nothing and I think I was able to open up my lead more.”

Ironically, with the plethora of talent in the 600cc division in our area it was two of the best Dirt Modified drivers sweeping the top two spots in main event.

“He’s a helluva driver in this region,“ explained Rudolph referring to Pauch Jr. “It’s very rare that he comes up into the Central New York.  It’s a pleasure having him up there and he’s a class act and I’m sure he”ll do great again this year.”

Pauch Jr., himself chimed in on the subject. “We (Erick and I) have a good time together. We don’t a lot together but we get along and it’s kind of weird if you think about it that of all these local drivers that two dirt modified guys came out on top in this deal. It’s kind of a testament, people overlook dirt modified drivers in the Northeast in my opinion. We’re a strong group of racers and it’s kind of cool.”

It was a hometown race for the driver known as the Kids Kid and Pauch Jr., would’ve liked nothing better than to take the winners trophy 30 minutes up the road to Frenchtown, N.J.

Starting ninth on the field Pauch steadily worked his way to the front and into the second spot about halfway through the race. With restarts so crucial late in the race being on the outside was not the preferred spot to be and Pauch Jr fell back to third after one restart when third place finisher Brett Altemose squeezed by to take the runner up spot. Pauch Jr., returned the favor on the next restart and immediately began to put pressure on Rudolph for the lead. Unfortunately for Pauch Jr by that time the track was only one lane on the bottom and there was no way Rudolph was coming the rail.

Pauch Jr., tried every trick in the book to get Rudolph to come off the bottom but to no avail having to settle for a second place finish in last race of 2018.

“It just got way to slick at the end there,” explained Pauch as I talked to him right after the race. “Erick’s one of the best short track drivers there is and I knew he wasn’t going to make a mistake. We did the best we could but just couldn’t get around him. It’s a shame, up to lap twenty it looked like it was going to be a phenomenal race and then it just went away. We’re happy, we’ll end the year with a second and start looking towards 2019.”