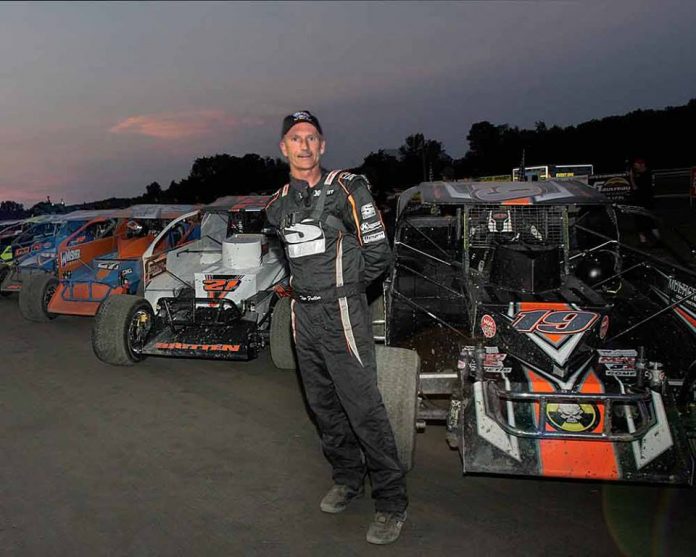 After 28 years of racing, Tim Fuller has pretty much seen it all, from running in the top league of the World of Outlaw Late model right down to his humble begins racing at Evans Mills Speedway in the Pure Stock Class. Tim Fuller has been exposed to the racing world all of his life. Going back to the early sixties, the Fuller family and uncle Keith Fuller, raced mostly at the Watertown and Fort Covington Speedways. Tim’s father, Wayne, also got his feet wet in the racing world at Evans Mills Speedway.

It has been said that one of the defining moments for Tim Fuller to steer him towards a career in racing came when Bob “Barefoot ” McCreadie gave young Tim a ride on the back portion of his car and, after a few laps, Tim was hooked. Forty-three years later, Tim is still following this dream and in 2018 he had one of his more successful seasons.


A weekly racer at his home track of the Mohawk International Raceway, Tim clearly showed his talent as a driver in 2018 by winning the Track Championship along with setting a new track record for a single season of wins.

During the Mohawk Nationals, held annually in mid-September, Tim won his ninth feature on the Friday night’s portion of the event, breaking Pat O’Brien’s record of eight feature wins set 26 years ago. Tim followed that up by winning Saturday’s 100-lap Big Block Super DIRTcar Series event, bringing his total win in one season to 10, a record that should stand the test of time.

Fuller also campaigned weekly at the Fonda Speedway, one of the toughest tracks in the Northeast. The competition is always high with the like of Stewart Friesen, Jeremy Wilder, and Bobby Varin, however, Fuller managed to pick up a win along with five top-five finishes.

In some special events held throughout the season, Tim picked up a win at the Cornwall Motor Speedway and Can-Am Speedway. In the Super DIRTcar Big Block series, the season started off with some disappointing results. However, late in the season, Tim picked up 3 wins. His first win was at the Mohawk International Raceway Nationals 100 and a week later, he won the Jake 100-Lap race at the Fonda Speedway. The biggest win was at the World Finals in Charlotte, North Carolina, where Tim drove as the best in the business.

Overall for Tim Fuller and his long-time crewman of 20 years, Daniel Jodoin, this was a rejuvenating season for this small team. With 15 wins and numerous top-five finishes, this was his best showing in a number of years for this veteran driver. I was fortunate to witness over 25 of Tim’s races this past season and clearly saw how good a driver he can be on any given night.

With the wind in his sail, as the saying goes, Tim’s early plans are to return to the Mohawk Intentional Raceway to defend his Track Championship title and hopes he can carry some of this year’s momentum into the 2019 season.

Tim wishes to thank G&R, Auto Parts and St Lawrence Radiology – without these racing sponsors, this high caliber racing would not be possible.