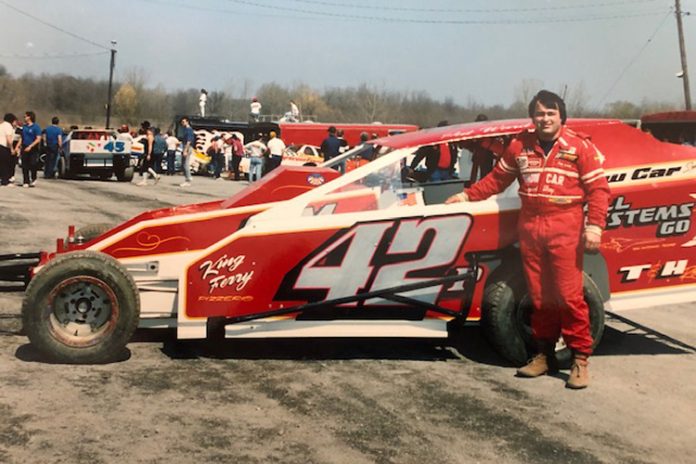 The latest announcement from Fonda Speedway on their Facebook page is “Fonda Speedway is NOT requiring the fire bottle in 2019 for any division. It is purely optional for teams and there will not be a weight break for those choosing to use it.”

There no doubt was prompted by the announcement earlier from DIRTcar that it will be required that Late Models, Super DIRTcar Series, Big Block Modifieds, and 358 Modifieds be We attended the DKM Christmas Party at Checkers Out in Johnstown on Saturday along with several racers and fans who also came to celebrate with the DKM Fabrication crew of Eric Mack, Dave Constantino and Kyle Hoffman. DKM Fabrication and their Cyclone Chassis have gained popularity with many local race teams and also many others across the country. On Saturday there was food, drink and racing for all to enjoy. One former driver that is still very popular with any racing crowd is C. D. Coville and Saturday he drew a crowd with stories of his racing career. Here he is with Dick Hoffman, Randy and Travis Colegrove, Rich and Ed Biittig. Stewart and Jessica Friesen were on hand with son Parker who just celebrated his third birthday and was getting a driving lesson from dad.


Dave Constantino will be behind the wheel of a new DKM Modified for Laudy Hoyenga in 2019 filling the spot left empty when Shaun Pangman retired at the end of last season. Constantino is one of the partners at DKM Fabrication and the car will get its power from a John Grant small block engine.

The New York State Stock Car Association has announced their Hall of Fame picks for the class of 2019. Car owner Jerry Rose fielded cars for a number of high profile drivers, among them Brian Ross, Pete Corey, Eddie Pieniezak and Lou Lazzaro. Rose was also a master mechanic who fielded cars for some 18 drivers over a career that lasted from the late 1960’s through 1985.

Of the three drivers picked, Gary Iulg is the only one who has retired. He joins the 2019 class along with Curt Van Pelt and Pat Ward, both who are still very competitive. Van Pelt began his career at Woodhull Raceway in 1977 in the Hooligans/Late Models, moved to Modifieds in 1982 and was a hired gun in the Sherwood No. 11JR by 1987. Curt has 135 wins to his credit, eight track titles and the Mr. DIRT Championship. Gary Iulg was equally as good on asphalt as he was on dirt. He won at Ransomville and Merrittville on the Niagara frontier and Iulg was the ’75 and ’76 Ransomville champion. He won on dirt at the Syracuse Mile, Rolling Wheels, in Florida at East Bay and Volusia and on asphalt at Lancaster and Oswego and several other dirt and asphalt venues throughout New York State.

Pat Ward has been synonymous with the red No. 42 Modified forever. His career started in 1975 and for many years, Pat fielded his own car with the assistance of his father, Bud, before moving on to the Gypsum Express Team of John Wight, where he continues to be a steady winner and top-five competitor in the familiar No. 42. He was a regular at Fonda for a few seasons and has 23 wins there along with 14 at Brewerton, 18 at Weedsport, 22 at Fulton, six at Canandaigua, five at Five Mile Point and four at Rolling Wheels. Major Ward wins include the Outlaw 200 at Fulton in 2012, the NY State Fair classic in 1998 and an ROC series score at Selinsgrove, PA.

Ward won consecutive Race of Champions series championships in 2007, ’08 and ’09 to go along with the overall Mr DIRT 358 title in 2004. His resume also includes a pair of Utica-Rome championships and single titles at Fulton and Can Am Speedway.

Rose, Ward, Iulg and Van Pelt will be formally inducted in a ceremony at the Saratoga Automobile Museum on Saturday, February 23, 2019 at 11 am, with the public invited to attend and interact with the Hall of Famers. The museum’s Racing in New York gallery houses the permanent NYSSCA Hall of Fame display. That evening, the annual NYSSCA awards banquet will be held at the Polish Community Center on Washington Avenue Extension in Albany from 4:30 pm.

In other racing news, long time (52 years) Lebanon Valley employee, Bobby Waters announced his retirement this past week on Facebook. Waters is the very familiar face at the pit sign in window at The Valley and will be greatly missed by all who knew him. He has been going through some serious medical issues that has required time consuming treatments and is currently on oxygen and being at the race track would be near impossible. We wish him well in his recovery and know that everyone at Lebanon Valley we miss him dearly.

Until next time we wish all of our readers a Merry Christmas and Happy Holidays. Please send all news and/or comments to biittig@yahoo.com