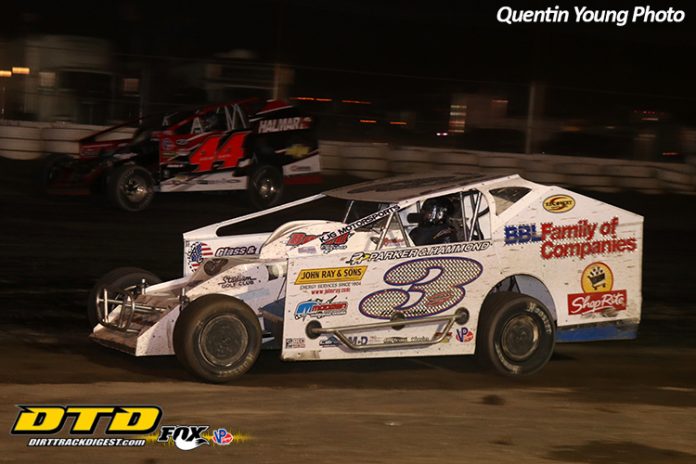 FONDA, NY – As the John Denver song says, ‘It feels good to be back home again.’

For the BBL Racing team and driver Brian Gleason, ‘home’ is Fonda Speedway and in 2019, they’ll be back in their comfort zone. Gleason will race regularly in Fonda’s Sunoco Modified division this season for the first time in more than three years, marking a return to the ‘Track of Champions’ by the popular BBL team.

“Fonda has always been home,” Gleason said honestly. “It’s always been the favorite place for me to go as a spectator or a driver. There’s something different about pulling in there; something about going over the bridge, all the people behind the grandstands tailgating. Fonda’s got a different feel.”

Gleason, 24, will forego Friday night action and put his full focus on Saturdays at Fonda in ‘19 piloting a brand-new No. 3G DKM chassis with 360 cubic inch small-block power from Dan Bedell.

While Gleason hasn’t run Fonda on a regular basis since ’15, he feels ready for a return to the half-mile oval.


“I feel more comfortable at Fonda, more solid,” offered Gleason, an Assistant Project Manager for BBL. “I’m confident in the setup I am bringing there. I have a different perspective going there.”

Gleason is looking forward to the upcoming season at Fonda with American Racer tires on the cars and engine rules allowing for big- and small-block combinations.

“I’m looking forward to running American Racer tires,” Gleason said, reflecting on the success achieved by his mentor and teammate Matt DeLorenzo during the Ric Lucia promotional era at Fonda under a similar rules package. “The majority of Matt’s success at Fonda came with a small-block and American Racers.

“The compounds that are being run this year are the same as what we ran back then. Prep wise, I know what to do.”

The opportunity to pilot a small-block was equally appealing.

Gleason looks to put his name on the Fonda win list after several strong runs in the past.

“I’ve had more consistent runs there,” he said. “I have four second-place finishes just to Stew (Friesen) alone.”

Gleason will be able to draw knowledge from DeLorenzo, the 2007 Modified champion and two-time 358-Modified titlist with 37 career Fonda victories. Like Gleason, DeLorenzo – who promoted the speedway for a pair of seasons (‘14 & ‘15) – has been absent on Saturday nights for the last three years.

That will change in ’19. While he won’t be a point chaser, look for ‘Matty D’ to compete on a semi-regular basis at Fonda this year.

The upcoming season brings a fresh perspective for Gleason, who moved into a new home in Glenville, N.Y., this past March.

“Racing at Fonda will be a nice change of pace,” he said. “Fridays are kind of hard for all of us to get ready for – personally and with work.”

Then, there’s the track itself – and a history of weekly racing that dates back to 1953.

“I like the character of the place,” he said. “No matter the surface, the weather, racing is always close and competitive at Fonda. It’s got a ‘short-track’ feel on a big track. Fonda creates races that are unpredictable. There’s just something different about it.

“The place is so historic. You know you’re making history every time you go there. You’re part of it.”

For Gleason’s team and supporters, there is a widespread enthusiasm about the change of plans.