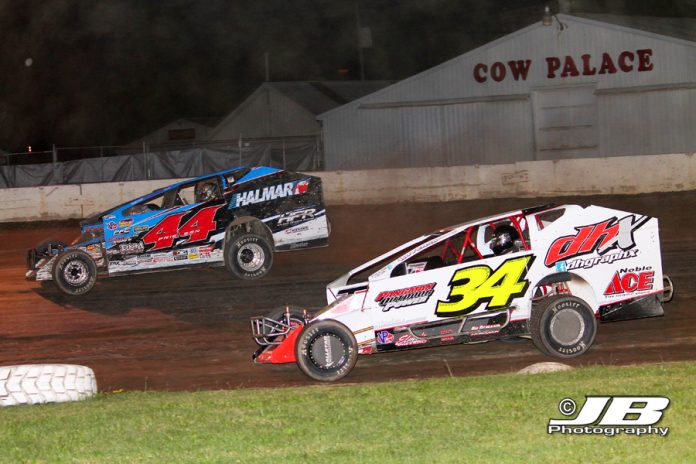 FONDA, NY – There’s a buzz around legendary Fonda Speedway for 2019 as change is in the air with a new management team, new name for the Sunoco-sponsored Modified division and a more relaxed rules package in the headline class.

With that said, fans and race teams are gearing up for Opening Night at the ‘Track of Champions’ on Saturday, April 20.

Laudy Hoyenga’s Sloansville, N.Y.-based race team will field two cars in the Sunoco Modified division this season: one for Cody Bleau, who has shown promise since joining the Mod ranks a year ago, and a second to be piloted by Sportsman hotshoe Dave Constantino, returning to the Modified wars regularly for the first time since 2009.

The 37-year-old Constantino was a two-time winner at Fonda in the Crate 602 Sportsman division last season, while dominating the action at nearby Glen Ridge Motorsports Park in Fultonville, N.Y., where he earned 10 checkered flags.

Constantino – who with partners Kyle Hoffman and Eric Mack founded the growing DKM Chassis enterprise – will look to add his name to the elusive list of Fonda Modified winners this season aboard a Hoyenga Racing No. 34.


Hoyenga came to DKM in search of a driver after Shaun Pangman opted to take a break from the sport. He found the replacement he wanted in Constantino.

Constantino’s ride, of course, will be a DKM chassis. The team plans to utilize a freshly built 360 cubic inch small-block engine, a program that is budget-friendly thanks to the ’19 rules package.

“I was able to build a new, competitive small-block very affordably,” Constantino said. “I didn’t have to spend $50,000 to move up. I think a lot of people up here are realizing that. You can only go so fast at Fonda by feature time. I think we’ll have the right combination.”

“I’d like to win some races for him,” he bottom-lined.

Bleau, like Constantino, boasts a successful Sportsman career including the Fonda track title in the ’12 season. The 27-year-old North Greenbush, N.Y., driver made the transition into the Modified ranks last season and earned a pair of third-place finishes and a sixth-place result in the final standings.

“Jumping from the Sportsman to a Modified is like starting all over again,” Bleau said. “It’s all about knowledge and what you can learn. The biggest thing is throttle control. You never know everything. You learn something every year.”

It was Pangman who opened the door for Bleau to advance to the Modified wars in Hoyenga’s equipment.

“A seat opened up in one of the cars and Laudy let me run the 358 car one night,” Bleau said. “Two weeks later, I drove the big-block car because Shaun (Pangman) was on vacation. I ended up leading 12 laps in my third Modified start.”

Bleau is a hands-on driver and frequently makes the drive to Hoyenga’s shop to wrench on his ride.

“I try to keep a positive, clean reputation,” he said. “I love to learn about the adjustments, setups and experiment.”

Like Constantino, Bleau will be utilizing a DKM chassis at Fonda. He will lean on his new teammate for valuable setup help.

“I’ve raced against Dave and have gotten to know him over the years,” Bleau said. “Having those (DKM) guys around will be a big help.”

Aside from weekly racing at Fonda, Bleau will race in many of the Modified specials planned for Glen Ridge in ’19 as well.

“I’m always looking for more seat time,” he said. “I like to race as much as I can.”