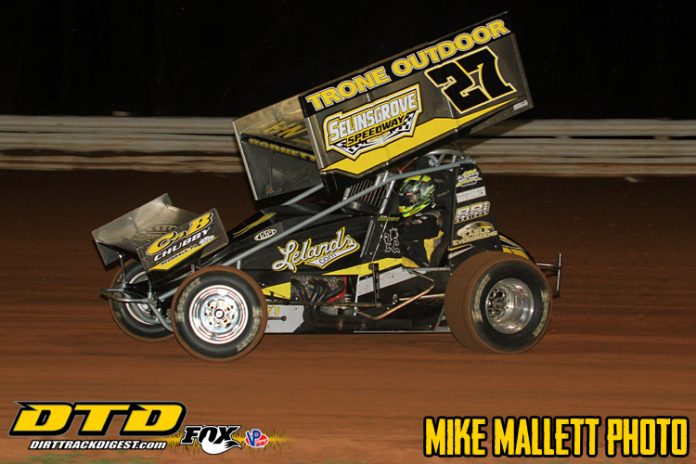 Retiring a number is most often reserved for all-time greats. Other times, it’s a tribute to an icon whose career was cut short.

Greg Hodnett, sprint car icon, was 49 when he lost his life in a crash at BAPS Motor Speedway in late September.

Hodnett had a lustrous career driving several car numbers during his time, but his last number he ever drove was the No.27 owned by Mike Heffner and Heffner Racing Enterprises.

“It’s not any more special than any of the other numbers Greg drove but it’s the last number,” said Heffner. “Anyone currently using the number it doesn’t affect but here on out, the number 27 will be retired not only by our team but all of Central Pennsylvania’s 410 tracks. We’re doing this in honor of Greg.”

“I think it’s a special thing,” Heffner said. “Knowing that we’re recognizing the greatness and efforts of Greg by retiring his number is an honor to remember him forever. We will always remember Greg but it’s important that the following generations also hear about him, learn about him and realize what he stood for.”

Hodnett was well spoken, he was personable, and he was unselfish. He was the driver all tracks wanted to represent the sport.

“There’s not a more deserving person to retire a number than for Greg,” added Port Royal Speedway’s Promoter, Steve O’Neal. “Greg represented the sport so well. He was likable by his peers, but also from the guys like myself who run the track. I think fans, promoters, and drivers alike appreciated all that he was. He always held himself at a high standard. I know for me and for other people, he was our Dale Earnhardt. This is so deserving to forever keep his name alive.”

Hodnett had a way with people and promoters. When an issue came up in the sport, he always put himself second. His opinion was for the greater good of sprint car racing.

“He was there every Saturday night,” O’Neal said. “He worried about tracks. He was one of the few. If it were bad weather, he’d call concerned for us. He actually cared about our well-being. That always stood out to me. A lot of people care about themselves, but he cared about the sport.”

Hodnett had the ability to see both sides of a situation, which made him so endearing as a professional. He understood what tracks and businesses went through, as well as the finances of teams and owners.

“Williams Grove feels retiring a drivers’ car number is often reserved for exceptional drivers and other times it’s a tribute to a driver whose career is cut short because of illness or death,” said Williams Grove Speedways promoter, Justin Loh. “In this situation it is both. The number 27 is the symbol of a winner and we are honored to be a part of retiring the number 27 along with the other local speedways.”

Hodnett had a Hall of Fame career that featured over 250 wins, 20 of which came against the World of Outlaws. There were track championships — five came at Williams Grove Speedway — and five Speed Week titles, the last of which came this past season.

If there was big money on the line, Hodnett was always near the front. He captured the prestigious Williams Grove National Open, the Tuscarora 50 and Selinsgrove National Open multiple times, had wins at Eldora Speedway and The Dirt Track at Charlotte, and sat in Victory Lane this year at Knoxville Raceway during the Knoxville Nationals.

The No.27 will now be retired across Central Pennsylvania to help keep Hodnett’s legacy alive for decades to come.