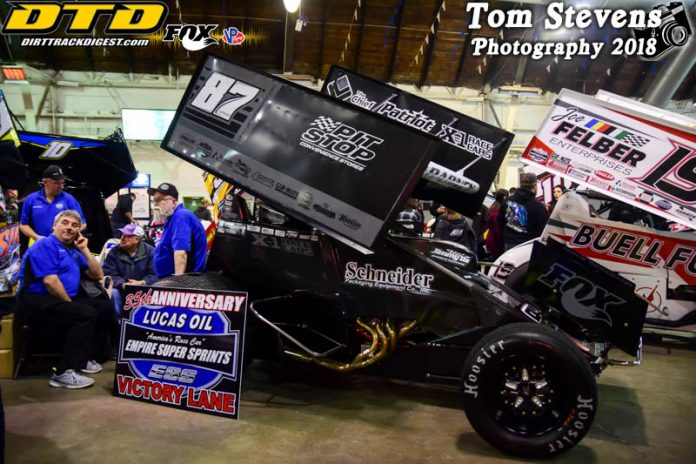 SYRACUSE, NY – Mark down the dates of March 9th and 10th as the 33rd Annual Syracuse Motorsports Exposition and Trade Show once again will be held at the Center of Progress Building located on the New York State Fairgrounds.

Trade Show Promoter Jeremie Corcoran showcased his first effort in 2018 after many successful years by the Patrick Family and the show didn’t miss a beat. The event was sold out from corner to corner.

On display were dirt and asphalt modifieds, sprint cars, sportsman, micro sprints, pro stocks, go-carts, dragsters and so much more. Local dirt and asphalt tracks were also well represented and fans can expect exciting displays from go-cart tracks and dragways this year.

“I went into last year hoping to carry on the tradition that the Patrick Family built up and I think everyone had a good time,” said Corcoran on last year’s show, “I can’t thank everyone enough for making it a tremendous event. From the race tracks, sanctioning bodies to the cars and especially the fans. We will try like heck to make it even bigger.”


Set up will be all day Friday with the show scheduled to be open on Saturday from 10AM – 8PM and on Sunday from 11AM-4PM.

Fans will be treated to seeing all the new cars from their favorite stars, tracks and sanctions will debut their new 2019 schedules and merchandise and so much more. Admission prices are set at Adults $13, Kids 6-12 $5 with 5 and under FREE. We will also have a special weekend Adult price of $20.

The Center of Progress Building is the site, March 9th & 10th are the dates, it’s 33 consecutive years of entertainment. The Syracuse Motorsports Expo, come and be part of the excitement.