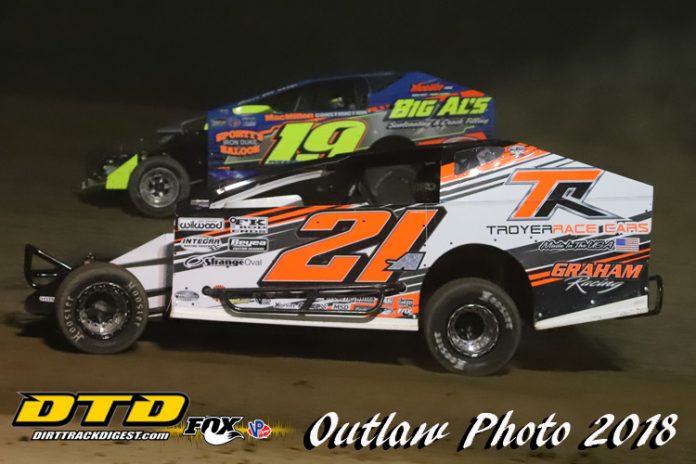 Peter Britten, coming off the best season of his career, will return to Albany-Saratoga Speedway on a weekly basis for 2019.

Britten, the native of Brisbane, Queensland, Australia, won the 2017 modified point championship at the historic Malta track driving for Andy Romano, but back issues midway through the 2018 season prevented him from making a proper defense of his crown.

“I wasn’t happy with the way things finished for us at Malta last year,” said Britten. “I feel like I’ve got a little unfinished business. I’m looking forward to coming back and competing for another championship.”


Britten put Romano’s 97 in victory lane on May 11 last year, but he would only compete for another two weeks before having to take time off because of back problems. Romano used a couple of substitute drivers while waiting for Britten to recover, but when it looked like the rehab was going to take more time than expected, Romano sold his equipment

When healthy again, Britten teamed up with car owner Ray Graham for a very successful assault on Super DIRT Week at Oswego Speedway. Britten made history when he won the Camping World 150 for 358 modifieds, becoming the first Australian driver to take the checkered flag in that event, and he followed that up with a third-place finish in the Billy Whittaker 200 for big blocks.

But recently, Britten announced he and Graham were splitting up for the 2019 season, and he’ll be fielding his own team at Albany-Saratoga. As usual, he’ll be behind the wheel of a Troyer chassis.

Despite having options of running closer to his Weedsport home, Britten can’t wait to get back to Albany-Saratoga Speedway.

“It wasn’t a hard decision,” he said. “I really enjoy racing at Malta, and it’s one of those tracks that still has a buzz about it. It has a great atmosphere.”

Britten won three Australian V8 modified championships before making the move to the United States. He began as a crew chief for Rich Scagliotta in 2009, and started competing fulltime as a driver the next season.

He became a Friday night regular at Albany-Saratoga Speedway in 2013, driving the Jerry Darrah-owned 14B, and picked up his first career win on June 21. He won two more features in 2014, and finished second in points (with one victory) to Brett Hearn in 2015.

Britten won the opening race of the season at Albany-Saratoga Speedway in 2016 before spending the rest of the season campaigning in Central New York for owner Al Heinke of HBR Racing.

After Heinke and Britten split at the end of the 2016 season, Britten hooked up with Romano for 2017 and won the first track championship of his career.

In essence, Albany-Saratoga Speedway is Britten’s home track. During his time in the United States, he’s been in victory lane at Malta eight times, the most wins he’s recorded at one track.

“Peter is the whole package,” said Albany-Saratoga Speedway promoter Lyle DeVore. “He’s the type of racer that any promoter would love to have at his track weekly.”