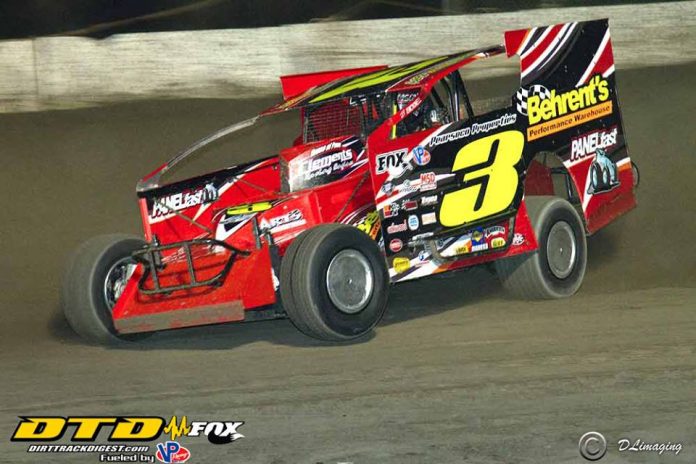 The STSS began in April of 2014 when Brett Deyo debuted the Bob Hilbert Sportswear Short Track Super Series. From that day, the series has taken off in fan popularity.

As the series grows, it has attracted some of the best dirt track drivers on the East Coast.

From the beginning, Jeff Behrent of Behrent’s Performance Warehouse has been a part of the series. Jeff explained, “My dad and I have fielded cars for the last four years on the Deyo series. It has been a fun venture as Brett really runs a great program.”


Last season proved very fruitful for the Behrent’s Race team with Mat behind the wheel of the number 3 car. I asked Jeff what led him to choose Mat as his primary driver.

“The relationship with Mat developed over time. I always talked with Mat’s father Randy and followed along with his racing. We went to Charlotte for the World Finals one year and were in the pit area hanging around Mat and his team when he was able to pick up a win there. I was so impressed how Mat and his father ran their team and how the whole group worked together. During the winter, I found out that our current driver could not follow the whole series and run for the point title, so my dad and I contacted Mat and put a deal together. The relationship has really blossomed and has grown over the last season.”

With three podium finishes last year on the Short Track Super Series, Mat was definitely in the championship hunt. Unfortunately, the team fell short of the title by a mere eight points. It was a great season all around thou for Mat in his first year of racing the Short Track Super series.

However, there were some slight problems along the way. Mat explained, “The first year was tougher than expected, racing at tracks that were all new to me,” but we got through with a third-place finish in points.”

During our conversation, it became clear that Mat is looking forward to the upcoming season as he went on to explain, “Last season was a lot of fun but I think it’ll will more so this season,” Mat went on to explain.  “It’s going to be a lot of work and a lot of time on the road but going to some of the tracks with the knowledge gained over the past few years is exciting and will definitely make it easier.”

I went on to ask Mat if the championship is in the cards for this year, especially after last seasons results. “Yes the championship is our goal; I do think that the knowledge the team has gained, along with great racing equipment will make my job a little easier than last year. That being said, there is a lot of great drivers thinking the same way who will be racing the Short Track Super Series just as hard.”

The sentiment by team owner Jeff Behrent on the upcoming season is clearly aligned with Mat in challenging for the series title and shows the team as a whole is working in unison. Jeff explains, “We are focused on winning the Short Track Super Series North title this year. All our focus will be on winning that with Mat. Without a doubt, that’s our team’s goal this year.”

This year is shaping up to be a busy one for St. Catharines, Ont., driver. Mat will race the entire Northern Short Track Super Series but has also secured driving commitments with Buzz Chew Racing team to run in the Super DIRTcar series. Williamson will also take over the over the driving duties for the CW Racing in the number 7 car on Friday nights at the Ransomville Speedway. As for his home track of Merrittville, Mat has not committed himself on running there on a weekly basis due to driving commitments for Jeff Behrent racing at Orange County Fair Speedway. The Behrent race team will campaign their No. 3 car this year at the OCFS track, which also runs on Saturdays and if the payout is as good as they as they say it is, then it makes sense for Mat to run there instead of Merrittville.

Car owner Jeff also expressed the same sentiment as it is going to be a very busy season in 2019. Jeff explains, “Biggest obstacles for this year is time. Racing gobbles up so much of that. Mat is also going to be busy racing this year so it will be interesting for sure how both of us deal with it.” By now it is clear why Jeff decided to bring Mat into the Behrent Racing Team. Last season, Mat secured three podium finishes, plus a third-place finish in the Short Track Super Series Championship. But that wasn’t all of Mat’s successes last year. Williamson captured 17, Modified wins, 19 top three  finishes along with a 358 Modified Championship at Merrittville Speedway clearly displaying that Behrent Racing made a good move in securing the driving skills of this hard-charging drive.

Moving forward this coming year of racing looks very promising for Mat and the Behrent Racing Team. With any luck, the team will fulfill their season’s goals.