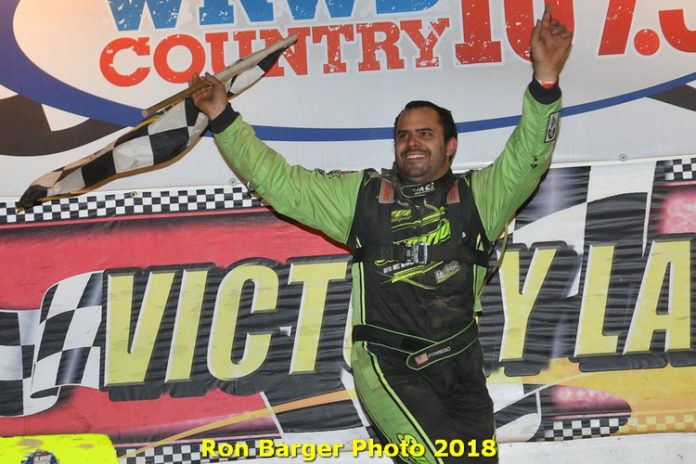 Anthony Perrego had an incredible 2018 season that included 18 victories while on his way to a Modified championship at the Orange County Fair Speedway. For the Montgomery, N.Y., driver it was a career year and one that was good enough to open up doors for the 24-year-old. The success has led to a new opportunity, one that will see him competing on the Super DIRTcar Series for car owner Ray Graham.

“I think we had a breakout year this year,” commented Perrego. “We won nine races at Middletown. That is unheard of lately. I appreciate Matt Hearn (Teo Pro Car) for everything he does behind the scenes for me and Brian Smith for giving me quality cars and pushing me in the right direction. Because of them we have a good opportunity to get into Upstate New York and race on Hoosier Tires.”

Perrego joins the Graham Racing stable as he takes over the seat vacated by Peter Britten. For Perrego, it is his first opportunity to travel north on a regular basis. He’s been a mainstay in the American Racer Tire circuits, but this new ride offers him the chance to hit the road to apply his trade with some of the best in the business while gaining more experience competing on Hoosier Tires.  He raced on Hoosier Tiers at the Orange County Fair Speedway, which was obviously a success.  Central New York will be an entirely different animal.

“It’s been a while,” said Perrego when asked about racing in Upstate New York. “The last time we did a lot of races on Hoosier Tires in Central New York was with Gary Mann. It’s tough for Brian (Smith) to get up there. We raced a lot of American Racer stuff. It’s tough to go buy 20 tires when you are racing so much on one compound. It’s going to be a little different. We run a 400 (compound) at Middletown. The track is gritty so it’s like racing on American Racers like we are used you. In Upstate New York there isn’t any tire wear. It’s all about tire prep. It will be a little different track conditions, but I think our car is going to be good enough that it won’t be that much of a factor.”


Perrego joins veteran driver Danny Johnson at Graham Racing. He is hopeful that he’ll be able to work with Johnson to help make the transition to the slicker track conditions he’ll face quicker. Johnson has spent a lifetime racing in Upstate New York with tons of success. Perrego will look to him for guidance during the season.

“You got Danny as your teammate and you know he is going to be good,” mentioned Perrego. “He’s been doing this for a long time. He’s good on those Upstate New York tracks. It will be good to maybe on lean on him a little bit and hopefully get some information out of him along the way.”

Perrego will have busy schedule with Graham as the plan is to run the entire Super DIRTcar Series with the team. He’ll also continue driving for Brian Smith on the Short Track Super Series. The team hopes to make every north region event as well as the south region which will be a combination effort with Delaware car owner Gary Simpson. This is all joined by weekly competition at the Orange County Fair Speedway.

Even though it will be his first year on the Super DIRTcar Series trail, Perrego is coming into this new opportunity with high expectations. He doesn’t just want to be competitive, he expects to win. He’s also confident that’ll he’ll be finishing near the top of the points at the conclusion of the season.

“I think a top five in points would be a good start,” mentioned Perrego. “I hope we’ll get a couple of wins. I think we are capable of doing that.”

This year there will be a bit of a learning curve for Perrego, but there is no doubt the young gun has the ability to compete on the Super DIRTcar Series. He’s set high goals and he would be a good bet to reach them.