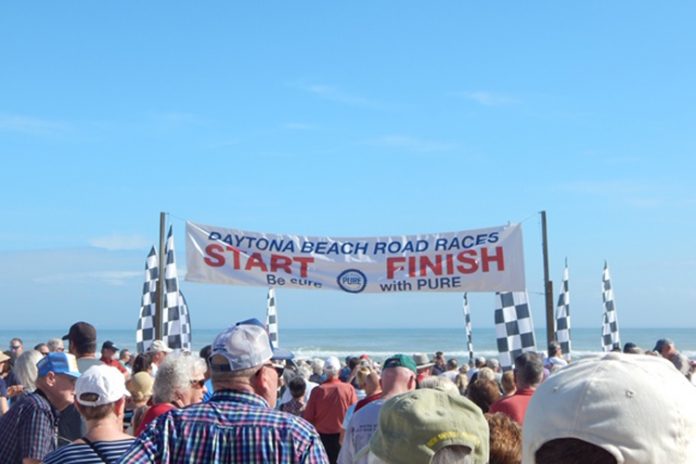 Here we are in sunny Florida happy that we are missing the storm everyone went through up north this past weekend. Also hoping that everyone stayed safe during all the plowing, snow blowing and shoveling. As we sit here in Daytona Beach news continues to come from the racing world in the Northeast. From Fonda the Lazzaro name will return to Fonda this coming season when Melissa (Mimi) Lazzaro will return to take the duties of victory lane and trackside announcer. It will be great to see a Lazzaro back on Checkerboard Square at Fonda.

In other exciting news for the Southern Tier of New York, Five Mile Point Speedway will see new life for the 2019 season. The great-grandsons of track founders, Irving and Ann Heath, Tyler, Tanner and Tucker Harpell will be taking over the speedway for 2019 and continue the track’s rich history. The Harpell brothers have grown up at the speedway so maybe this wasn’t much of a surprise. The three Harpell brothers are no strangers to working and/or racing at the track. And many Sunday nights we would see them at Utica Rome when their father Dan was doing track prep at the Vernon oval. We think it’s a great combination and we wish them well.

One very big event coming to Fonda this season besides the Fonda 200 will be on Wednesday, July 3rd when Fonda will be cast into the limelight of the racing world on national television, MAV-TV will record the “Firecracker 50”, paying $10,000 to win Modified race from the Track of Champions for broadcast. We remember the first ever televised event at Fonda when Ralph Compani was promoter, it was quite a race and those of you who weren’t there for the first one, you can be part of history in 2019.


News this week coming out of both Fonda and Glen Ridge. The first ever Montgomery County Championships between two tracks will begin when racing starts at both tracks and will include both the 602 Sportsman and Pro Stock divisions. Each division will use their eight best finished at Fonda and their eight best finishes at Glen Ridge with a combined point system being kept. Also included with be two special challenge races, one at Glen Ridge on July 6th and one at Fonda on September 14th. More information on the specifics of the challenge races, point system and championship bonus will be released at a later date. We will keep our eyes and ears out for news of this exciting development. If you are a Fonda Faithful you remember that every Memorial Day Weekend for many years the Sprint cars would come to Fonda. In 2019 the tradition continues when the Patriot Sprint Tour takes to the “Track of Champions” for the running of the Earl Halaquist Memorial. Danny Varin is a two-time defending race champion and will return to his home track to try for a three-peat.

Vintage racing will return to Glen Ridge in 2019 when the Mohawk Valley Vintage Dirt Modified Series returns on August 31st for the “Thrill on the Hill”. For those who love the vintage racers the MVVDMS will also be at Fonda this coming season.

As for our racing here in Florida this weekend is the Rolex 24 at Daytona with festivities kicking off Thursday at 9 am. This year the Rolex 24 brings drivers and also fans from all over the world to compete in what has become a premiere event for car manufactures to show off their cars. Thirteen different car brands will be represented; names like Cadillac, Nissan, BMW, Ford, Ferrari, Lamborghini, Acura, Mazda, Porsche and Chevrolet. Not only are they here to participate in the 24 hour event, each manufacturer has their own mini-dealership in the Daytona International infield. The infield is much like an amusement park all weekend including a ferris wheel. Access to all that comprises this event is very easy and inexpensive.

While in Daytona during Speed Weeks we always try to attend as many off track activities as possible sprinkled in with our racing at Volusia and the DIRTcar Nationals which is our main focus. One of our favorites in the annual Legends North Turn Beach Parade and this year it will kick off on Saturday, February 9th from the parking lot of the North Turn Restaurant a gathering place for many racers and their fans during Speed Weeks. The race cars and motorcycles of yesterday will proceed down Route A1A to the South Turn of the beach road course and continue back up the beach to the North Turn. We’ve included a couple photos of last year’s parade on the beach. The Living Legends of Auto Racing always have many off-track activities that highlight the history of the sport. Beginning Sunday, February 10 with the Beach Racing Days at the Ponce Inlet Lighthouse, then Monday, February 11, the LLOAR annual Beachside Car Show and Parade, February 12, Celebrity Auction and Autograph Session, February 13, Celebrity Meet and Greet at the Streamline Hotel (birthplace of NASCAR), and at night the 27th annual awards banquet at the Shores Resort & Spa. Being honored this year with the Tribute to the Early Years award is Sprint Car legend, Bobby Allen. February 14, Coffee with the Characters with Dave Dion at the LLOAR Museum. Friday, February 15, the 12th Annual Modified Reunion at New Smyrna Speedway.

This past Friday sad news came once again from the racing community when Wood Brother’s Racing team co-founder, Glenn Wood passed away at the age of 93. The Wood Brother’s Racing was founded in 1950 and is currently the longest continuously operating NASCAR Cup Team. One of the teams most famous drivers was David Pearson who passed November 2018. Glenn Wood and David Pearson were both NASCAR Hall of Fame members.

The DIRTcar Nationals kick off at Volusia Speedway Park on February 5th and run through February 16th. Hope to see many from up North.