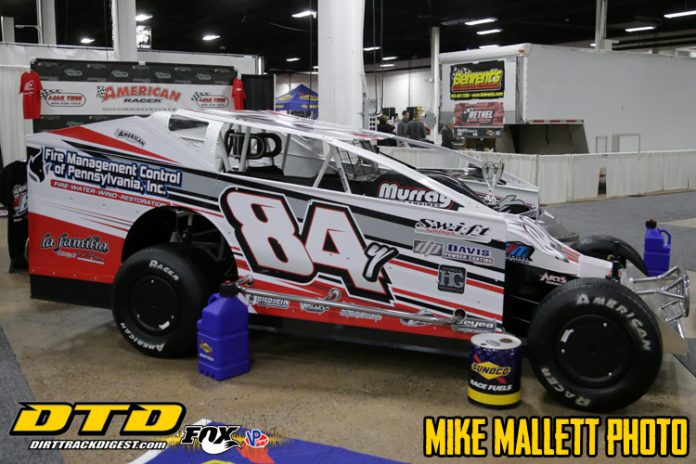 Alex Yankowski burst onto the Sportsman Modified scene last year at Georgetown Speedway in winning the Sportsman portion of the “Melvin Joseph” Memorial weekend. Yankowski started out the year on a winning note and then just kept on rolling throughout the year winning a total of 13 races along with American Racer Cup Championship for the Sportsman along with track titles at both Big Diamond Speedway and Five Mile Point Speedway.

In 2019, the 14-year-old driving sensation is making the big move up to the 358-Modifieds. Yankowski is making Big Diamond Speedway his home for Friday night action. Saturday nights will find the driver out of Troop, Pa., running at the Grandview Speedway. Yankowski talked about his thoughts on moving up to the premier Modified division.

“I think we’ll be alright,” mentioned Yankowski. “We got a little bit of experience in the Modifieds last year running three or four races towards the end of the year. We learned lot in those races, so we’ll see what happens.”

Making the big jump up in class puts Yankowski racing with drivers who were his heroes not too long ago.


“It’s definitely something that when I was four or five years old, I would’ve never thought I would be racing with them at this age,” explained Yankowski. “But it’s a cool experience to have watched them as I’ve grown up as much as I could’ve. Guys like (Jeff) Strunk, (Duane) Howard and (Craig) Von Dohren or any of them, you hear about them all of your life and now to race against them is a cool opportunity. It’s something I couldn’t have imagined a few year ago for sure.”

Although moving up to the Modifieds is going to be a big learning curve, Yankowski thinks racing at Grandview Speedway will be the harder of the two tracks to conquer.

My biggest concern is trying to acclimate myself to Grandview,” Yankowski stated. “Grandview is a hard track to get used to.  It blows off and gets slick and can be hard to pass at times. I have a lot of laps around Big Diamond, so I think I’ll be alright there, but Grandview will the tough one that I will have to learn to get a hold of. Grandview is a real racy track and you have to be able to adapt to the track quickly and keep up with the set-up or you’ll find yourself running in the back.”

The team will utilize TEO Chassis’ with motors built by Jeff Murray. Sponsors for Yankowski’s efforts are Bilstein Shocks, Winters Rears and Fire Management Control of Pennsylvania, Inc. Without out a bigger motor available to run in the Short Track Super Series, the team will concentrate on just running the two Pennsylvania speedways for now. If a motor does become available, the team will not hesitate to do some traveling.

Speaking with the young Yankowski, the kid has a confidence in himself well beyond his years but understands the situation as it is pertaining to his youth. He definitely has a bright future ahead of him it will be a pleasure to watch his ascent in the racing world.

Gular Expanding his Racing Endeavors in 2019

Mike Gular has an outstanding year in 2018 in winning the Grandview Speedway points title along with a fourth-place finish in the STSS North standings. His season was capped off by winning the “Hard Clay Finale” last October and taking home the big $10,000 first place prize. After a busy off season that saw Gular attend the NASCAR Short Track banquet at the NASCAR Hall of Fame, the Boyertown, Pa., driver is ready to get back at for 2019.

The team is set to call Grandview Speedway their home for Saturday nights and again the team will travel the entire STSS North and South Series. Gular will be in a different car for Saturday’s at Grandview as last year’s winning car owner Rich Stankewicz has sold all of his equipment and retired from the sport. This season, Gular will drive for owner Terry Fanascht everywhere as the team looks to build on last year’s success.

“We have a busy schedule set for this year, just like last year,” explained Gular. “We’ll do the same Saturday night deal at Grandview along with some other special events. We’ll do the both the STSS North and South series like we did last year. We’re going to try and do some more racing on Hoosier Tires this season as well. We’re going and try to do the whole Eastern States Weekend this year and do some other 200 lappers as well. I’m not 100 percent sure yet, but we would like to go to Oswego for Super DIRT Week, one of Terry’s (car owner Terry Fanascht) goals is to do that.”

Gular went on to discuss that it’s a good time to be in Modified racing right now with the purses being offered and it would be foolish not to support the shows that are offering those increased purses.

“The purses being offered for the big-blocks right now are just incredible,” cited Gular. “We’re building a brand-new big-block motor right now, so we’ll have a second big-block to use. About mid-season we’ll start building a new car so we’ll have a fresh car for the end of the year which will about max us out as far as having room in the shop. Right now, we have four cars and by the end of year we’ll have five after we put the second big-block together. It’s a really good time to running them, there hasn’t been a time like this in years and I’m lucky to have the opportunity to do it. The promoters have stepped up their game with the purses being offered and have made it look good for the owners who have put their money into the sport. An owner will never get the money back that they put into a Modified, but it helps justify it a little the money they are putting into the cars. It’s hard to put $50,000 into a motor and then go and race for maybe $2,000 to win every week, but with the increased purses it makes it at least a little bit better.”

Gular and his team will try to support as many of the big money races throughout the season and will try to take advantage of the money being offered to the team and Gular offered his thoughts on the sudden increase in the money the sport is offering these days.

“I can say flat out if it wasn’t for Brett Deyo, none of this would be happening,” he said.  “Because why would pay somebody more that you have to and what’s happening now is a trickle-down effect. Guys are going to go race where the money is. It sucks when tracks are stubborn. I love Grandview, but sometimes they can be a little stubborn when it comes to giving guys a night off, but you have to put up or guys are going to go where they want to go. Look, if they are going to offer $100,000 to win that race at Orange County in August like we are hearing I am going to be there. We might never have the chance to race for that kind of money ever again, so I am going and if you have a competitive enough car to do it you are nuts for not going and trying. Big Diamond has some big paying shows this season, so we’ll definitely hit up some of their show. We haven’t etched out a final schedule yet because we only have so many crew guys and we only have so many days off from work so that can be a little bit of an issue at time.”

Running at tracks last year that Gular may have run very little or not at all at has made him a better driver and he noted it should only help him be a better driver in 2019.

“It definitely helped me as a driver,” commented Gular.  “It gets you out of that funk of driving the same night and same track every week. As a driver, it makes you have to think more and open yourself up to different set-ups and ways to make your car better. We did really well on the STSS North region last year but struggled big time on the South Series. We started out the year on South, but I think as the year went along, we started to get and came up with a nice baseline to start out with this year. The race at Port Royal was a good one for us so I think we can use what we learned there to get a good start for this year. It’s been a long time, hell I’ve never run a big-block on a regular basis so that takes some time getting used to.”

Driving full-time on the Super DIRTcar Series this season for owner Ray Graham, Danny Johnson will be behind the wheel of a TEO Pro Car for the first time in quite a while. Having the Doctor chauffeuring one their cars this season is a big boost for the long-time chassis make and Matt Hearn is pleased to have Johnson on their team.

“I am really looking forward to having Danny driving one of our cars this season,” explained a beaming Hearn. “Watching Danny and of course Brett (Hearn) race my whole life growing up, I’ve always looked up to Danny and how he drives, and I think he will really be a big threat this year. In the last couple of years, we’ve been lucky enough to work with some really awesome teams and drivers like Jimmy Phelps, Max McLaughlin, Brett and now Danny. I think it’s opening up a whole new aspect for our cars and for Northeast racing. I think it’s really going to help promote our stuff. We also have Anthony Perrego driving as a teammate to Danny on the Graham team and Anthony is the future of our sport. Just look what he’s done already in his short career and he’s only 24 years old. The future is very bright for TEO Pro Car and really looking forward to getting the year started.”

As always, I can be reached for any questions or comments at dirtracefan25@hotmail.com or on Twitter @dirtracefan25