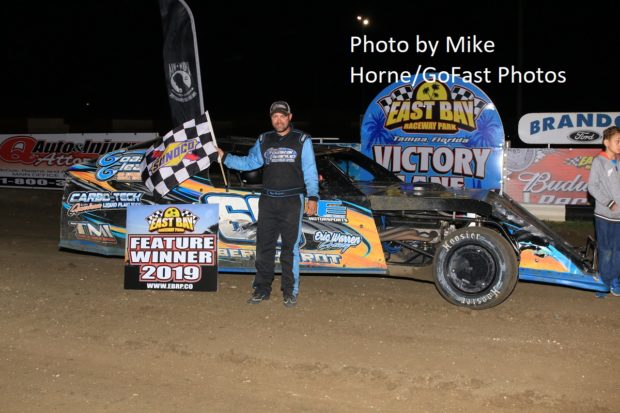 GIBSONTON, FL – Two-time defending East Bay Raceway Park Modified champion Bryan Bernhardt scored one for the local racers with a convincing victory in the 25-lap A-Main to kick off the 43rd annual Winternationals. ”I am thankful I can run with these guys,” Bernhardt told Chris Stepan in Victory Lane. “I want to thank the fans for coming out here tonight to be a part of this.”

Bernhardt was involved in mid-race incident with leader Shane Burrows that saw the two get together on the frontstretch. Bernhadrt was able to continue while Burrows sat stationary, relegating Burrows to the tail while Bernhardt inherited the lead. “It’s the last thing I wanted to do was to tangle with Shane. I hope we can work it out because I enjoy racing with him and these guys.”

Bernhardt led a contingent of five Florida racers in the top five and was pleased with the news. “We get no credit for racing here,” he said. “We really have to race some of the best every week and it’s tough.”


A field of 50 Modifieds, representing 14 states, kicked the first of four nights for the Modifieds.

Dennis Williams backed up an adventurous Street Stock heat race with a spirited run to the front to claim the 15-lap feature. Williams grabbed the lead with an outside pass on lap 6 and moved on to the victory.

The racing action continues Thursday, Jan. 24 with hot laps followed by Modified qualifying, Street Stocks hit the track first for heat races with Modified preliminaries next up. B-Mains set the stage for the A main competition.