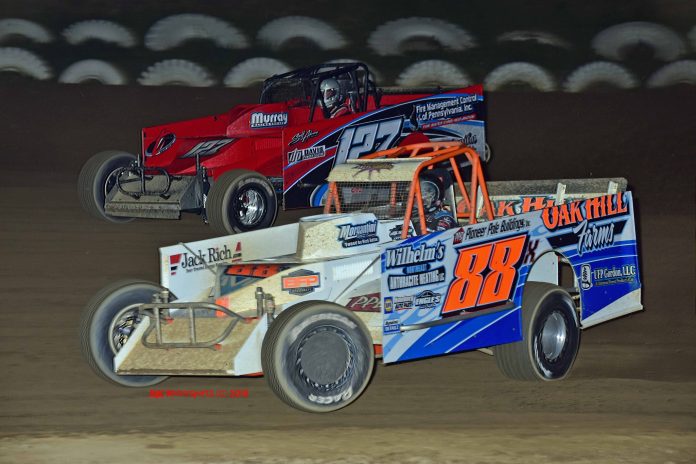 MINERSVILLE, PA – 2019 is shaping up to be a record-breaking season at the Big Diamond Speedway. It will only be a few short months before we hear the roar of the engines to start up the new season. When the teams unload for the new season, they will notice some changes to the dirt oval nestled up in “God’s Country”. Promoters Jake and Jasmine Smulley have added additional lighting in turns three and four along with a new red clay surfaces which was applied before the harsh winter settled in.

With record breaking purses being offered this season, especially in the 358 Modified division, it is looking like Big Diamond Speedway will be the place to be on Friday nights come spring and summer. The track improvements and big money shows are not going unnoticed by the teams, drivers and fans. This past weekend at the Motorsports show is Oaks, PA there was a buzz of activity at the speedway’s booth. Other than our regular Friday night Modified drivers like 2018 champion Duane Howard, Craig Von Dohren, Ryan Godown, Jeff Strunk, Billy Pauch Jr,Kevin Beach, Scott Albert just to name a few the track has received confirmations that former track champion Rick Laubach will return this season as will Brett Kressley. Other drivers who have said they will call Big Diamond Speedway home for Friday nights are Matt Stangle, Frank Cozze, Tim Apgar and Jared Umbenhauer. Teenage sensation and 2018 Sportsman champion Alex Yankowski will be making the jump to the modifieds as well this season.

After a couple of pre-season practices and enduros on Sunday March 31st and Friday April 5th which will open to all classes the season opener will take place on Friday April 12th with a 30-lap feature for the 358 Modifieds paying $4000 to the winner as part of Schaeffer’s Motorsports Night. The Sportsman will also be part of the opening night action with a $1000 to win 20-lap feature along with the always entertaining Road Runner and Street Stocks.

Keeping the big money rolling, week two will feature the annual “Money in the Mountains” race for Modifieds. It will be Fire Management of Pennsylvania night with a 60-lap feature event paying a cool $10,000 to the winner. This year’s race will run under the same rules as the Short Track Super Series (no sail panels). With most tracks not yet starting their season along with the big money being offered this race should bring out the very best teams in the Modified division. Duane Howard was last year’s MITM winner after a close battle with Jimmy Horton.

The very successful “Topless 40” will return once again in 2019 on Friday May 3rd with a $5000 payday to the winner as part of No Sweat Service Group night. The teams seemed to have fun with this race last year and it offers the fans a different perspective of their favorite drivers as the manhandle their machines around the speedway.


The popular USAC Wingless Sprint Cars will make their first of three visits on Friday May 17th along with the Sportsman, Road Runners, Street Stocks and 600cc Modifieds as part of Eash’s Towing & Recovery night. The USAC Wingless division will return once again on Kid’s Night on June 7th and again on Jeep Night on July 19th. This division put on some great racing last season with Big Diamond’s own Modified standout driver Ryan Godown besting the field for his first ever USAC win during one their appearances in 2018.

The mighty United Racing Club 360 Sprint cars will hit the speedway on Friday May 24th as part of Insinger Performance night and then return on Friday night June 21st for Red, White and Blue Autos night. The 358 Modifieds will be part of both shows making the those night’s a must to attend.

The Sportsman division will be the headline division on a couple of occasions in 2019. The first time will be Slifko Service Center night on Friday May 31st which will also be Bike Night at the speedway and again on Friday July 26th as part of First Responder night.
The Brett Deyo promoted Short Track Super Series will make its annual visit to the speedway on Tuesday night June 4th. This race serves as the only combination race for both the North and South series and always draws a tremendous amount of Modifieds. Before last years surprise rainstorm hit the speedway a total of around 50 Modifieds had signed in for the 2018 “Anthracite Assault”.

Savage 61 will be the presenting sponsor for the night on Friday June 14th when the Road Runners will run a $661 to win feature race along with a cash dash. The Modifieds and Sportsman will also be on the card.

It will be College Night on Friday June 28th as well as the Kamp Memorial headlined by a $4000 to win feature event for the Modifieds. The Sportsman division will also race for some extra money on the night with a $1000 to win feature.

The annual George Stevenson Memorial race will take place on Friday July 5th with a 50-lap feature event for the Modifieds paying $5000 to the winner. The night will be sponsored by B&H Landscaping and feature a huge fireworks show to celebrate our nation’s birthday.
The Street Stock division will race a special $2000 to win 40-lap feature event on Friday July 12th as part of Ladies Night. The Modifieds, Sportsman and Street Stocks will make up the balance of the night.

Hunt the Giant night returns again to the speedway on Friday August 2nd with free ice cream for everyone while supplies last.

It will be the Fayash Memorial sponsored by U.S.S. Achey night on Friday August 9th featuring a 30-lap feature event for the Sportsman division with $1,570 going to winner. It will also be Backpack Giveaway night as the kids prepare to head back to school.

Friday August 23 will be the annual Prelude to the Coalcracker race. This year’s race will be 50-laps in length with a $5000 check awaiting the winner. This race will help set the stage for the biggest Coalcracker weekend ever presented at the speedway.

Coalcracker weekend at Big Diamond always signals the end of the racing season at the speedway. That will be no different this year, but the stakes have been raised when the Smulley’s announced that this year’s race will be a 100-lap race with the winner taking home an unheard of $17,000. This will be the biggest prize ever offered for the speedway’s signature race and it is sure to draw the attention of all the northeast Modifed teams. But before the Modifieds take center stage on Sunday Sept 1st, the track will host Free Pig Roast night on Friday August 30th featuring the Sportsman Coalcracker 40 with $1800 to win. It will be a busy weekend with many divisions taking to the track over the course of the two days.

The Central PA Legends cars. Vintage cars and 600 Modifieds will also make frequent visits to the Big Diamond this season to showcase their always exciting style of racing.
When the racing ends after the Coalcracker weekend the track will not shutdown entirely for the season as they will present the Fall Season Kickoff on Saturday September 14th and Sunday September 15th. There will be pumpkins, corn stalks and hay bales available along with games for the kids, food and much more.

After a very popular debut last season, the Monster trucks will return in “Monster Truck Madness” on Saturday September 21st and Sunday September 22nd. The weekend will feature the championship winner trucks Ice Cream Man, Razin Kane, Xterminator, Wolf’s Head and Buckshot. Saturday will also feature a Figure 8 race and on Sunday there will be an 8 Cyl Demo Derby.

On Sunday October 6th there will be swap meet at the track with anything racing or automotive related being welcomed.

Click on the below link to check out the complete Big Diamond Speedway 2019 schedule. http://www.bigdspeedway.net/schedule.html

Big Diamond Speedway would like to welcome our division sponsors about for 2019. The Modifieds will have a new sponsor this season with Insinger Performance coming on board for the new year. U.S.S. Achey will once again return as the sponsor of the Sportsman division. Savage 61 also returns in 2019 as sponsor of the Road Runner division with Eash’s Towing and Salvage joining the Big Diamond team this season as sponsor of the Street Stock Division. Don Murphy of Murphy Fabrication will sponsor a hard charger bonus of $25 each week for the Street Stocks. Without our sponsors, none of this would be possible and we are grateful for their involvement with the speedway.

The above listed events are subject to change. For more information regarding Big Diamond Speedway including points and photos along with the complete 2019 schedule please visit Big Diamond Speedway’s new website at www.bigdspeedway.net
2019 Media Credential applications will be available on the website and must be filled out completely and either mailed or emailed to the address listed on the website.