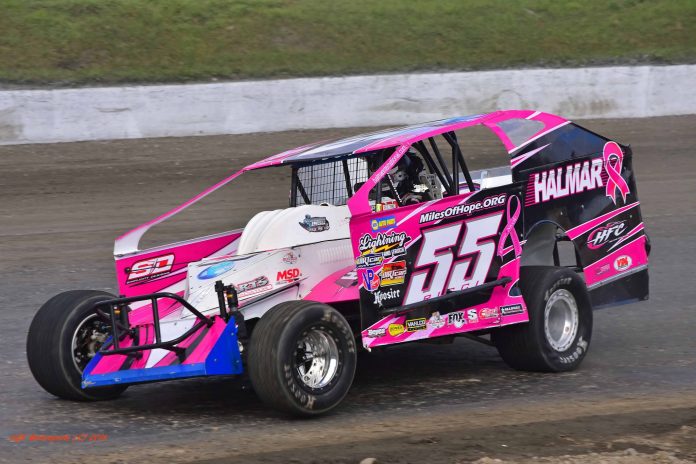 For Allison Ricci, the 2019 season is about one thing: winning.

The New Paltz, N.Y., driver is beginning her third season behind the wheel of a small-block Modified for the Halmar Racing team. Since moving into the Modified ranks she’s been close to capturing a win, but she just hasn’t been able to break through. That is something she hopes to rectify during this summer.

“I just want to get the monkey off my back,” stated Ricci. “I would like to finally win a race. I’ve been so close. It just sucks. I know we have the power, the sponsorship and the knowledge to win a race, but it’s hard in the small-blocks.”

She’ll have plenty of opportunities during the upcoming season as plans have been made for an ambitious schedule. She’ll compete in weekly action at the Accord Speedway as well as at the Orange County Fair Speedway in the small-block division. When Orange County is off she’ll head north to the Fonda Speedway. All of that will be joined by her first ever assault on the Short Track Super Series as she’s committed to running the entire North Region. There is even the possibility of some DIRTcar events and a trip to Super DIRT Week.


This is Ricci’s first chance to run the entirety of the Short Track Super Series. She’s excited about the opportunity as the team has recently improved her chances as she now has two different motor combinations for the season. She has both an open and a spec small-block built by Performance Engines by Billy the Kid to bolt into her No. 55 HigFab Chassis.

“It’s definitely awesome to have the opportunity to race that whole series this year while having the motor to stick with the guys,” cited Ricci. “I know we can be competitive. Now it’s just getting the car right.”

Running with the Short Track Super Series will take Ricci to several new venues that she hasn’t visited in the past. Coming into this season has has only run her home tracks of Accord and Orange County with the tour. Now she’ll have the chance to compete at several new venues.

“I’m excited to try something new,” she said. “It will be fun going to Outlaw Speedway, Thunder Mountain (Speedway) and Big Diamond (Speedway). I know my dad is excited to go up and watch at Woodhull (Raceway). It’s going to be a lot of fun.”

Although she lacks experience on the tour, Ricci has high expectations for the series. She also has high standards for weekly action at the Orange County Fair Speedway. She has set some lofty goals.  Both are attainable with consistency, which is something she knows she’ll need if she is going to reach them.

“Hopefully I’m consistent enough to do well in the points,” mentioned Ricci. “It would be nice to get a top 10 in points with the series even though I’ve never run that before. I’d hopefully like to get a championship at Middletown. It’s going to be hard. There are a lot of good people there. I had a good season last year, but we had a lot of rainouts and that hurt. I was as high as fourth in points before a couple bad weeks. I ended up eighth.”

Ricci will continue here involvement with the Miles of Hope Breast Cancer Foundation. The foundation goal is to offer support services and outreach for people affected by breast cancer in the Hudson Valley. Information about organization can be found at https://milesofhope.org.

Like year’s past, all of Ricci’s winnings will be donated to the organization. She’ll also run a special paint scheme starting late in the season to raise awareness.

“The foundation is awesome for what they do for people that have the terrible disease cancer,” stated Ricci. “They are great people to work with. This year we’ll have shirts and a couple of others things to sell to raise money for the foundation. All of the money I win gets donated. Hopefully we’ll crack $10,000 again.”

Ricci definitely has her work cut out for her with all the traveling to new venues, but the 24-year-old has had success, just not the wins to show for it.  There is no doubt that this year should be the year she finally gets the monkey off her back.